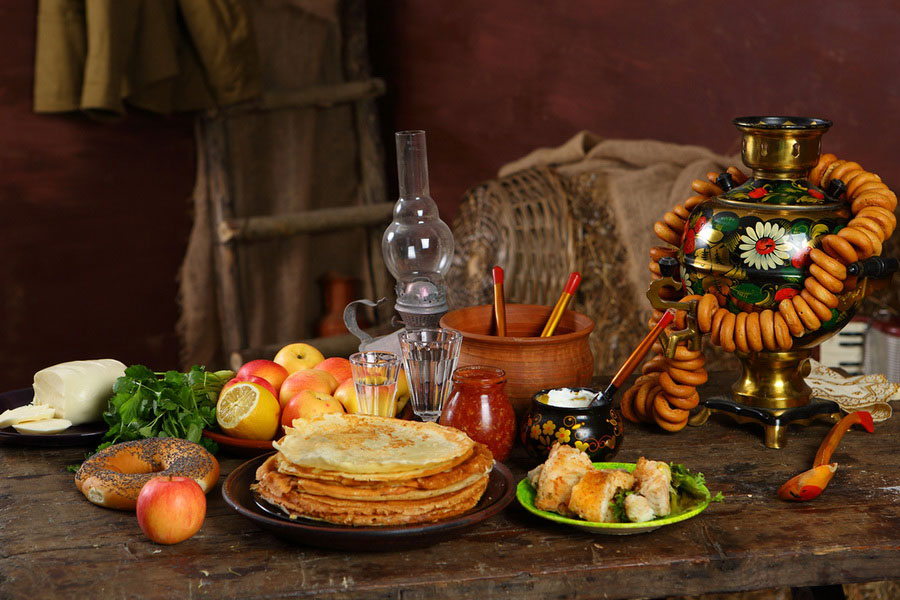 Russian national cuisine is as integral a part of the country’s heritage as its world-famous monuments and abundant natural resources. Traditional Russian cuisine is rich in recipes for pies, pancakes, jellies and pickles, yet the old Russian adage, "Soup and cereal make a meal," makes it clear which foods were most common among Russian peasants. Today, however, all variety of local fare can be found in homes and cafes across the land.

The internet is replete with videos of foreigners tasting Russian jellied meat, borscht, “herring under a fur coat” salad and dumplings, but it should be noted that Russian dishes are far from the only foods which are enjoyed in the country. Many dishes now popular in Russia were actually borrowed from neighboring peoples: Bashkir and Tatar traditions influenced Ural cuisine, while along the Volga the recipes of the Chuvash, Mari and German peoples who settled in the Volga Region in the late 18th century left their mark on local dishes. Recipes from the Caucasus reached the south of Russia, while the proximity of far east Siberia to the Pacific Ocean led to the preparation of borscht with seaweed, fish soup from salmon and dumplings with squid.

The most popular ethnic foods in Russia are Tatar and Ukrainian cuisine, the first because the Republic of Tatarstan is part of Russia, and the second due to the two nations’ shared Slavic origins. Caucasian cuisine is also well loved, and in Moscow and other large cities you can find numerous “khinkali houses” where tantalizing Georgian dumplings are served. Uzbek cuisine has also grown in popularity in recent times, and now Uzbek restaurants are serving up steaming plates of pilaf, samsas and shish kebab all across Russia.

Read on to learn more about each of these five culinary traditions whose dishes must be tasted during your Russia travels. 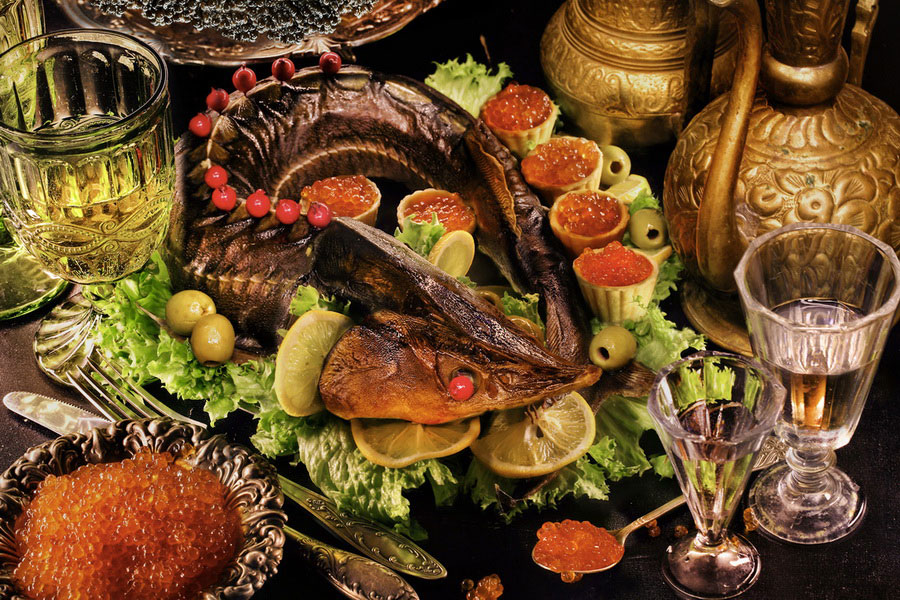 Healthy eaters will appreciate the variety of vegetable soups and porridges found on the Russian menu. Those up for something more adventurous can dig into a whole baked sturgeon reminiscent of imperial Russian cuisine, while visitors with a sweet tooth will find it hard to resist the large variety of soft pastries and fresh jams. Other Russian comfort foods include savory baked goods such as kulebyak, satisfying pies stuffed to the brim with meat, mushrooms or fish.

Historically, Russian cuisine was both seasonal and regionally specific, having developed around the availability of local grains, berries, fish, mushrooms, root vegetables and greens. Today, however, most products are available year-round, making it possible to enjoy the full range of Russian cuisine at any time of year and in almost every region of the country. 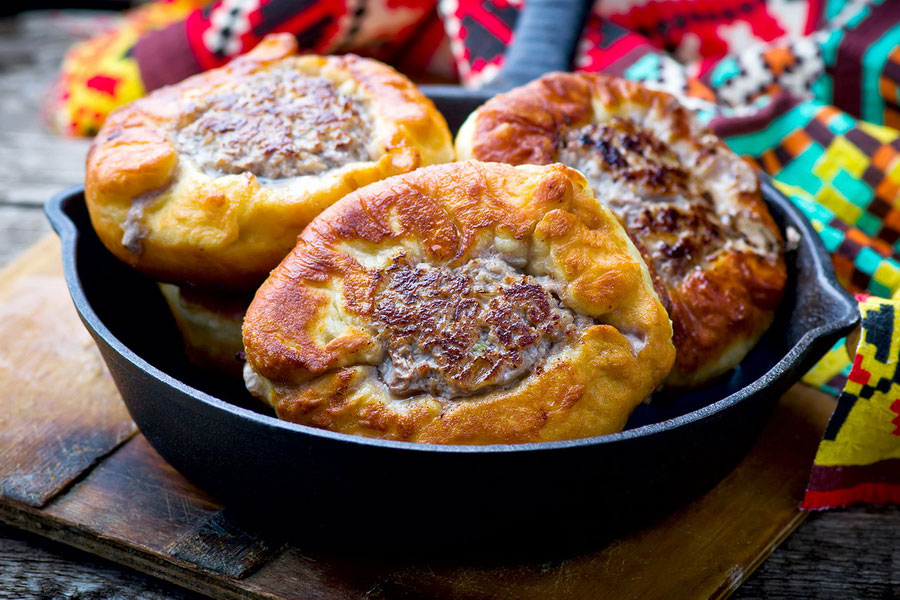 Tatar cuisine is a unique phenomenon, for although the Republic of Tatarstan is part of the Russian Federation, most of its traditions were formed under the influence of Turkic tribes. This naturally had an impact on its culinary creations, and to this day Russian and Tatar cuisine widely differ from one another, albeit with a few similarities.

Tatar dishes are typically quite filling and include many traditional dairy and meat dishes. Unlike Russians, most Tatars are Muslim and therefore do not eat pork. Lamb, beef and horsemeat are thus the staples used in local recipes. Although soups with a high fat content are traditional, nowadays there are many lighter options, such as a chicken noodle soup called tokmach.

Azu, one of the most famous dishes in Tatar cuisine, consists of delicate chunks of meat which are fried with vegetables and often tossed with slightly salted cucumbers for a melt-in-your-mouth combination of flavors. Azu is traditionally served with a rice porridge but can also be paired with other garnishes.

As the formation of Russia is closely tied to Kiev and peoples of both nations share a Slavic heritage, Ukrainian and Russian cuisines naturally share much in common. Even the famous beet and beef borscht soup, which many assume to be a Russian dish, actually originated in Ukraine.

The achievements of Ukrainian cuisine are not limited to beetroot soup, however. Other beloved foods of this grain and starch-heavy diet include stuffed potato zrazy, deruny potato fritters, fluffy pampushky rolls and varenyky dumplings. Some Ukrainian dishes still retain ties to their geographical origin, such as chicken Kiev cutlets and Kiev cake.

Another defining features of Ukrainian cuisine is its abundant use of pork and pork fat, or salo. The latter may be eaten raw, salted, boiled, smoked, fried, rubbed with pepper or mixed with garlic. Salo used to be added to dishes containing other types of meat in order to make them juicier. Today however, most Ukrainian restaurants are following the global trend towards healthy eating and thus refrain from adding salo to their food.

Ukrainian pastries have a lot in common with Russian baked goods, although nearly identical dishes will often be called by two different names. For example, crepes in Ukrainian cuisine are called nalysnyky, while in Russian they are known as blinchiki. Both Russians and Ukrainians are known for their fluffy, flavorful cheesecakes and braided yeast bread called kalach. The cakes and sweet breads of both lands will often be made or filled with fresh sour cream varieties. 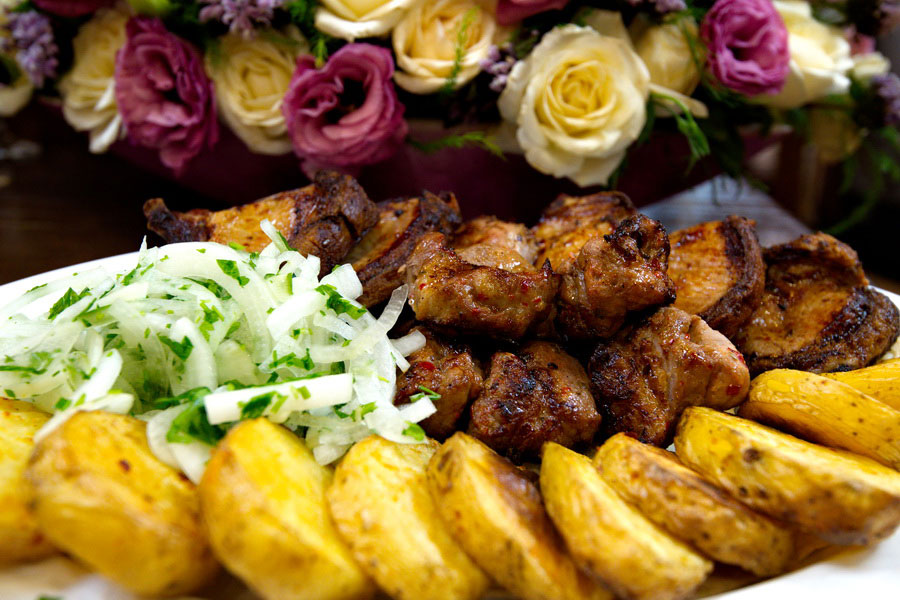 The Caucasus landscape encompasses mountain ranges and seas, foothills and green plains, and this diversity has lent itself to plenteous natural resources and diverse national dishes.

Caucasian cuisine is so tasty and varied that everyone can find a dish which they will love. In Russia, you can taste juicy Caucasian lula kebabs, lobio bean salad, mangal grilled vegetable salad, wrapped dolma, kharcho beef stew, chahohbili chicken stew, khachapuri cheese bread and other Caucasian delights.

Be sure to try khinkali, a traditional Georgian dish of dough and minced meat which at first glance resembles Russian or Central Asian manti dumplings. Yet don’t be deceived, for khinkali is unique: it is eaten by holding its small, doughy knob as you bite and suck out the broth, after which the dough and mincemeat are consumed. As a rule, the knob is left uneaten on the plate.

The Caucasus and Russia may share geographical borders and a similar 20th-century history, yet the two regions have very distinct cultures and cuisines. As Caucasian cuisine can be found all across Russia, it is a unique and tasty experience that tourists will not want to miss. 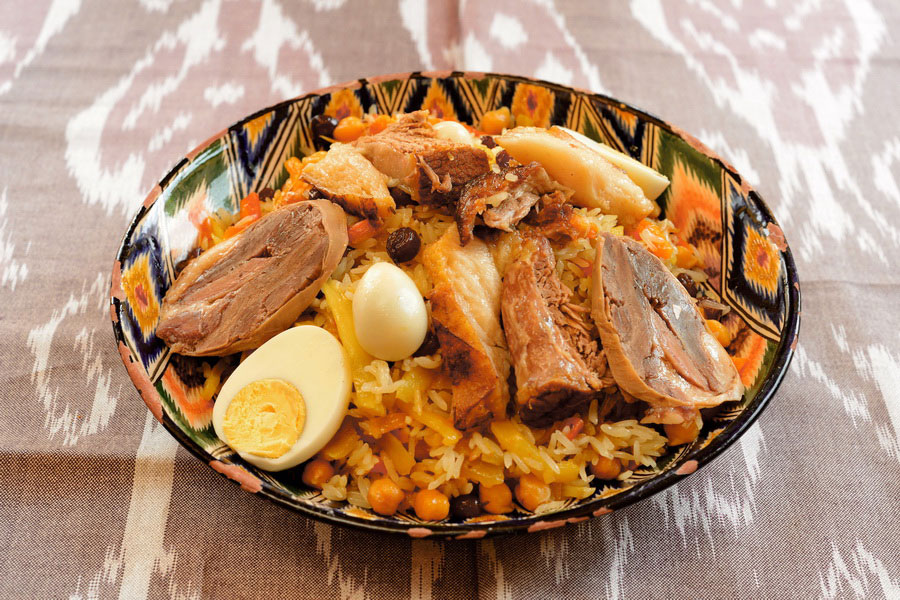 Central Asian cuisine is an oft-overlooked yet satisfying choice on the menu, and one of the most common varieties found in Russia is Uzbek cuisine. The most famous Uzbek dish is pilaf, a delicious meal of meat, rice, carrots and spices which are cooked, fried and steamed together until the flavors meld in a heavenly combination. Garlic, chickpeas, raisins and even horsemeat and quail eggs may be added for an additional treat. Traditionally cooked on an open fire over a huge cauldron, the taste of this unique dish is difficult to describe, so sampling it is a must!

Uzbek samsas are flaky mini pies made from layered dough and stuffed with flavorful beef, pumpkin (in autumn) or spinach (in spring). More recent but no less popular varieties include mushroom, chicken and potato. A favorite of many, samsas make a great snack or can be paired with a salad for a quick meal.

Many foods found in Uzbek cuisine bear resemblance to their Russian counterparts. For example, Uzbek chuchvara dumplings are similar to Russian boiled pelmeni, although the Uzbek variety may also be fried. Manti is a larger, steamed version of this dumpling which is eaten all throughout Russia and Central Asia.

f can provide a unique opportunity to get acquainted with the culture of local minority peoples and neighboring countries, and one of the best ways to accomplish this is by tasting their unique foods. Be it Caucasian, Tatar, Ukrainian, Uzbek or other fare, cuisine in Russia has the potential to satisfy every traveler.