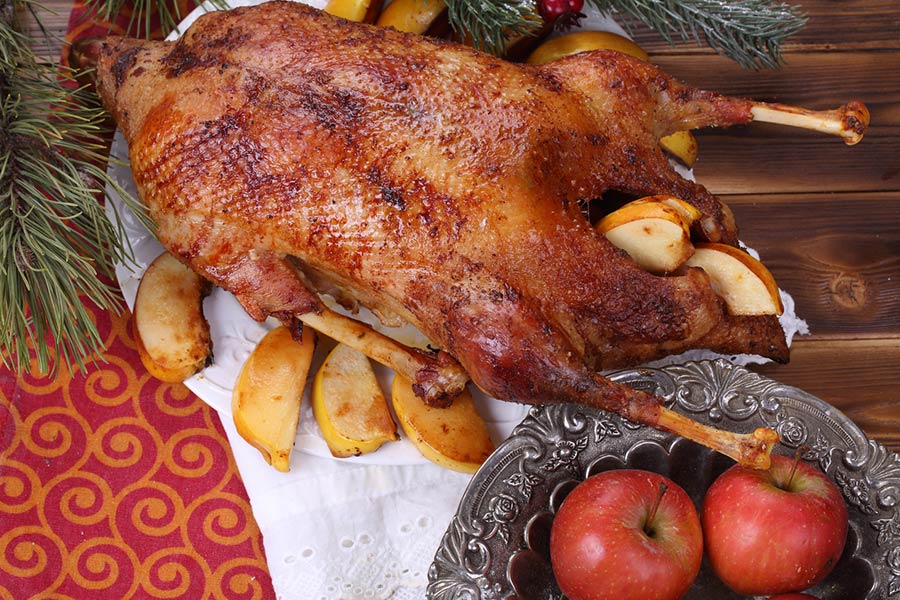 Meat dishes are a crucial part of Russian cuisine. However, meat was not eaten year-round, as meat and poultry were not eaten during fasts (and Russians used to fast up to 212 days of the year). Russian food either used ground meat (like in pelmeni) or whole meat (which could be baked, grilled, or boiled).

Traditionally, meat was either boiled or baked. Boiled meat was used for soups and porridges, and sometimes as a separate dish. Meat or poultry could also be baked, like with pork that has been broiled in an oven. Offal and organs were also popular, especially for pierogies and porridges. Only later did ground meat become more popular as meatballs and meat patties, called kotlety. Some regions in Russia also smoke, salt or cure meats to preserve them longer.

Russian foods also have lots of dishes from poultry, including domestic and wild birds. Chicken is used in porridges, while goose and duck are often used as ground meat. Main dishes and pierogies made of fish or poultry were common for the holidays at the end of fasts, including duck with apples and fish aspic. Rich families often had large spreads of Russian meat dishes, as meat was an indicator of wealth. Poorer families usually had meat only on holidays, or would only have fish and poultry.

Fish is another main ingredient in Russian foods, and an ingredient that Russian chefs used masterfully. Fish are baked, boiled, dried, smoked, and cured. Caviar is a popular delicacy, and is often salted or boiled in vinegar. Sturgeon were popular in rich households, and were often cooked whole and decorated with vegetables and sauces, and used as a centerpiece for banquets.

Even though traditionally meat was eaten fewer than half of the days of the year, Russian cuisine has no shortage of dishes with meat in them. Some recipes have changed a lot over time, but many are still popular to this day.