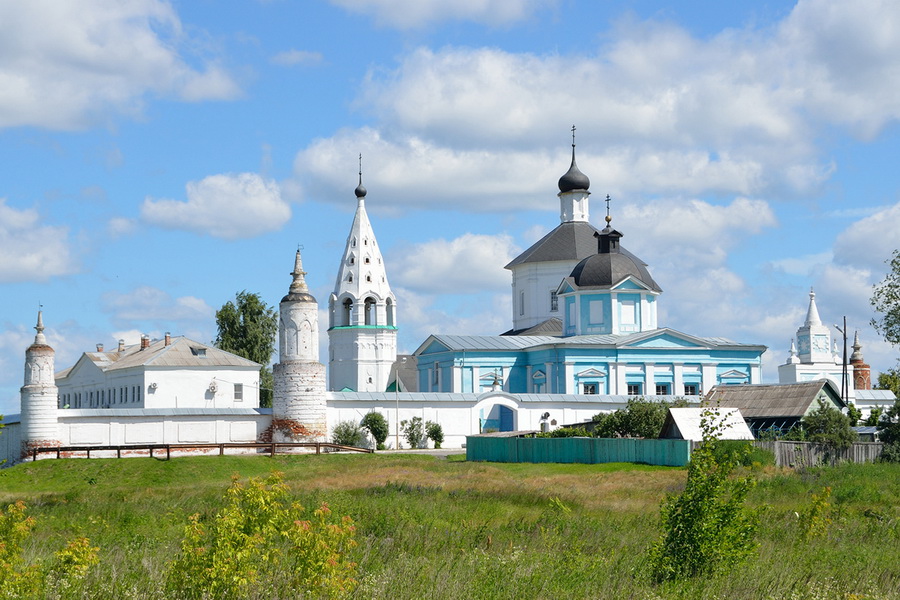 Many buildings in Kolomna and nearby villages are inextricably linked with Prince Dmitry Donskoy, the Battle of Kulikovo and Rev. Sergius of Radonezh.

The Bobrenevsky monastery was founded in 1381 near Kolomna. Mainly, It is associated with Dmitry Volynsky-Bobrenev. He was fellow soldier of Dmitry Donskoy.

The monastery is still called Bobrenevsky, named after its founder and chief builder.

The second name of the monastery - the Mother of God is associated with Victory Day on Mamai, on the feast of the Nativity of the Virgin.

Troop reviews were often held in Kolomna due to its proximity to Moscow. During the review Before the Battle of Kulikovo the commander of the Donskoy, Volynsky vows to build a monastery on this site, in case of victory over the troops of the Golden Horde. Hence the third name of the monastery is Vowed.

Unfortunately, there is no information in the sources about such an early construction of the monastery, but archaeological research confirms the early start of construction. Perhaps, before the appearance of the stone temple, a wooden church existed here for some time.

The first mention of the monastery in the annals dates to 1577. Then there was a stone cathedral and a refectory church.

Sources of this period report the desolation of the monastery. But by the middle of the 17th century, it was completely restored.

According to the officer inventory of 1757, all the buildings of the monastery were wooden, except for the Entrance Jerusalem Church and the new brick cathedral.

The main temple of the monastery - the Cathedral of the Nativity of the Virgin with a tent bell tower was consecrated in 1790.

The cloister was surrounded by a stone fence with towers according to the project of the court architect Kazakov in 1795.

Later, at the expense of David Khludov, a warm cathedral of the Fedorov Icon of the Mother of God and a two-story stone building were built. Khludov also presented extra land to the monastery.

The Fedorov Icon of the Mother of God is the main relic of the monastery. According to legend, the evangelist Luke himself created this image. This icon is the patroness of the Romanovs, so all the brides of the Russian tsars who converted to Orthodoxy became Fedorovna.

Bobrenev received the status of an independent monastery in 1865.

The monastery was closed in 1929, churches were used as warehouses for many years.

Patriarch Alexy II blessed the opening of the monastery In 1991; the reconstruction began, which continues to this day.

It’s worth a visit to the Bobrenev Monastery, its distance from the noise of the city, boundless green fields, graceful buildings give a feeling of lack of space.

A classic Russian landscape - a snow-white bell tower reflected in the water and a quiet bell ringing will definitely not leave indifferent even an experienced traveler.