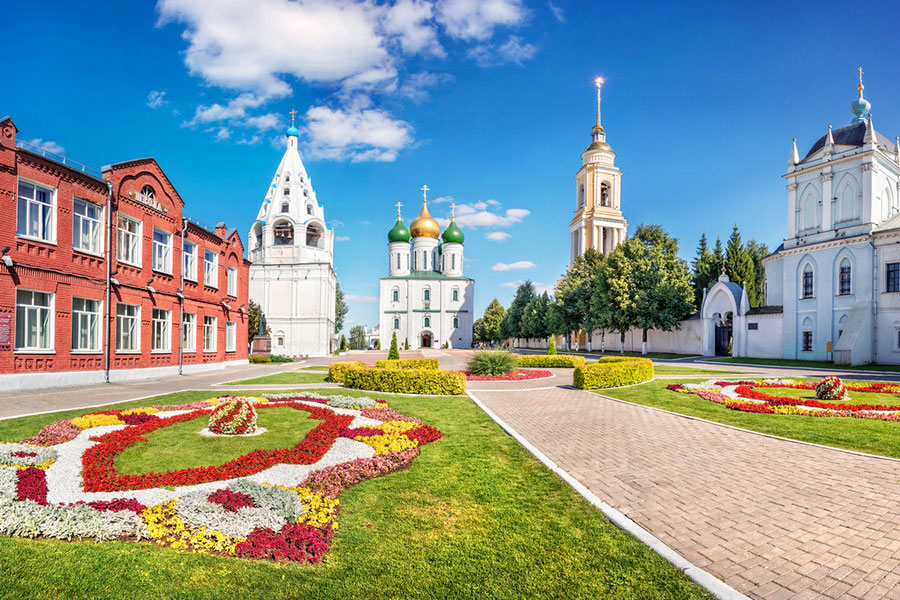 Tours, Attractions and Things To Do in Kolomna

Kolomna, Russia will delight history buffs with its ancient beauty and spirituality. Like Moscow, Kolomna was founded in the 12th century and today is regarded as the spiritual capital of the Moscow suburbs. The compact city is located 115 kilometers from the capital and is home to about 140,000 people.

The first mention of Kolomna dates back to 1177, where in the Laurentian Chronicle it is described as a trade and craft center in Ryazan Principality.

Its fortuitous geographical location at the junction of the Moscow and Kolomenka Rivers allowed the city to prosper. Merchant ships transported goods along its rivers, giving Kolomna the upper hand over more inland settlements. The Moscow and Ryazan Principalities both vied for the annexation of Kolomna, and in the end Moscow was victorious and Kolomna remains a part of Moscow Oblast to this day.

There are numerous theories on the origins of Kolomna’s name, yet the most plausible is that it derived from the old word "colomenier" meaning suburb, and is a reference to Kolomna’s proximity to Moscow.

The city is associated with many historical events. During the Mongolian invasion of Russia in 1238, Kolomna served as a fortress, a battlefield and a gathering place for Russian troops. Kolomna was also the launching point for Russian soldiers to the famous Battle of Kulikovo in 1380. The ensuing triumph for the Russians was of great national importance, for not only did they secure victory over the fearsome Golden Horde, but the many principalities which were represented on the battlefield became symbolic of the emergence of the ethnic Russian people.

The construction of Kolomna Kremlin, the city’s landmark monument of ancient Russian architecture, contributed to the strategic importance of Kolomna in 1525-31. Its fortress walls and towers were built under Basil III, father of Ivan the Terrible. Its walls were 4.5 meters thick and equipped with seventeen towers, some of which could even be moved to defend any gaps formed in the wall, making a siege of the fortress nearly impossible. To date, seven of these towers are still standing, the most famous being the eight-story Marinkina Tower, where the royal Marina Mniszech was once held as prisoner.

By the 17th century, Kolomna had lost its military and strategic importance and gradually evolved into a wealthy trade city. In 1781 the city received a coat of arms, which today is its historical symbol.

At present, Kolomna is growing as a tourist attraction. In and around Kolomna there are more than 420 monuments of national significance, and many day trips are organized from Moscow to Kolomna, a trip which can be made by train, bus or car.

A unique representation of ancient Russian architecture, Kolomna Kremlin is a must-see. It can easily take a full day to tour, so plan accordingly. In addition to the central Cathedral Square, be sure to tour the jaw-dropping Assumption Cathedral with its magnificent iconostasis, Resurrection Church, Tikhvinsky Cathedral and the unmistakable Tent Bell Tower, all situated within Kolomna Kremlin. Several historic Kolomna homes and manors complete the idyllic layout.

Outside the Kremlin are the Waterman Monument, 12th-century Church of Nikola on Posada and whimsical Old Golutvinsky Monastery. Kolomna Pastila Factory Museum promises sweet marshmallows to visitors, while Museum Forging Settlementoffers a glimpse into the city’s blacksmith industry. The Local Lore Museum provides a well-rounded look at Kolomna life and history and is the perfect way to either start or end your tour of Kolomna, Russia.