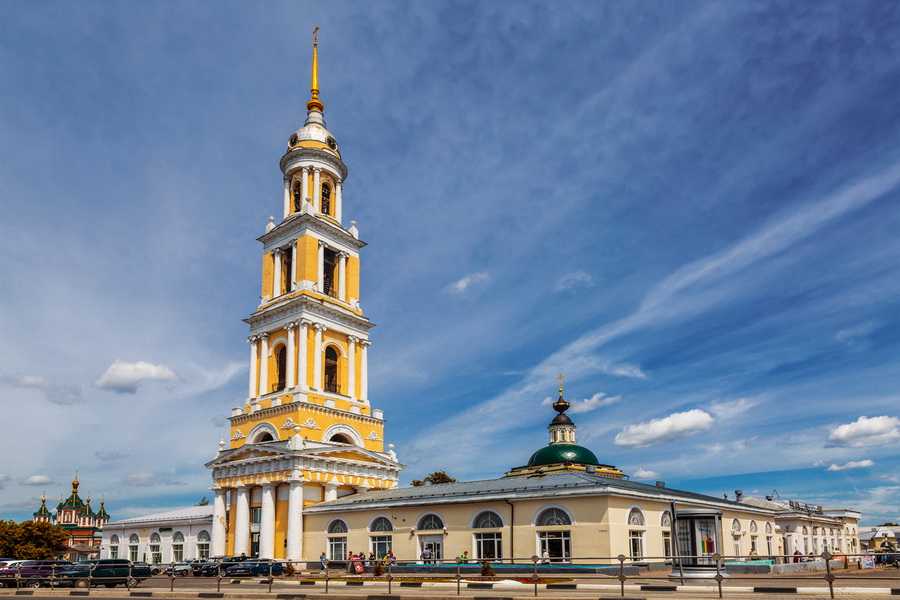 The bell tower of St. John the Apostle Church in Kolomna, Russia is an unmistakable landmark and a symbol of the Old Town which is visible from anywhere in the city.

St. John the Apostle Church is located right next to Kolomna Kremlin. The 18th-century church seen today was modeled after a wooden predecessor which was built in the 16th century but burned down some years later. Construction on a new stone church came to a halt in 1739 when the half-finished structure also suffered in a fire. Work on the church was temporarily suspended and was not completed until 1756. After Napoleon invaded Russia in 1812, St. John the Apostle Church again needed to be renovatd, and it was at this time that the famous bell tower, which remains a source of pride for local residents, first appeared.

In Soviet times, the church faced difficult trials: All valuables stored on its premises were destroyed or stolen and the building itself turned into a storage room. It was not until the end of the 20th century that the building was returned to the Russian Orthodox Church. Today, St. John the Apostle Church has regular services, a patriotic youth organization, a Sunday school and a cafeteria.

The bell tower of St. John the Apostle Church in Kolomna is built in the Empire style, its five tiers and spire rising above all other buildings in the Old Town at a height of 67 meters. The walls of the bell tower are painted yellow and its sides decorated with stucco, pediments, vases and columns. Its elegant image continues to symbolize the architectural value of Kolomna’s historic city center.