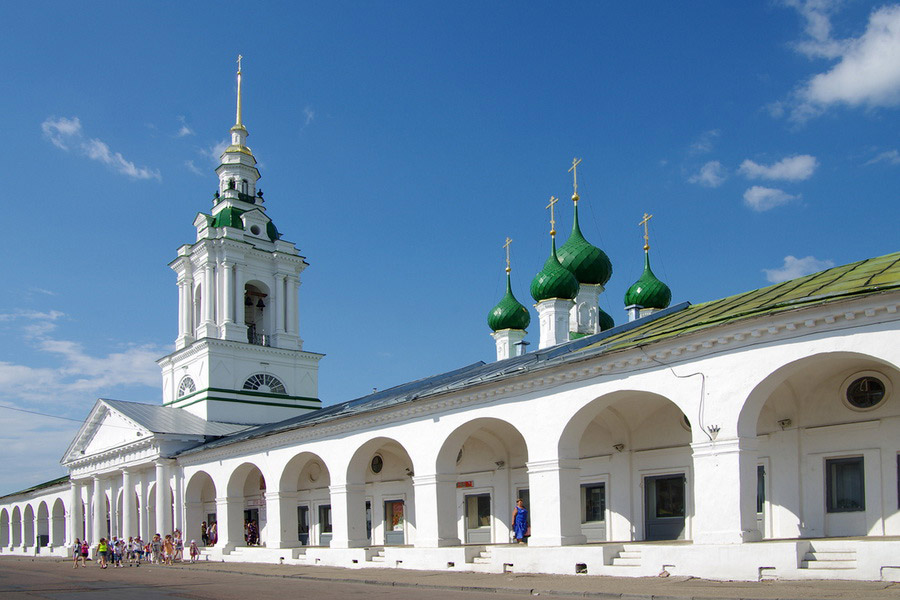 The complex took more than a century to build, and although similar shopping centers sprang up in many Russian cities at that time, only the mall in Kostroma has survived in working order to this day.

The history of Kostroma as a trade center began in the 16th century when merchants started to ply their trade on the left bank of the Volga River, directly in front of the ancient Kostroma Kremlin. Goods were delivered on the river and hauled up the bank on sledges and carts. Some years later, the makeshift retail outlets were replaced with more permanent wooden benches and warehouses.

The idea of creating stone shopping stalls was proposed after a horrendous fire destroyed most of Kostroma’s buildings in 1773. To complete this endeavor, the best classical-style architects of the time were invited to join the project.

The shopping pavilions resemble one another with their rounded edges, which made it easier for carts to maneuver the corners. Each pavilion includes a courtyard and numerous arches, behind each of which was a merchant’s shop with a display window and a private entrance, a basement and a second floor. The buildings may appear small from the outside, but inside they are quite striking in their size, scale and detail.

Interestingly, various forms of trade which are commonly used today were first tested at Kostroma’s Trade Rows, including the first self-service store. Throughout the century-long construction of the trade complex, it was expanded and improved until it become an integral part of life in Kostroma. Meetings were arranged here; deals were made and meals served to hungry shoppers. The townspeople came to hear the latest news or just to immerse themselves in the daily chaotic bustle of the market.

By 1833, the shopping mall contained 288 functioning stores. Its endless rows were often named after a key product which was sold on the aisle, such as the Big Flour, Bread, Gingerbread, Red, Butter, Dairy, Meat, Fish and Tobacco Rows.

The Trade Rows of Kostroma, which have managed to blend with the city’s historical architecture while organically integrating with its more modern structures, serve as a bridge between Kostroma’s past and present.