Cathedral of Christ the Savior, Moscow 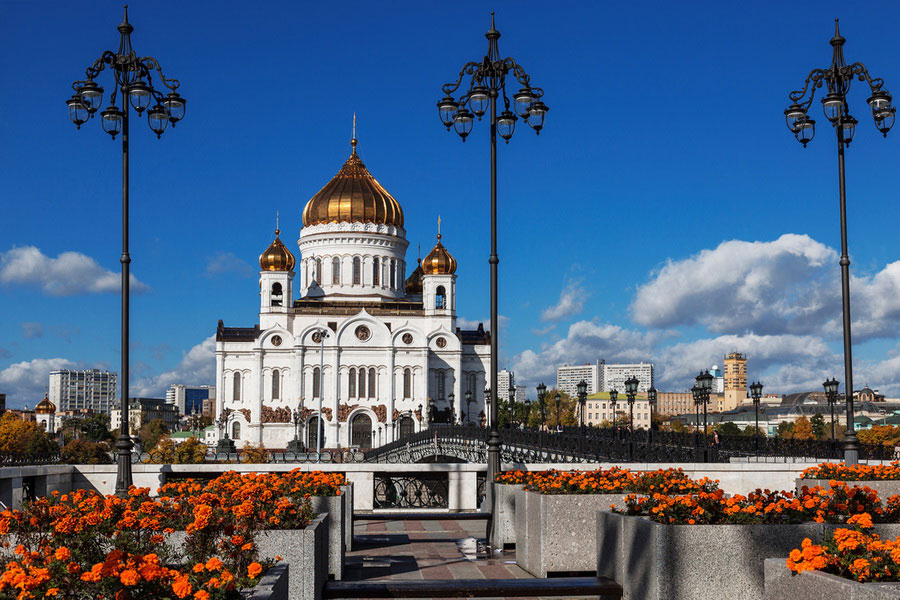 Perhaps the most famous temple of Russia is the Cathedral of Christ the Savior. There, all the solemn services in the honor of the main Orthodox holidays, gathering the believers from all over Russia are held. The monumentality and grandeur of the temple, its magnificent interiors - everything speaks about the special status of the temple and its significance for the Russian Orthodox Church. But all this was preceded by a very dramatic history.

The grand building of the temple to commemorate the victory over Napoleon's army in the Patriotic War of 1812 started in 1817 by the decree of Russia's Tsar Alexander I. The new temple was to be the embodiment of heroism of the Russian people.

The author of the first temple, the architect Alexander Vitberg, laid the temple on the Sparrow Hills. However, the mountain began to sag under the weight of building. Nicholas I, who succeeded Alexander I to the throne of Russia set the condition that the temple was to be made completed in the old Russian style, and appointed a new architect, Konstantin Ton.

In 1839 Ton started construction on the new location on the bank of the Moskva River, where the ancient Alekseevsky Convent had been standing and later moved to Sokolniki. The construction site was very well chosen: the temple was visible from any point of Moscow and stood side by side with the Kremlin.
It took several decades to complete the construction and the interior design of the Cathedral of Christ the Savior. Finally, on 26th of May, 1883 the church was solemnly consecrated in the presence of Alexander III and the entire royal family. The cathedral was laid out as a cross. Impressive was the size of the cathedral (the height of the temple was 103 m, the total area – 6,800 sq. m): it could accommodate up to 10,000 people. The rich interior of the Cathedral of Christ the Savior consisted of paintings and ornaments of stone, which were made by the celebrated Russian painters - Vereshchagin, Surikov, Kramskoi. Along the perimeter the building was surrounded by the gallery, which became the first museum of the War of 1812. The first Church of Christ the Savior existed for 48 years. Many people recalled the legend of the curse of the nun, who cursed the site of the temple construction in protest of its transfer to the new location, and foretold that no building would last on that place for more than 50 years.
The reason for the demolition of the temple was the discrepancy between its dominant ideology and the atheism in the Soviet Union. By the order of Stalin the Cathedral of Christ the Savior was blown up on Dec. 5, 1931. They planned to build the Palace of Soviets on the vacant lot. However, those plans were violated by the Second World War. The pit dug for the foundation of the Palace, was used for the construction of the outdoor swimming pool Moscow. The swimming pool lasted for 30 years. In February 1990 the Holy Synod of the Russian Orthodox Church appealed to the government for permission to restore the great temple. In 2000, the temple fully restored in its original form, was consecrated and began services. The building was put on a high stylobate, which housed the lower church, the Holy Synod and the Theological Academy, the conference room of Local Councils and a number of other services. Now there is the only museum exhibition in Moscow located in the gallery of the existing church. It consists of materials documenting the history of the foundation, construction, demolition and rebuilding of the temple. There is also the museum of the Patriotic War of 1812.

The interior of the temple corresponds to the outer greatness. The height of its inner space is 79 meters. Right on the axis of the main entrance there is a unique iconostasis in the form of white marble octagonal chapel crowned by a gilded dome. The main shrines of the Temple are the icon of the Nativity rought by His Holiness Patriarch Alexy from Bethlehem, six original restored canvases by Vereshchagin and the authentic throne of His Holiness Patriarch Tikhon in the main altar.