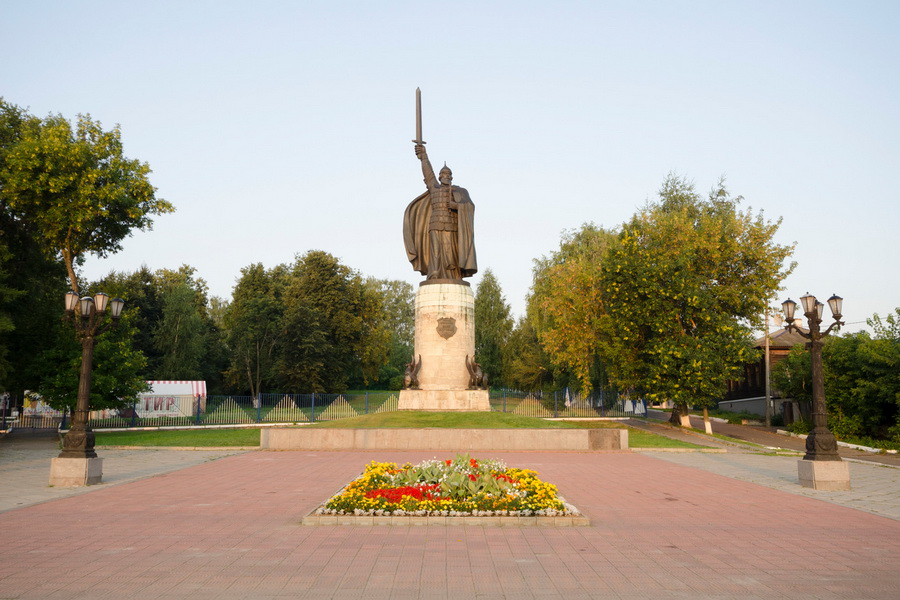 Okskiy Park, located in the heart of Murom in Vladimir Region, is one of the oldest parks in all of Russia. Situated along the Oka River, it is a favorite gathering spot for townspeople of all ages and a great place to experience the city’s upbeat family atmosphere.

The crowning glory of Okskiy Park is Ilya Muromets Monument, the world’s largest sculpture of Russia’s ancient epic hero. As the namesake of the fearless warrior, local Muromians take great pride in the statue, and there is no better way for visitors to show respect for the city than with a visit to the monument of this brave defender.

Since medieval times, the city of Murom was a strategic trading center which served as an eastern fortification for the expanding Russian State. The city’s main defense against the Mongol Tatars and other eastern raiders was the wooden Murom Kremlin, which stood on the present-day site of Okskiy Park. Murom Kremlin was surrounded by double walls and an earthen barricade. Inside these walls was a small town with residential buildings, military barracks, a prison, Nativity of the Virgin Church and other cathedrals.

Tsar Ivan the Terrible attacked the city of Kazan in 1552, an act which led to the long-awaited defeat of the Kazan Khanate. This victory ushered in an era of peace for Murom, and with it the need for its city fortress dissipated. Gradually the Kremlin fell into decay before finally being dismantled during the 18th-century reign of Empress Catherine the Great.

In 1852, Murom Prince Troubetzkoy created Okskiy Park on the site of Murom Kremlin, with Nativity Cathedral and Okskiy Boulevard serving as the framework for its construction. Nativity Cathedral was vandalized during the Russian Revolution of 1917 and was forced to close under Soviet rule in 1924. It was later transferred to the military before being dismantled stone by stone in 1939. As per custom, the Soviets renamed Okskiy Park after Lenin, although its historical name was later reinstated.

Today, the crowning glory of Okskiy Park is the Ilya Muromets Monument, one of the city’s key attractions. Created in 1999 by famous sculptor Vyacheslav Klykov, the bronze sculpture rises to a total height of 21 meters along Oka River. This scenic locale was not selected at random: Oka River once served as a natural barricade against the enemy, and the Ilya Muromets statue along its bank symbolizes the city’s fortitude and the sheer strength of Muromets and the Russian soldier.

If entering Okskiy Park through the front gate, you will find yourself on the Alley of Heroes of Murom, dedicated to local 20th-century war heroes. Other notable attractions include the giant Ferris wheel, from the top of which the city and Oka River may be seen, and a three-dimensional image of Murom Kremlin which resurrects the city’s celebrated medieval years. Entertainment options at the park are regularly updated, and plans have been laid to extend the park’s boundaries into the surrounding neighborhood.