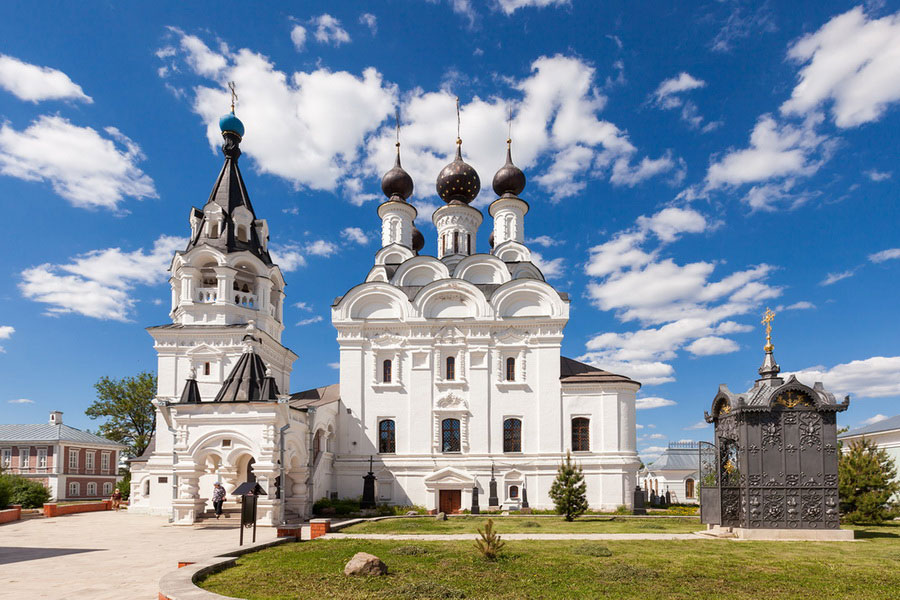 Monastery of the Annunciation, Murom

Among dense forests and oak groves, rich meadows and torrential rivers lies the city of Murom, Russia. The city sits 300 kilometers from Moscow along the hilly banks of the Oka River and forms a link in the Golden Ring of Russia, a popular tourist route comprised of a loop of picturesque, historic towns.

The word murom, meaning "high ground” or “water in the mountain" was an old Finnish word from which the Finno-Ugric Murom tribe, who lived in the area before the arrival of the Slavs, got their name. Through its name, the city of Murom has retained the imprint of its original inhabitants to this day.

Murom is one of the oldest cities in Russia and is defined by a heritage of national heroes, ancient architecture and religious devotees. The names and activities of more than twenty Orthodox saints are associated with this unique city, whose monasteries, icons, and miracle workers have long been famous throughout Russia. Epic hero Ilya Muromets, hailed for his great power and love for his homeland, was purportedly born in the vicinity of Murom. His name, reflective of his Muromite roots, is now synonymous for the strength of the Russian spirit.

Murom in the Pages of History

Murom is the historical center of Russia, an ancient city first mentioned in manuscripts in 862 AD and one of the few Russian cities that has preserved the memory of the Finno-Ugric tribes that once lived on its territory.

Even in the 6th-7th centuries, the Murom tribe had a large settlement in the very place where the city of Murom is located today. The tribe had trade relations with the neighboring Bulgars and Slavs, with valuable furs of sable, foxes, martens and squirrels, as well as beeswax and fish, being the main products in demand.

Handicraft production was poorly developed among the Murom, and gradually the settlement became dominated by Slavic artisans, and later by vigilantes. Thus, Murom morphed into a Slavic city. The first prince of Murom is considered to be Gleb Vladimirovich, who took power in the early 11th century.

By this time, Murom was ideally located at a crossroads of trade routes between Russia and Bulgaria. The city grew in importance as a trading center and has long held status as the far eastern outpost of Russia. Trade with the Bulgars, Ryazan and Chernihiv flourished in Murom under early Slavic domination, during which time the city also developed in pottery, blacksmithing, bone-carving and metalworking crafts.

Murom did not escape the invasion of Russia by the Mongol-Tatars. Due to internal fighting between the Russian princes at that time, there was no one to protect Murom against its attackers, who burned the city to the ground in 1237. Its citizens were subsequently subjugated and taxed, and more than a century passed before Murom was rebuilt in 1351. By the end of the 14th century, it was classified as one of the easternmost settlements of the Moscow Principality.

Tsar Ivan the Terrible, who was the first tzar of Russia, marched to Kazan to seize it from the Kazan Khanate in 1552. One of his numerous armies marched through Murom, which in July of that year operated as a military camp: soldiers flooded the city, setting up camp in its streets under battle flags and chopping down trees from its riverbanks to use for rafts and ploughs. Ivan the Terrible himself watched from his tent as the army crossed the Oka River, heading towards the Sakan Forest and beyond. In the ranks of this valiant army was the Murom squad, which distinguished itself in the Siege of Kazan.

During the political upheaval in Russia known as the Time of Troubles, the inhabitants of Murom took an active role in the fight against foreign invaders. In 1727, the Murom 21st Infantry Regiment was formed in the Russian army and continued as a distinct division for two centuries. This valiant regiment made a name for itself through its many accomplishments: The squadron performed its first feat in the Seven Years’ War against King Frederick II of Prussia and participated in almost all of Russian General Alexander Suvorov's Italian and Swiss campaigns. It victoriously entered Berlin in 1760 and 1813, and Paris in 1815.

As Russia’s military campaigns began to lessen, life in Murom gradually returned to normal. Trade was revived and various crafts developed. Murom fishermen supplied red fish for the royal table and its fishermen became famous throughout the country for their ability to stratify fish. At the same time, Murom’s kalach, a white artisan bread baked in a braided shape, gained recognition as one of the finest breads in Russia, an honor which it holds to this day.

After the abolition of serfdom in Murom, capitalist production began to develop. Manufacturing workshops gradually gave way to mechanized enterprises, while flax-spinning factories and mechanical and oil mills were opened in the city.

In 1845, the first steamship appeared in Murom and in 1858, a regular steamship service was established with other cities located on the Oka River. In 1880, the Kovrov - Murom Railway Line was laid. In the 1920s Murom was annexed into Russia’s Nizhny Novgorod Region and in 1944 was declared the capital of Murom District of Russia’s Vladimir Oblast (Region).

Although Murom may not receive the boatloads of tourists that other Golden Ring towns such as Suzdal or Vladimir are accustomed to, it is nevertheless a remarkable city in its own right.

The Spaso-Preobrazhenskyi Cathedral (Transfiguration Cathedral) is the oldest architectural structure not only in Murom, but in the entire Oka River territory. Located on the southern edge of the old city center, it was built in the 16th century and celebrated its 900th anniversary in 1997.

In historic Murom, one can still see 19th century trading rows located on the banks of the Oka, from which you can admire a panoramic view of the ancient Trinity and Annunciation Monasteries.

The inception of Annunciation Monastery began centuries prior to its construction. Prince Constantine, who first brought Christianity to Murom, was canonized in 1457 and buried in the city along with his wife and two children, an act which brought a holy status to Murom. In 1552 Tsar Ivan the Terrible visited Murom on his way to Kazan, where it is believed that he vowed to establish a monastery if victorious in his campaign. Kazan was captured, and Annunciation Monastery, whose architecture greatly resembles that of nearby Holy Trinity Convent, was built in Murom.

Holy Trinity Convent stands where the former courtyard of Prince Yuri Yaroslavich was once located. The princely court was rendered defunct in the 17th century and in 1642-1643, the Cathedral of the Holy Trinity was built. Shortly thereafter, with the permission of the patriarch, the nunnery was built to accompany it. The ensemble includes the Church of Kazan Mother of God and the Church of St. Sergius of Radonezh, brought to the site from a local village. There is also a bell tower which, upon its completion in 1652, was the city’s tallest structure and thus served as a guide for ships and wagons.

Today, Trinity Monastery serves as a place of pilgrimage, thanks largely to the relics it contains of Saints Peter and Fevronia, patrons of love and marriage who purportedly hold powers to heal infertility. In 2008, a monument to Peter and Fevronia was erected in front of the Wedding Palace.

Several notable houses of worship can be found near Murom’s Oka River. Nikolo-Naberezhnaya Church was founded in 1700-1714 on the site of an old wooden church. The modest Church of Kozma and Demyan was built more than four hundred years ago in honor of the saints Kozma and Demyan, whose precise identity remains unknown. Resurrection Convent, another simple complex built in the mid-17th century, includes the five-domed Resurrection Church, the single-domed Vvedenskaya Church and a bell tower.

The Murom History and Art Museum, often called the "Little Hermitage", is located in the former house of the Zvorykin merchant family. It includes an exhibition of merchant life and an admirable collection of ancient and modern works by famous local artists.

A house in Murom believed to mark the spot where the epic hero Ilya Muromets was born is denoted with a memorial plaque. A monument to Muromets, created by famous sculptor V. M. Klykov in 1999, depicts the hero in a helmet and chain armor, with his right hand wielding a raised sword and his left hand clutching a cross. The statue can be found behind Oksky Park, a popular cultural and amusement center.

Modern-day Murom has managed to retain not only its original name, but also its historical appearance. Murom is the oldest city in Vladimir Region (also known as Russia’s Region 33), having turned 1150 years old in 2012.

Visitors to this unique city will notice a sharp contrast between Murom’s historic and modern districts. Everything breathes modernity in the clean and well-maintained city center, from the shop windows to the stream of cars to the pedestrians hurrying about their business. Take a walk around the coastal neighborhoods, however, and you will feel the peaceful, quiet ambience of an ancient city. The site of ancient stone mansions hidden under dense crowns of trees, sagging wicket gates and peculiar wooden houses with carved valances is truly magnificent.

Not only is Murom one of the oldest and largest cities in Vladimir Region, it is also a major industrial center. The city is home to over thirty enterprises equipped with the latest technology, and distributes goods, such as its Murom Primers for pistols and rifles, that are known well beyond Russia’s borders.

In 2008, Murom hosted the first All-Russia Day of Family, Love and Fidelity, which now attracts tourists from around the world to its annual celebration on July 8th.

Tourists to Murom will not be disappointed by its diverse souvenirs, ranging from unique replicas of ancient maces, clubs, swords and helmets, to original dishes, leather shoes and fine linen products including napkins, towels and tablecloths.

Welcome to Murom in Russia, the ancient city woven from legends and traditions!