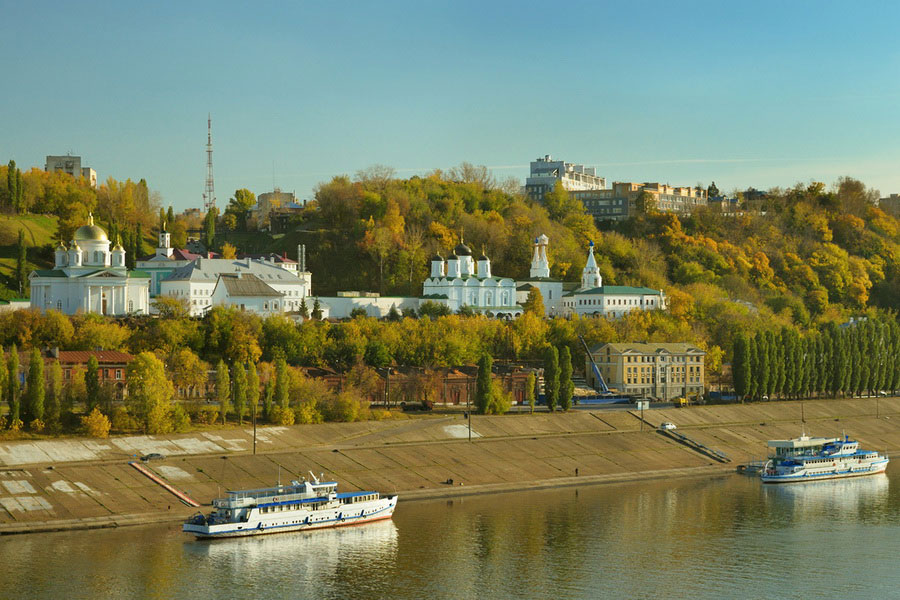 Annunciation Monastery in Nizhny Novgorod, Russia once served as the spiritual center of this robust trade city. Located on the picturesque bank of the Oka River, the monastery continues to attract religious and historical tourists with 17th-19th century architecture, a religious gift shop and beautiful frescoes and icons.

Nizhny Novgorod has long been famous for its trade fair which helped to raise the city to the status of Third Capital of Russia. After having experienced a powerful economic upswing, the city quite naturally acquired winding boulevards, picturesque parks and historic churches which residents and visitors continue to enjoy to this day.

Despite enduring devastating fires and years of neglect, Annunciation Monastery continues to serve as an active hermitage in the 21st century. Its doors remain open to those who wish to worship within its walls as well as visitors who would simply like to get acquainted with its past.

Nizhny Novgorod was founded at the beginning of the 13th century by Yuri Vsevolodovich, Grand Prince of Vladimir. According to tradition, the monastery was constructed at the same time as the city but lasted only a few years before being destroyed by the Mordovian Prince Purgas. It lay in ruins for a century before being revived by Saint Alexy, Metropolitan of Kiev and All Russia and mentor of Dmitry Donskoy, Grand Prince of Vladimir.

Legend has it that on his way to the Golden Horse to heal the khan’s wife, Saint Alexy stopped to rest on the banks of the Oka River. As he laid eyes on the monastery ruins, he vowed to build a new church on the site if his upcoming mission was successful. Miraculously, the khan's wife was healed and the saint fulfilled his promise. By the end of the 14th century, Annunciation Monastery was again buzzing with life.

Today, Annunciation Monastery is comprised of 17th-19th century buildings, the oldest of which is the stone Annunciation Cathedral. Its collection of ancient five-tiered iconostases is regularly updated with new images painted by icon masters at the monastery. The main shrines of the church are Mother of God with the Upcoming (993 AD) and Image of Metropolitan Alexy (14th century). The interior of the church is decorated with beautifully preserved frescoes which, in combination with the iconostases, create a special atmosphere.

Annunciation Cathedral is harmoniously complemented by Uspenskaya and St. Andrew Churches, the latter of which survived despite housing various civil institutions in the post-World War II years. The stone, hipped bell tower that stands between the two chapels was once decorated with a striking clock which unfortunately was damaged in a fire and never restored. St. Sergius Church, built on site of the ancient Annunciation Church, includes elements of Russian Baroque architecture. Completing the complex on the eastern side is St. John the Theologian Hospital and Church, which at one time also included a holy gate.

Also on site is a gift shop where visitors can arrange a special prayer service and purchase Orthodox literature and consecrated products. In the valley near Annunciation Monastery, visitors can see a consecrated spring called Gremyachy Klyuch. If visiting Annunciation Monastery in Nizhny Novgorod over Easter, you will even be given the unique opportunity to climb the belfry and ring the bells yourself!