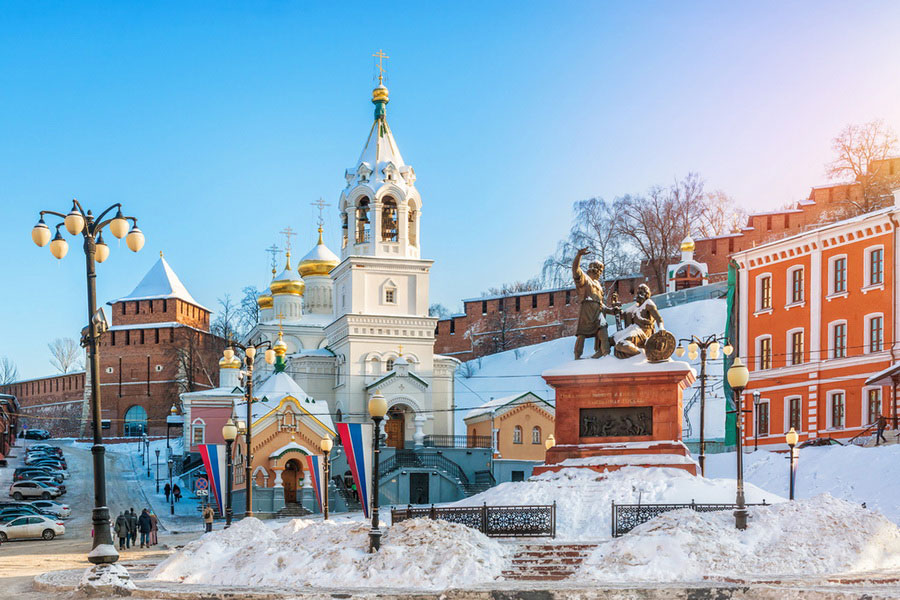 National Unity Square in Nizhny Novgorod is an important city landmark which recalls the resolve of the Russian people in the face of their medieval invaders.

Nizhny Novgorod has long been distinguished for its strategic, economic and political importance, so it is not surprising that a major nationwide patriotic movement arose in the city. After the murder of False Dmitry I (Dmitry Ivanovich) and the rise to power of Vasily IV in 1606, rumor spread through Russia that the ascension to the throne of a second imposter, False Dmitry II, was imminent. The social and political situation deteriorated rapidly as large and violent gangs of looters spread across Russia. In early 1609, Nizhny Novgorod was attacked by the troops of False Dmitry II, a move which solidified the people’s resolve to unite in opposition against the enemy. Far from a fleeting skirmish, these events were to change the course of Russian history.

After the initial formation of a slipshod militia failed, in 1612 respected local merchant Kuzma Minin stood on the site of today’s National Unity Square as he rallied the people to repel False Dmitry II and to liberate Moscow from the grip of the Polish-Lithuanian invaders who backed the imposter. Minin’s appeals led to the formation of the Second People’s Militia, an entity which would continue to play an important role in Russian military tactics for centuries. Prince Dmitry Pozharsky was elected commander of the newly formed militia, and thanks to his selfless patriotism displayed at that time, he is still a beloved Russian hero.

As the Second People’s Militia marched to Moscow via Yaroslavl, large detachments of citizens and peasants joined its forces. In August 1612, Kuzma Minin and Prince Pozharsky, together with their army and the forces remaining from the First Militia, successfully defeated the enemy near Moscow. In October 1612, Moscow was permanently liberated from its captors, and in 1649 Tsar Alexei Mikhailovich established Unity Day in honor of this victory.

National Unity Square received its current name in 2005 when the country again began to celebrate Unity Day, now a public holiday in Russia, after a 90-year hiatus during Soviet rule. The square sits adjacent to Church of the Nativity of John the Baptist and Monument to Minin and Pozharsky near the Nizhny Novgorod Kremlin’s Ivanovo Tower. Behind the square is the famous Bugrov Homeless Shelter, a 19th-century charity house owned by the merchant Nikolai Bugrov.

National Unity Square in Nizhny Novgorod continues to serve as a a monument to the Second People’s Militia formed by Minin and Pozharsky and a reminder of this major turning point in Russian history.