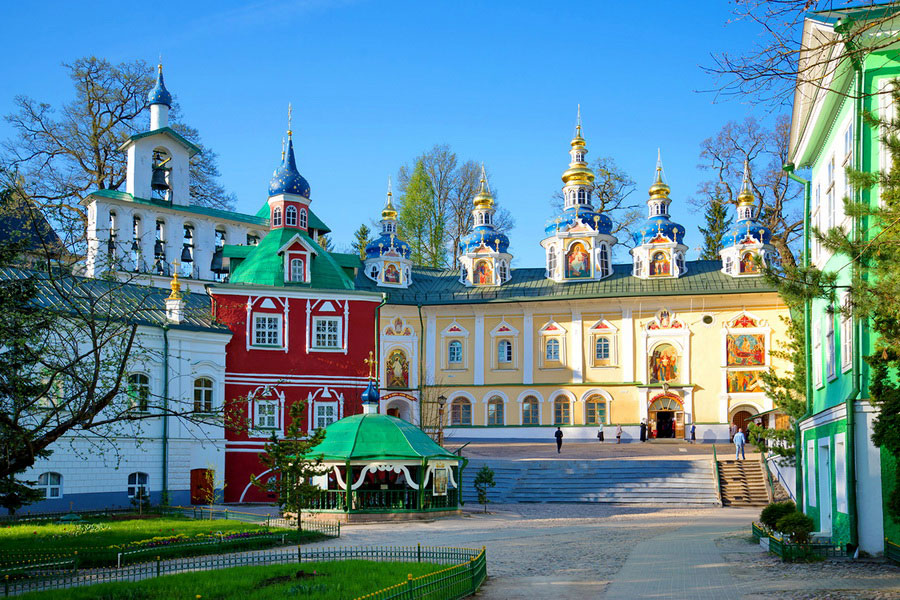 Pskov-Caves Monastery is one of the largest friaries in all Russia and one of the few religious establishments which remained open throughout the entire Soviet era. Known locally as Holy Dormition Pskovo-Pechersky Monastery, it is located 50 kilometers from Pskov in Pechory, Russia.

Although the monastery owes its founding to the discovery of the Pskov caves in a nearby mountain in 1392, a settlement was not established here until 1472 when an Orthodox priest named Jonah built Assumption Cathedral on site. Other chapels were added over time, and today Pskov-Caves Monastery displays colorful, eclectic architecture, a necropolis and holy icons which serve as reminders of the monastery’s historic significance and present spiritual life.

Pskov-Caves Monastery helped to defend the inhabitants of Pechory during the invasions of Stefan Batory in 1581 and the Swedish King Charles XII in 1703. It continued to guard the western border of Russia throughout the Great Northern War with Sweden, during which time the monks hid locals inside the monastery, helped to restore damaged homes and even redeemed prisoners of war. The signing of the Nystad Peace Treaty between Russia and Sweden in 1721 brought an end to two decades of war and officially established the Russian Empire as a territorial entity. Yet even in times of peace, the community services and spiritual leadership provided by the monks at Pskov-Caves Monastery did not abate. Due to the fact that the monastery was located in the Estonian SSR during Soviet rule, Pskov-Caves Monastery was one of the few religious institutions to remain open throughout the entire 20th century.

The architectural ensemble of Pskov-Caves Monastery formed gradually over the years. Within its two-meter-wide walls which stretch for 726 meters, 9 of its 10 towers and many exquisite churches have been perfectly preserved, including Assumption Cave Cathderal, Sretensky Church, Pokrovsky Church, Church of St. Lazarus, Church of St. Nicholas, Annunciation Church, Church of the Resurrection of Christ and St. Michael's Cathedral.

Built in 1541, Annunciation Church was the first stone structure of the complex which today shares a single building with Sretensky Church. Construction was feverishly carried out during the reign of Ivan the Terrible and today is noted for its glazed belt of ceramic slabs inscribed with ancient writings. In later years, the cathedral’s defensive structures were added and Annunciation Church was connected to Church of St. Nicholas via a special passageway.

St. Michael's Cathedral was built in 1820 in memory of the heroes who liberated Polotsk (present-day Belarus) from Napoleon’s army. The largest building of the complex, it complements the majestic 16th-century Church of St. Nicholas and belfry, both of which are striking in their beauty.

Toward the end of the 18th century, the single-domed Church of St. Lazarus was built. Originally intended as a hospital, it also functioned at various times as a candle factory, monks’ quarters and a guest house for pilgrims.

Two towers erected above a stream which supplied the fortress with water were equipped with underground passages at their base that could easily be covered with iron bars in the event of an enemy attack. Cannon holes built into the upper tiers of the towers could be used by the military garrison which was permanently stationed inside the fortress.

Miraculous Icon of the Assumption of the Mother of God, discovered in one of the caves in 1472, continues to attract religious pilgrims to Holy Dormition Pskovo-Pechersky Monastery. The icon is credited with the miraculous deliverance of the local army from Polish King Stefan Batory in the 16th century and the healing of a blind patron during the consecration of Assumption Cathedral. Today, the monastery also includes the venerated Pskov-Caves Tenderness Icon of the Mother of God and an image of St. Nicholas of Velikoretsk, both of which are located in Assumption Cave Cathedral.

When in Russia’s Pskov Region, a visit to the serene complex of Pskov-Caves Monastery promises tangible history, engaging architecture and a deeper appreciation for the meaning of life.