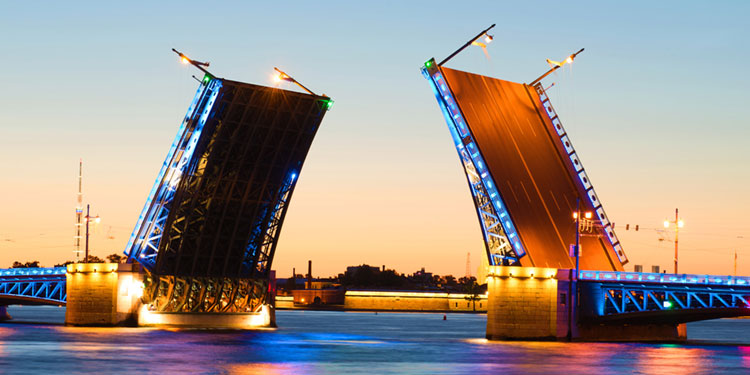 White nights in Saint Petersburg cast their enchanting spell on the city each year from May to July. At its peak, the sun shines for almost 19 hours and, when the sun finally sets at around midnight, the city is bathed in a rosy pink dusk. For the whole of June, night seems to disappear completely. In these endless days, time loses all meaning and the fur coats and grim expressions which usually shroud petersburgers are lifted to reveal radiant smiles. Even Dostoevsky (who penned infamously gruesome novels) was touched by the magic and wrote what was possibly his only sentimental book — White Nights.

What are the White Nights?

The White Nights are a period from May to July when the sun does not drop lower than 6 degrees below the horizon, resulting in a mesmerising glow all night long.

When is the White Nights Festival?

What are the White Nights and why are they so special?

For three months in summer, the most northerly parts of Canada, Sweden, Norway, Iceland, Finland, Greenland, Russia and Alaska experience no true nights. In regions above the Arctic Circle (like Yakutia, Russia) the sun never touches the horizon. Instead, it simply swirls through the sky in a dizzying, infinite loop. Saint Petersburg, being slightly lower than the Arctic Circle, does have sunsets in summer. Once set, however, the sun never drops lower than 6 degrees below the horizon— meaning that its rays continue to light up the sky. Scientifically, this phenomenon is called “midnight twilight”. Locals simply call them the White Nights. White nights can be experienced in other parts of the Northern hemisphere too, but what makes Saint Petersburg special is that it is the only city in the world with a population of more than 1 million high enough to see the white nights.

What to do and see during the White Nights in Saint Petersburg?

Since Peter the Great founded the city, the white nights have been a defining feature of Saint Petersburg. When they are at their brightest, from the 12th of June to the 2nd of July, the White Nights Festival fills the city’s streets with sweet melodies and breath-taking performances. Though it was only started in 1993, it has become the main event of Saint Petersburg’s summer calendar. Almost every single theatre and cultural institution in Saint Petersburg is involved. The Mariinsky theatre sets the tone for the event with its prestigious programme comprising of ballet, opera and classical music that is remastered each year.

It is said that imitation is the greatest form of flattery. That the white nights fever has spread to other European countries, resulting in wonderful recreations like Notte Bianco and Nuits blanches, is telling.

1. Watch Ballet in the Open-Air

For a chance to see Saint Petersburg’s prima-ballerinas, like Ulyana Lopatkina and Diana Vishneva, pirouette under a sky as dreamy as their tutus, book tickets to the Mariinsky II Theatre. It is the focal point of the Stars of the White Nights; a programme consisting of 160 classical performances, many of which are conducted outside. The festival is considered to be one of the top 10 classical music events in the world, making it a must-see for ballet and opera lovers. As with any festival of such prestige, booking months in advance is essential.

2. See the Bridges Open Up

In most cities, bridges are simply a means to an end. In Saint Petersburg, its 342 ornate bridges are an ends in themselves. They are famous the world over for their stunning designs, 18th-century statues and spectacular opening ceremonies in summer. Starting at around midnight, the city’s bridges break into two to the sound of classical music playing from speakers. Onlookers arrive an hour in advance to secure a prime spot on the embankment from which to watch the spectacle, while those ready to pay for the perfect view sail down in river barges as the bridges open up one-by-one above their heads.

When Catherine the Great declared that no architect dare build anything higher than her royal residence, the Hermitage, it is doubtful that she thought about the tremendous views her order would result in. Either way, visitors to the city during the White Nights can be grateful to her highness for the jaw-dropping views her arrogance created. The soft light at night creates the perfect conditions to admire the cityscape from above. With not a single skyscraper to disrupt the skyline, almost all of Saint Petersburg’s sights can be seen from any 5-story building. There isn’t a more romantic way to see the city than in the hush of twilight on a palace roof or cathedral’s dome. Like a scene from Titanic, you’ll want to scream “I’m the king of the world!”.

4. Dance in the Courtyards

What were once desolate and dirty courtyards in winter are transformed into party hubs during summer. Creative types takeover crumbling courtyards and reimagine them into beaches with barbecues, outdoor dance floors and cinemas. Saint Petersburg has always been known as Russia’s most cultured city and, in courtyards like Pushkinskaya 10, the Berthold Centre and New Holland, the casual visitor can boogie and share drinks with the poets, artists and dancers that this city is famous for.

Fairytales do come true in Saint Petersburg. On the graduation night of the city’s high school students, one of Russia’s most romantic tales, Scarlet Sails, is brought to life. Written by Alexander Grin, it tells the story of a sweet girl named Assol who believes that her true-love will come to her on a ship with magnificent red sails. In Saint Petersburg, just like in the story, Assol’s dream comes true. Since the end of WW2, school-leavers have sailed down the city’s canals on the most handsome ship imaginable with fluttering scarlet sails. Almost a million students and spectators come to experience the magic of Grin’s fairytale set to the sound of live orchestras and fireworks. Scarlet Sails is the pinnacle of the White Nights festivities, hence early bookings on boats or river-side cafes to ensure good views is vital.

6. Swing Away in a Castle

While Saint Petersburg may be known best for its ballet, it’s jazz that petersburgers go out for on a Saturday night. Its poetic notes and spontaneous jams suit this city of poets and dreamers like blue eyes suited Sinatra. Throughout the year, creativity buzzes and hums in intimate clubs; building up heat till eventually, for 3 days in summer, it all bursts out onto the streets. The White Night Swing jazz festival turns Saint Petersburg’s regal castles and squares into outdoor jazz clubs where both Russian and international bands jam their hearts out. Whether you come in time for the festival or not, tap shoes are a must-have when visiting Russia’s jazz capital.

The tsars built countless country escapes in Saint Petersburg’s suburbs. During the white nights, when the gardens are in full bloom, hundreds of actors in period costume turn the hands of time back two hundred years to the extravaganza of Elizabeth the Great’s reign. Hooves clatter along the park’s alleyways once more, courtiers duel and whole stages are set up on the lawns; only this time to entertain normal citizens and not the royal entourage. Out of all the historical recreations, the carnival at Alexandria Park in Peterhof is said to be the most impressive. Demand is high, and it is only held for two fleeting days at the beginning of July.

8. Gallop through the City in a Mega-Marathon

It isn’t only the weather that attracts athletes from all over the world to the White Nights marathon. The 42-kilometre trail is a top contender for the world’s most beautiful course. Starting in Palace Square, in front of the Hermitage, and then rounding past sites like St. Isaac’s Cathedral, the Russian Museum and St. Peter and Paul’s Fortress, this route takes runners past almost all of the city’s sites. But, if even the sight of a gilded dome isn’t enough to spur your legs on for 42 km, then you might want to consider the slightly less epic, but still stunning 10 km race.

Being the cultured city that it is, Saint Petersburg is home to an unbelievable amount of museums, galleries and exhibitions. Even born-and-bred petersburgers struggle to keep up with the assortment of cultural institutions. According to its curators, the Hermitage’s collection alone would take twenty-five years to see in its entirety! Thankfully, in the endless days of White Nights, museum admission isn’t limited to 9 - 5. For one whole magic night in May, practically all of Saint Petersburg’s museums don’t sleep. The queues are rather long, but the chance to see some of the world’s most magnificent works in a new light— that of mellow twilight— makes the wait worth it.

10. See the Stars on Palace Square

It isn’t just mere mortals who feel the magnetic draw of the White Nights pull them to Saint Petersburg. Countless celebrities have used the excuse of a concert to come and experience the surreal sky at midnight. International hits like the Rolling Stones and Paul McCartney along with Russia’s most well-loved pop artists have played right in front of the Hermitage, on the massive Palace Square, as part of the White Nights Festival.