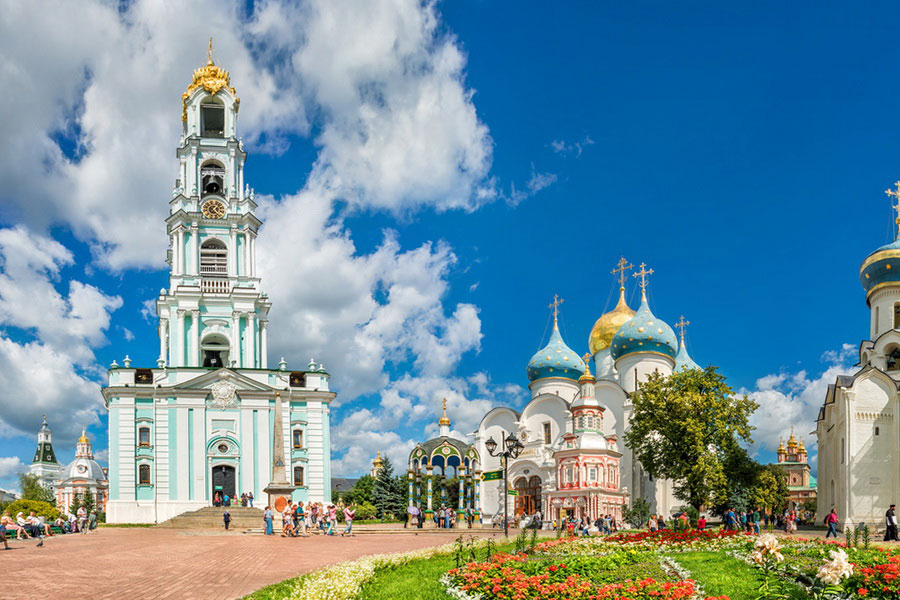 Lavra is the largest monastery in Russia. Now it is the home for 300 priests. It is considered the symbol of Russian Orthodoxy. The present monastery complex includes 45 buildings and monuments. They were created during the 15th – 19th centuries and represent different periods and styles of ancient architecture. The central part of this complex is the Trinity Cathedral with golden domes. It was built in 1422 in place of a wooden church of the same name and became the burial place of St. Sergius of Radonezh. The Trinity Cathedral is the masterpiece of Russian architecture of the 15th century. Around it the current appearance of the monastery started to shape. The iconostasis of the cathedral was created by the famous Russian icon painters Andrei Rublev and Daniil Chyorny; for the iconostasis Rublev painted the icon of the Holy Trinity, which is now in the Tretyakov Gallery. By the way, the iconostasis of the cathedral of the 40 icons is fully preserved. But the wonderful frescoes of the cathedral were replaced by new ones in the 17th century. The main relic of the monastery, the remains of St. Sergius of Radonezh are found in the southeastern part of the cathedral.

The second oldest building of the monastery is the Holy Dukhovskaya Church. It was also built of white stone and crowned with the small elegant bell tower, which is finished with the blue dome. Nearby, there is Nadkladeznaya chapel built in the style of Naryshkin (late 17th century).

The largest building of the monastery is the Assumption Cathedral. The cathedral was built in 1559 by the orders of Ivan the Terrible to celebrate the annexation of Kazan and Astrakhan Khanates to Russian lands. This majestic cathedral is very similar to the Assumption Cathedral of Moscow Kremlin. Its white stone facades harmoniously contrast with the four bright-blue domes, which sparkle with golden stars. The fifth dome of the Assumption Cathedral is gold-plated. Adjacent from the northwest, is a small tent Godunov burial vault. There are the remains of the Tsar Boris, his wife Mary, the son Fyodor and his daughter Xenia.

The tallest building of the Lavra is the Bell Tower (1741-1769) standing about 88 m tall with the cross. However, it is not only very high but also extraordinarily beautiful. It was built in Baroque style and has a multi-level structure. The building is crowned with an unusual cover the form of a conch. The bell tower is richly decorated with moldings, cornices, arches and other elements of decor.

In addition, the territory of the monastery has many other remarkable buildings. For example, the church of Solovetsky Zosima and Savvaty. The gateway church of St. John the Baptist (17th century). Initially five-domed, it now adorns the monastery with its single surviving dome. The Church of St. Sergius of Radonezh (1686-1692) is in the southern part of the Lavra.

A number of beautiful structures were erected in the monastery in the 18th century such as a small Mikheyevskaya church next to the refectory, the octagonal baroque Smolenskaya Church (Church of the Virgin Hodigitria with four broad stone stairs located on the perimeter and beautiful stone balustrades), the three-story Metropolitan house (16th – 17th centuries completely rebuilt in 1778).