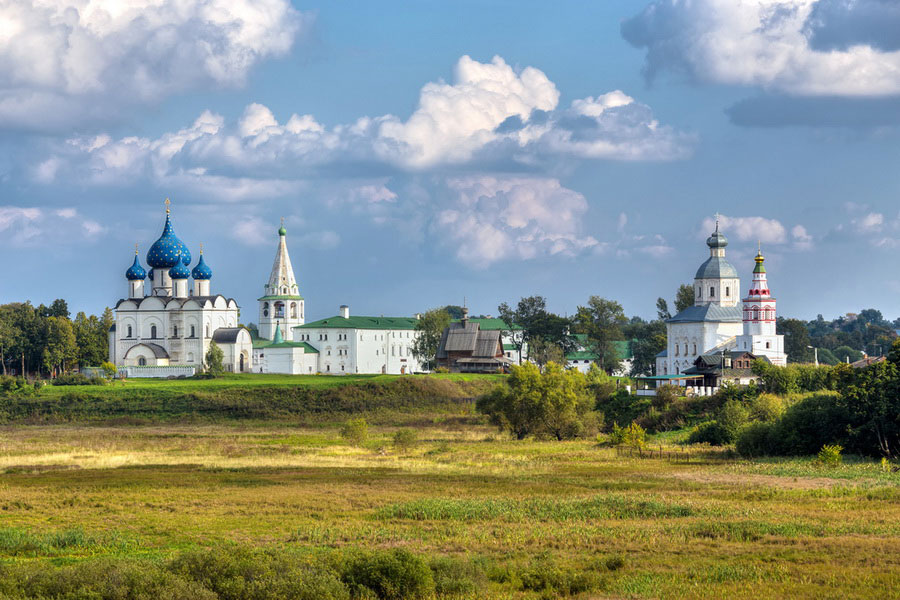 The ancient Kremlin of Suzdal is the place that gave rise to the city. The central street of the city leads there. Even from afar you can see its white-stone walls with bright-green roofs of the buildings. Bright white in the backdrop of the green meadows are the slender silhouettes of churches and the golden domes of ancient monasteries.

But the main building in the Kremlin is the Nativity Cathedral, which stands right in the middle. It was originally built in the 12th century under Vladimir Monomakh. The Cathedral became the first Christian church in Suzdal. Its glory spread all over Russia. Majestic and solemn, it was decorated by the best Byzantine masters. But the weak foundation could not bear such a massive building. In the next century it was completely rebuilt from scratch. In 1445, as a result of the Tatar invasions the temple was again destroyed. For more than 80 years the cathedral was in ruins. Finally, in the 16th century the current version of the cathedral was built - white-stone facades and the powerful five-domed drum with narrow windows. The walls of the cathedral still have the ancient frescoes of the 13th century and later ones along with the five-tier iconostasis of the 17th century. The interior of the cathedral is also famous for its golden gate (1230-1233). The gates were installed in the western and southern portals of the cathedral. The doors are divided into squares, each of which having a picture-story dedicated to the life of Christ. All images were made in a distinctive technique of gold on black finished brass. From the outside the walls of the cathedral are decorated with carved portals, decorative columns and carved stone.

The bell tower of the Nativity Cathedral deserves special attention of tourists. It was built in 1635. The octahedral tower is very tall. Its upper part, with the bells, is decorated with arched openings. On top of it is the tent peaked dome. The bell tower clock received a special clock - it not only chimed every hour but also every minute.

Besides, in the Kremlin, you will see the Bishop house (15th – 18th). There lived the spiritual leadership of the city. The houses are lined up similar to the Patriarch's Palace of the Kremlin. The most ancient building there is the Episcopal House of the late 15th century. There are the residential buildings, offices, refectory and the home church. Most of the houses were restored to their original form. Now the beautiful collection of Vladimir-Suzdal Museum of History and Art is located there.

The unique chance to see the masterpieces of Russian wooden architecture is to have a look at the wooden church of St. Nicholas. Church of St. Nicholas was transported there from the village of Glotovo in the 19th century. This wooden structure looks like a common Russian log hut. At present, the Kremlin houses the exhibition of Vladimir-Suzdal Museum-Reserve.