Church of St. Dmitry on the Blood 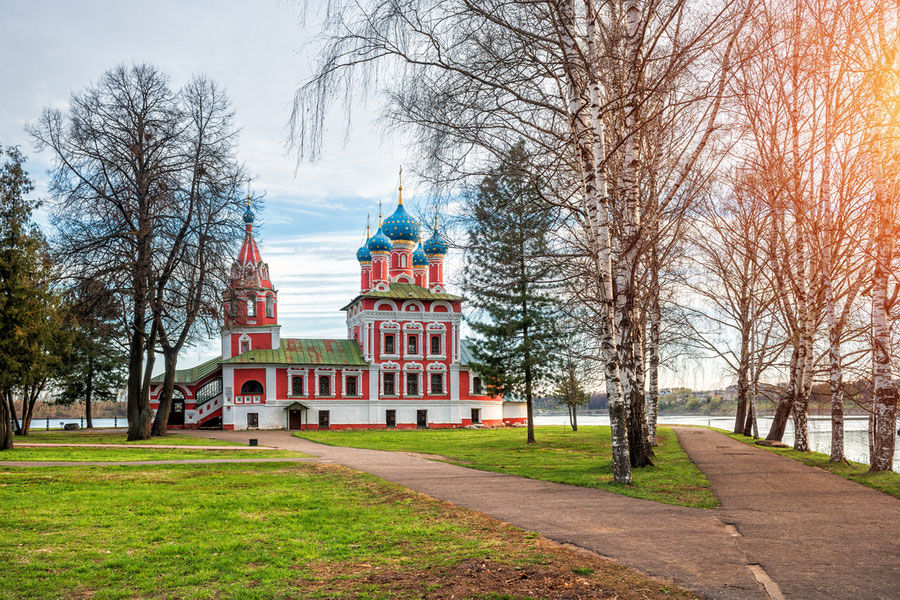 On May 15, 1591 young tsarevich Dmitry, the last heir of Ivan the Terrible died in mysterious circumstances. The chronicles of the Time of Troubles full of gloomy stories about the death of the tsarevich, but the real causes of death of the last Rurik has never been found out. However, the most popular version was a cold-blooded murder, allegedly plotted by Boris Godunov, the pretender to the throne. This version was so well known and argued, that later on it provided the basis for the famous historical play “Boris Godunov” by Alexander Pushkin.

The Church of St. Dmitry on the Blood stands on a steep bank of the Volga, but initially at the same location there was a wooden chapel built in memory of the tsarevich. Later on, in 1603, the chapel was replaced by a wooden church, and only in 1692 a church of stone was erected in lieu of that wooden one.

The templar part of the church has preserved ancient wall painting depicting the death of tsarevich Dmitry and a massacre of the crowd over the alleged killers. Stylistically, it looks like a monumental Yaroslavl and Kostroma painting of the XVII century, but is much inferior to it in grace and colors. The wall painting in the refectory was done later, in 1788, by Pyotr Khlebnikov. In a realistic manner, he depicted scenes of the traditional Biblical legend from the Old Testament "On the Creation of the World and the Fall of Adam and Eve”.

Decorated with wrought metal plates, the refectory ancient painted door, extant from the time when the church was built is also of great interest in the interior design of the temple. In addition, the temple displays an infamous “exiled” bell - the very bell whose toll shook the world at the day of tsarevich death. The bell tongue was drawn and the bell itself was sent into exile, and only after a long time it was returned to Uglich.

Today the Church of St. Dmitry on the Blood belongs to the local museum, the admission to it is paid.