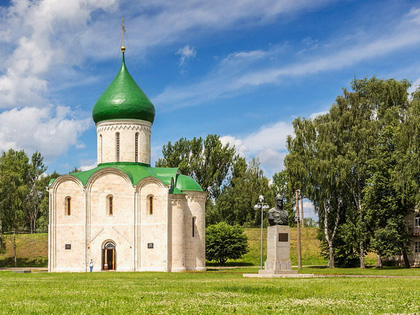 Discover the history and culture of Russia’s legendary “Golden Ring” from Moscow and Rostov Veliky, with excursions to other Golden Ring cities, Borisoglebsk, and the quaint small towns of Myshkin and Uglich. 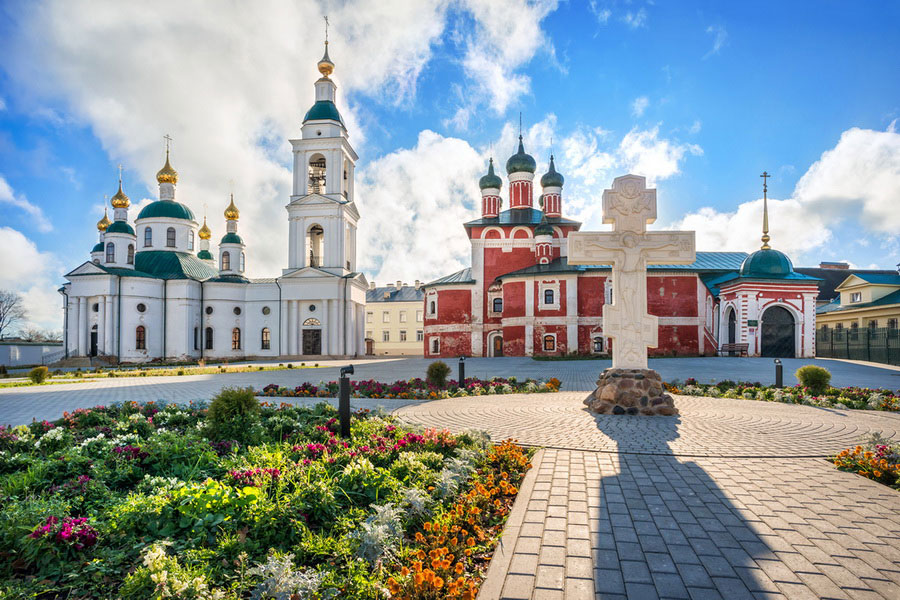 Fedorovsky and Smolensky churches in the Epiphany monastery, Uglich

Tours, Attractions and Things To Do in Uglich

Idyllic picturesque Uglich is situated on the bank of the Volga - the central waterway of Russia and one of the world’s largest rivers. Though Uglich is a little bit away from the traditional excursion chain - Sergiev Posad-Pereslavl-Rostov-Yaroslavl-Kostroma-Ivanovo-Suzdal-Vladimir, it is always included in the guided tours of the Golden Ring of Russia. It is because Uglich has preserved many unique monuments of Russian antiquity up to date. The first thing, that many tourists, who take a tour by the Golden Ring, see is Uglich, which strikes them with a combination of beauty of Volga landscape and old-time buildings, as though leaped from Kustodiev paintings.

Uglich is interesting for its history. The city is two-faced: houses with attics, quiet old streets and picturesque landscapes coexist with terrible rumors on accidental or planned death of Prince Dmitry, a son of Ivan the Terrible, which initiated the Time of Troubles and changed the destiny of Uglich once and forever. The city witnessed many dramatic events expressed nowadays in the encoded architectural monuments, city’s coat of arms – unusual and mysterious to laymen, as well as dark legends that like invisible mist clubs shroud Uglich.

The city under the name of Ugliche-Polebyl was first recorded in chronicles of 1148. There exist two versions about the origin of the city name. The first one says that Uglich received this name because of its location just at the point where the Volga River makes a bend called in the old days “ugilets” or “uglich”. The second version is simpler: in ancient times the site of Uglich city was used to burn coal (ugol in Russian), and this particular kind of fossil fuels gave the city such an unusual name. The city’s founder is supposed to be a relative of Princess Olga - Jan Pleskovitich and traditional date of foundation of Uglich is believed to be the year 937. Uglich, like many other cities of the Russian land, was destroyed many times: it was burned by the Mongol-Tatars, Lithuanians, and even the Prince of Tver.

Much has happened to Uglich, but the main event, which overturned the city's history, occurred on 15 May, 1591. On that very day, in mysterious circumstances, Prince Dmitry, an eight-year-old son of Ivan the Terrible, deceased at the time, was found dead in the garden. The witnesses, who were near Dmitry at this tragic moment, claimed that the prince playing with a knife suffered from a cerebral seizure and self-inflicted a mortal wound. But his inconsolable mother was certain that her son became a victim of a cold-blooded murder. The news of the death of Dmitry caused an unprecedented response among the people: the clamor of bells gathered a crowd who, literally torn to piece the alleged killers of the young prince. Since then, the speculation about what really had happened did not stop: thus one of the most popular versions, described in the “History of the Russian State”, says that the prince was killed by Boris Godunov’s order.

After Dmitry’s death, the city plunged into the Time of Troubles, was destroyed and looted. The death of the canonized prince had a considerable impact on the city: Dmitry clutching a knife in his hand is depicted on the blood-red background of Uglich emblem and flag, while the city's main attractions are the Church of St. Dmitry on the Blood and the Chambers, where the prince used to live in. Uglich and mysterious story of the death of Dmitry - the last of the Ruriks - inspired the famous Russian poet Alexander Pushkin to write “Boris Godunov”, which became a classic of Russian literature.

However, today Uglich is famous not only for chilling stories of antiquity. It has preserved architectural environment of the late XVIII - early XIX centuries, and even the Soviet-era constructions of the Uglich reservoir and hydroelectric complex harmoniously blended into the urban landscape without disturbing its integrity and historic charm. The rich historical, architectural and natural heritage of Uglich attracts travelers: every year the city receives more than 300,000 visitors. The regular festivals, such as “Winter Funs in Uglich”, “Uglich – a face of Russian province”, “Uglich versta” contribute to the development of tourism festival here. Uglich is also a popular place of pilgrimage (23 churches and 3monasteries) and sports tourism.

Modern Uglich welcomes the traveler with the Kremlin reflected in water, monasteries and churches , merchant and noble mansions , houses with carved architraves, museums with funny exhibits quiet atmosphere of a provincial town, which keeps its mysteries and enigma behind the cozy facade.