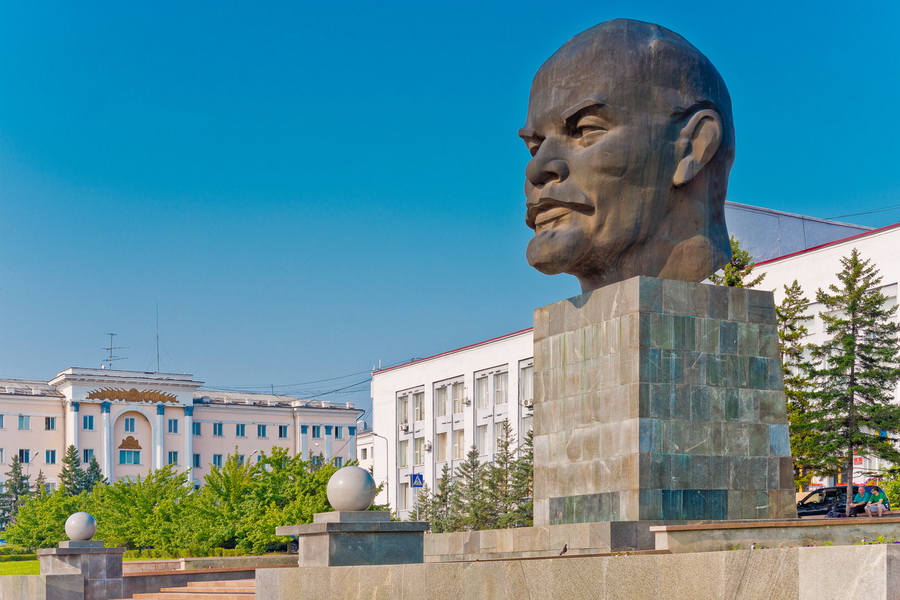 In terms of attractions Ulan-Ude is a pretty interesting place. This city has rich historical and cultural heritage, and in 1990 due to its uniqueness and significance, Ulan-Ude was included in the list of Russian historical cities. The city has 234 sites of cultural heritage including 11 of federal, and the remaining 223 of republican subordination, located in its territory.

The most picturesque part of Ulan-Ude is its historical center, mainly consisting of so-called “pieces of wood”, i.e. wooden houses. There are so many of them that they illustrate the city’s history of the last century. Walking through the historic center, you can meet both miniature houses with carved architraves, as though having gone from the illustrations of Russian folk tales, and the sturdy wooden house of the turn of the century. The streets of the historic center called the “wooden ones”. The most amazing thing is that these architectural and historical monuments are still inhabited by people. However, they live without much comfort: the wooden houses are almost spare of amenities while they themselves are about to fall apart, while a plan for total reconstruction of the city’s historical center, though developed with a long-term outlook, is not in haste to be implemented. Yet the lovers of true “not sleek” history of Russian cities should hurry up - if no one undertakes the salvation of the Ulan-Ude wooden historic center - in the foreseeable future, it will simply cease to exist.

Square of the Soviets

If you move away from the historic center and proceed to the center of the modern city (Ulan-Ude, despite all its quirks, is really a modern city: for example, it is one of the few cities in Russia with 4D cinema), you can see an amazing monument, which the residents themselves proudly consider the main attraction of Ulan-Ude. We are talking about a monument to Vladimir Lenin, installed on the Square of the Soviets in front of the town hall building. This monument is a leader’s head, cast in bronze, mounted on a granite pedestal, and the largest one in the world (12 tons in weight, 13.5 meters in height), and entered to the Guinness Book of Records due to this fact. Today, the legendary monument attracts young people who gather there to communicate, ride bikes and skateboards.

Next to the monument to Lenin, stands a People’s Khural building, the residence of the Buryatian President. While behind the enormous head of the leader, there is a building of the House of the Soviets with main ministries of the RB Government and city administration offices. Sightseeing of these numerous government buildings is, undoubtedly, an important part of the tour of Ulan-Ude, but not the most interesting one.

Opposite to the monument to V.I. Lenin there is an unusual three-storey stone building - an architectural and historical monument dating back to the XIX century. Formerly, the building was owned by the merchant S. Rosenstein, in 1904 it was used to house the Institute of Oriental Languages moved there from Vladivostok. Although the building was closed at the time of the first Russian revolution of 1905, in 1924, the life began hamming there again, first with moving of the Buryat-Mongolian Pedagogical School, then the Buryat State University there.

Next attraction is the Buryat State Academic Opera and Ballet Theatre, one of the most beautiful buildings in the whole Russian East. The point is that the architecture of this building, owing to the efforts of A. Fedorov, the chief architect of the Moscow Institute of Theatrical Projects, harmonies European and Asian traditions, like yin and yang. A widespread myth has it that the theater was built by prisoners of war - the Japanese Kwantung Army soldiers (as many tour guides tell), but it is not true. In fact, the Japanese captives only cleared the building site and participated in the construction of the foundation.

Walk along the Arbat

Another grandiose attraction of Ulan-Ude is the Royal Arch Gate, built in 1891 in honor of Crown Prince Nicholas II, who was returning from Japan via Ulan-Ude. Under the communist regime the arch was demolished and reconstructed in 2000 with financial support of "Baikalfarm." After its renovation, the arch became higher. Next to it there nestles a wooden building of the XIX century to house the Verkhneudinsk telegraph post office.

From there you can walk down to the main and most beautiful street in Ulan-Ude – the Arbat, which the locals sometimes still keep calling Big Nicholas or Lenin Street. Previously, it used to be an elite residential area - home to the richest citizens. And now their luxury houses, standing on either side of the street, became a part of the Ulan-Ude sights, too. The guests of the Arbat are welcomed by a recognizable symbol of the street, as well as the city in general, the monument of “Cornucopia”, made after the fashion of the Ulan-Ude’s coat of arms.

In the Arbat, there is the House with Atlantes - one of the most beautiful buildings in the city, built in a big way in 1907 by the merchant Kappelman. A few steps from the House with Atlantes, stands the city’s Historical Museum, once used to be the home of the merchant, I.F. Goldobin, one of the friends of the Crown Prince Nicholas II. At this particular place there is the home of another influential citizen who once lived in Ulan-Ude - M. Kurbatov’s house, built in 1802 in classical style.

Sights in the vicinity of Ulan-Ude

Datsans, contrary to popular belief, are not temples, in fact. These monasteries most often include a Buddhistic university. The Russian Buddhists consider the Ivolginsky datsan, located 40 kilometers from Ulan-Ude, the most important and visited monastery. More...