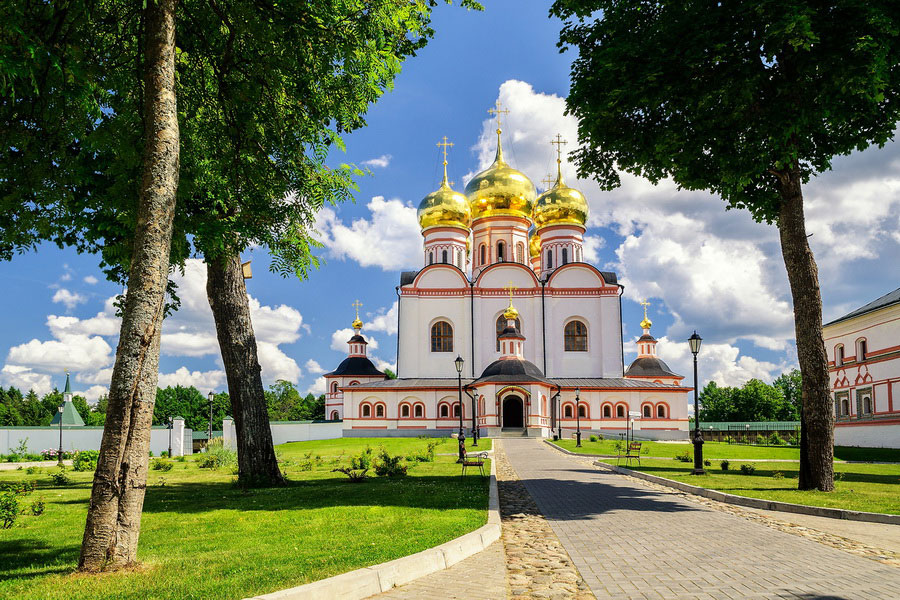 Valday Iversky Monastery, located on Selvitsky Island in Russia’s Valday Region, was once a provincial spiritual center famous for having one of the only typography and printing presses in the country. Today this enclave, located 10 kilometers from the city of Valday, offers soothing views and colorful, fanciful cathedrals.

Iversky Monastery was founded by the Patriarch of Moscow and Rus, Metropolitan Nikon. Upon entering the patriarchy in 1652, Nikon expressed a desire to build a hermitage similar to Iversky Monastery on Mount Athos. The project was approved by Tsar Alexei Mikhailovich, who allocated funds from the treasury for its completion.

The monastery’s site was selected after Nikon received a vision regarding the location. Construction began in the summer of 1653, and by autumn of that year two wooden churches had been completed. The winter cathedral was named after the Iveron Icon of the Mother of God in Mount Athos, and the summer church in honor of St. Philip of Moscow. The complex was built to reflect Athos architectural traditions and the main monastic robe created in the likeness of its Greek counterpart. A copy of the Iveron Icon of the Mother of God was also placed in the cathedral and highly revered by the community.

When Nikon visited the monastery in 1654, he changed the name of the village of Bogoroditsky to Selvitsky Island and christened Valday Lake as Holy Lake (Svyatoozersky). According to legend, Nikon even lowered a copy of the Gospels and a cross to the bottom of the lake after it had been reconsecrated.

Under the watchful eye of the Patriarch, stone churches were added to the complex. The new monastery was consecrated by Nikon himself, who in 1654 ordered holy relics be transferred here from Borovichi Monastery. A royal charter issued that same year incorporated the Holy Lake, its islands and other monasteries from Novgorod Region into the territory of Valday Iversky Monastery.

In 1655, when 70 monks from Belarus arrived at Valday Iverseky Monastery with all of their possessions and a printing press, the bookbinding and printing industry began rapidly developing at the complex. Among the new arrivals were the future Patriarch Joachim and the brother of Simeon of Polotsk, Isakiy of Polotsk.

The first stone building at Valday Iversky was Assumption Cathedral, which was completed in 1656 and has survived to this day. Renamed in 2008 in honor of the Iveron Icon of the Mother of God, the church stands out for its simple and aesthetically pleasing form.

By the early 18th century, the monastery had fallen into disrepair. From 1712-1730, it was placed under the jurisdiction of Alexander Nevsky Monastery, which was still under construction, and its large bell was moved to a monastery in St. Petersubrg.

In 1919, the monastery was transformed into a labor artel and its territory used for gardens and pastureland. In 1927, the Ministry of Agriculture and Food disbanded the artel after discovering that its members were strongly devoted to the Iveron icon. The monastic community was liquidated, and the miraculous icon taken to an undisclosed location, from where it was never recovered.

In the coming decades, Valday Iversky Monastery was turned into a museum before being converted into a home for disabled World War II veterans and a school for children suffering from tuberculosis. When a village was established on Selvitsky Island in the 1970s, the monastery was used as a recreation center.

Revival came in 1991 when the monastery was returned to the Diocese of Novgorod, albeit in a deplorable state. Over time, services resumed in Assumption Cathedral, and at the end of 2007, large-scale restoration efforts at the complex were completed. Today, a copy of the Iveron Icon of the Mother of God, made in the late 18th century by famed steelworkers from the city of Zlatoust and kept in Valday’s Peter and Paul Church for decades, now adorns Assumption Cathedral in place of the one which vanished in the 1920s.

The magnificent Valday Iversky Monastery is a beautiful architectural complex which continues to attract visitors from around the world.