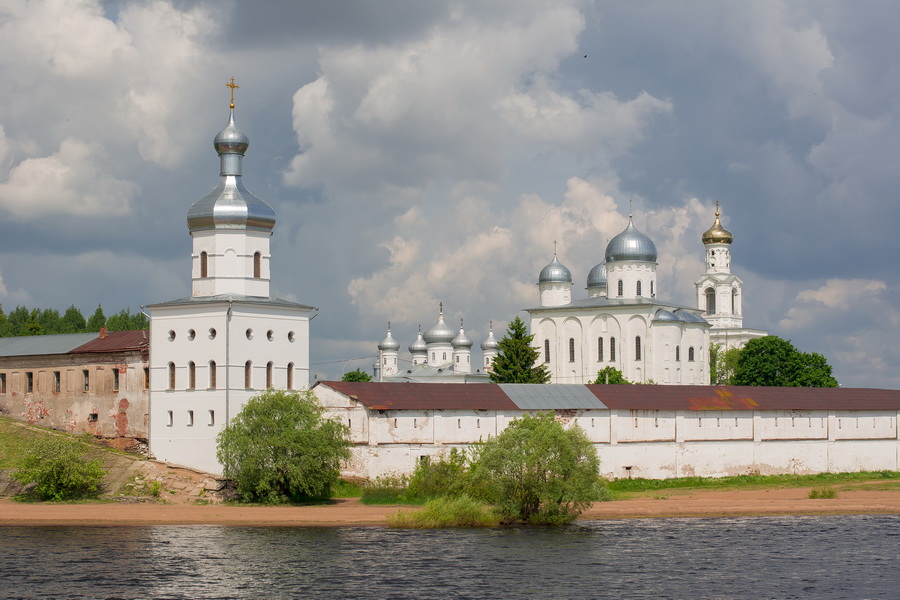 The picturesque Lake Ilmen stretches for kilometers in western Novgorod Region. More than 50 rivers and rivulets flow into the lake, but only one river, the Volkhov, flows out of it. Standing at its source just five kilometers outside of Veliky Novgorod is Yuriev Monastery, one of the oldest monasteries in Russia. The complex once served as the spiritual center of the Novgorod Republic and is now an active monastery in the Russian Orthodox Church.

The first written reference to the hermitage was in 1119. It was purportedly founded in 1030 by Prince Yaroslav the Wise, who ordered a church and monastery be built on the southern outskirts of Veliky Novgorod in honor of his patron saint, George the Victorious. Yaroslavl was christened with the name George (“Yuri” in Russian) which led to the current name of the monastery.

The original St. George's Church was made of wood but was replaced with a stone cathedral by Grand Duke Mstislav I almost a century later. A Russian architect was tasked with its construction, while Mstislav's son Prince Vsevolod and an abbot named Kiriaku oversaw the work. The monastery’s construction is mentioned in chronicles dated to 1333.

After inheriting the throne of Kiev in 1125, Mstislav became engaged to the daughter of the governor of Novgorod. He began amassing large plots of land and proceeded to donate prime property to Yuriev Monastery. A letter written on behalf of Prince Mstislav and his son confirming this fact is now kept in a museum in Novgorod and is the oldest known Russian legal document from this period. During restoration work at the monastery in the early 1990s, writing was discovered on its walls which indicate that Prince Mstislav visited Yuriev Monastery on his name day.

In time, the monastery became a state entity headed by Archimandrite Photius, the second-highest clergyman in the land of Novgorod. He had become the richest church feudal lord by the end of the 18th century, yet during the abolition of the monastic feudal system under Catherine II he lost most of these lands.

In the early 19th century Archimandrite Photius, who enjoyed the favor of both Alexander I and wealthy landowner Countess Anna Alekseevna Orlova-Chesmenskaya, attracted influential new benefactors to the monastery. This led to large-scale construction efforts, and before long Spassky Cathedral, a bell tower, Church of All Saints, monks’ quarters, Holy Cross Cathedral and more had been added to the complex.

In 1921, after the Soviets’ rise to power, all of the property and valuables at Yuriev Monastery were confiscated. Six of the churches remained active for a few years, but in 1928 church services were limited only to Holy Cross Cathedral. In the early 1930s, services were held in the Archimandrite Building for a short time, but soon thereafter the monastery was plundered and closed. In 1932, it was converted into a home for the disabled.

During World War II, Yuriev Monastery suffered serious damage after being captured by enemy forces. Its buildings were soon converted into a post office, educational institute, museum, grocery store and art salon, which they remained until 1990. In 1991, the site was returned to the Russian Orthodox Church and services were resumed. The monastery reopened in 1995, and in 2005 a theological school was also founded here.

The oldest and most striking structure is St. George's Cathedral, which in Veliky Novgorod is second in size only to St. Sofia Cathedral. Its three asymmetrically-arranged domes give it a very unusual appearance. In the drum of one of the domes is a small additional church where 12th and 19th-century frescoes can still be seen. The cathedral doubled as a tomb for the monastery’s archimandrites and for Novgorod governors, Russian princes and their family members. It was repeatedly renovated, and in the 19th century its original appearance was distorted after a chapel, vestry room and porch were added. During restoration efforts in the 1930s, however, these additions were removed and St. George’s Cathedral was restored to its former grandeur.

At the corner of the northern and eastern walls of Yuriev Monastery stands the five-domed Holy Cross Cathedral. Over 200 8-pointed golden stars which are prominently scattered across its blue domes were a part of the original design. Unfortunately the interior paintings of Holy Cross Cathedral were completely lost in Soviet times, and the cathedral walls are now painted white.

The monastery’s four-tiered, 52-meter-high bell tower was built in 1838-1841 by Carlo Rossi. It harmoniously blends with the architectural ensemble while also evoking surprise due to the sharp discrepancy between its wide second and narrow third tiers. Legend claims that Emperor Nicholas I himself removed the middle tier from the blueprint so that the bell tower would not exceed the height of Ivan the Great’s Kremlin Bell Tower in Moscow. In previous times, the bell tower was decorated with a clock and 17 bells which chimed on the hour.

Today, services are being held in four churches at Yuriev Monastery in Veliky Novgorod even as its damaged buildings continue to be repaired.