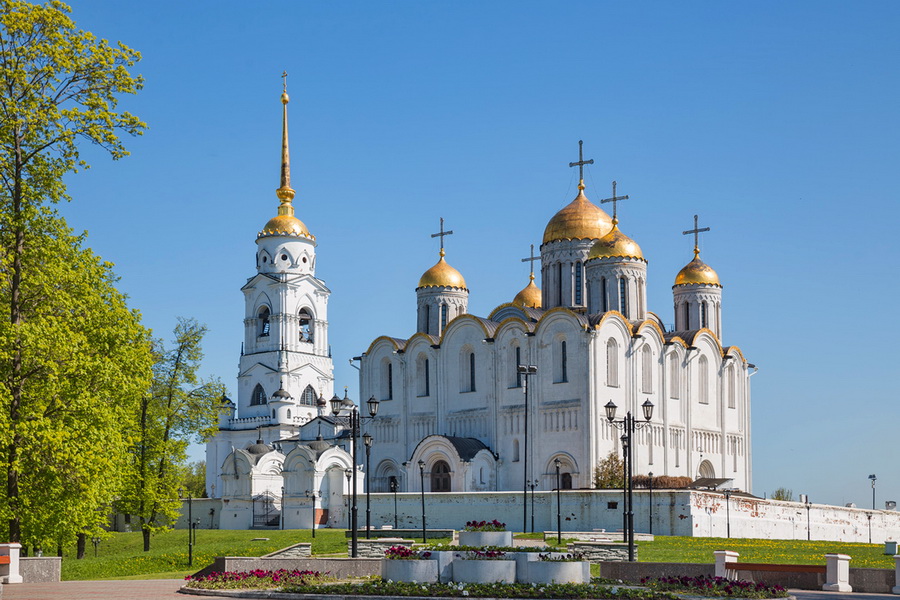 The main shrine of Vladimir is its majestic and beautiful Assumption Cathedral. Once it was the main church of Vladimir principality. Its construction was initiated by the glorious Prince Andrei Bogolyubskii in 1158. However, it looked somewhat different then: it had only one dome and could accommodate only two thousand people. Nevertheless, even in that form the cathedral became the prototype for the future Assumption Cathedral in Moscow. The cathedral was intended for important events: coronations of Vladimir princes, and blessings of soldiers going to battlefields.

Its new face the cathedral acquired after the fire of 1185, which had heavily damaged the interior of the church. The heir of Bogolubsky, the Prince Vsevolod the Big Nest, decided to improve the architecture of the cathedral. He surrounded the building by galleries, on the corners of which the new gilded domes appeared. As a result, the cathedral square become even bigger than before and its new look become even more beautiful, more solemn, and more elegant. However, the Assumption Cathedral was destined to suffer again and again. First came the invasion of Mongol hordes that set fire to the cathedral, where the princely family took refuge. The Cathedral was heavily burned but was not destroyed.

In 1408 the interior design of the cathedral was taken care by the well-known icon painter, Andrei Rublev and his friend Daniel Chyorny. But unfortunately, the magnificent frescoes have survived only partially: the fires and looting did their work; by the 18th century the cathedral had dilapidated and dreary appearance. Thanks to the restoration of 1888-1891 the Assumption Cathedral received its original look. Today the Assumption Cathedral stands on the top of a high hill and is the integral part of the city’s panorama. The tourists enter through the high tower, which is also a remarkable example of architecture.

The outside decoration of the cathedral is rather impressive - high portals with carved capitals of columns and richly carved stone arches highlight the front entrance to the cathedral. The drum of the central dome is decorated with 12 windows. Equally beautiful is the interior of the church: the floor is paved with mosaics; the walls are painted with beautiful murals. Relatively well preserved are Rublev’s frescoes related to the theme of the Doomsday. It used to the largest iconostasis in Russia in the 15th century.

Besides, Vladimir Assumption Cathedral is known for its icon of Vladimir Mother of God. This Byzantine icon, painted by Luke the Evangelist in the 12th century was donated to Yuri Dolgoruky by the Patriarch of Constantinople. The son of Yuri Dolgoruky, Prince Andrei Bogolyubskii brought it to Vladimir, the new capital of Russia. The icon was placed into the Assumption Cathedral. Vladimir Icon of the Mother of God is associated with numerous miracles. The icon was revered as the patroness of the Russian land. In 1408 the icon was moved to Moscow; now it is kept in the Tretyakov Gallery.

The cathedral is the burial place of St. Prince Alexander Bogolyubsky, his son Gleb as well as Georgy Vsevolodovich. The walls of the cathedral keep the tombs of a few Vladimir princes including another son of Bogolubsky, Izyaslav and local bishops.