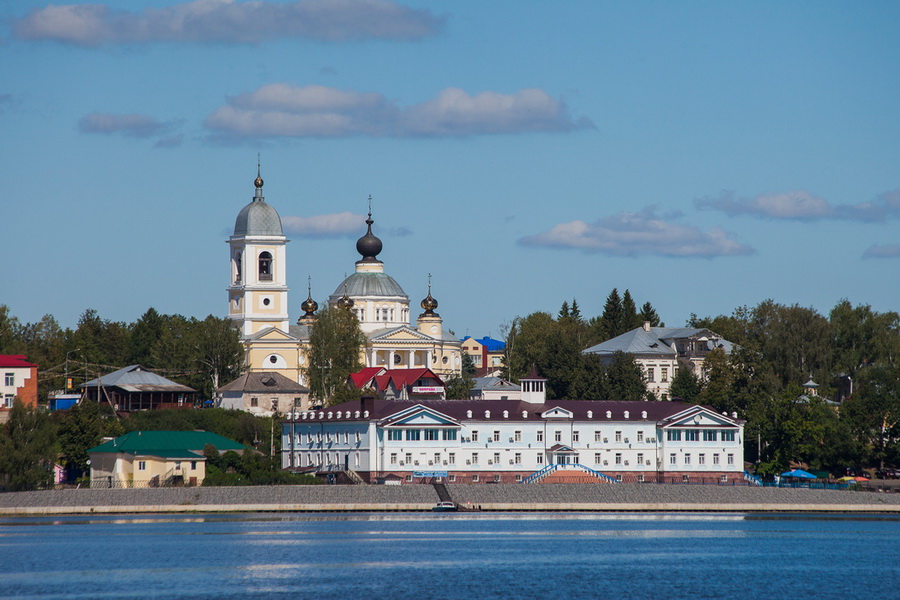 The first settlement appeared on the site of present-day Myshkin some five thousand years ago. The Slavs settled in the area in the 9th century and lived peacefully near the Finno-Ugric tribes which had inhabited the territory since the first millennium BC. The colongy grew and strengthened until 1238 when it was decimated by the Mongol ruler Batu Khan, only to reappear in historical annals in the 16th-17th centuries.

The name “Myshkin” is associated with the reign of the Mstislavsky princes into whose hands the village passed from the Yukhotsky princes. An urban legend claims that a small field mouse saved one of the Mstislav princes from certain death from a snake bite. In honor of this miraculous salvation, the prince built a chapel and a gatehouse which were likely the first buildings of the future city.

In the 17th century, Myshkin was still a village closely associated with Yaroslavl and Moscow Chudov Monastery. At that time the village had two churches, St. Nicholas Church and Boris and Gleb Church. As the monastery’s economy began to grow, so did the village, and in 1777 Myshkin acquired the status of a city with its own coat of arms.

As the city developed into a center of trade, educational institutions, a printing house and a library were built. Rapid cultural development occurred in the late 19th and early 20th centuries, as evidenced by the addition of museums, sports complexes, an art gallery and even a weather station.

Despite the pasing of time, Myshkin’s grateful citizens did not forget about the little mouse who saved the ancient prince from death. Traces of him can be found not only in the city’s name and its coat of arms, but also at the Mouse Museum, the only one of its kind in the world. The museum has the world’s largest collection of mice and a variety of exhibits which are regularly updated.

With its unusual museums and some of the most historic churches in Yaroslavl, Myshkin never fails to capture the imagination of visitors. With the growing popularity of cruise ships along the Volga River and an increased interest in ancient Russian cities, it has become a favorite destination for tourists. Apart from the famous Mouse Museum, be sure to visit the following when in Myshkin:

Myshkin’s Upper Boulevard offers rare panoramas of quaint villages, pine forest reserves and the Volga and Yukhoti Rivers. Yet the promenade also attracts with its own unique facade of antiquity. On Upper Boulevard, regarded as the most beautiful street in Myshkin, ornately decorated stone mansions coexist with wooden huts to recreate the atmosphere of a small merchant town. Not surprisingly, the boulevard is a favorite place for strolling among residents and visitors alike.

This memorial complex was opened on National Victory Day (May 8th) in 2005, the 60th anniversary of the Allied victory over Nazi troops in World War II. The 1,500 square meter memorial, built in only three months, includes an alley overlooking Volzhsky Boulevard and a serene plaza framed by walls of black and red granite.

In the center of the complex is a broze statue dedicated to fallen soldiers. In front of the sculpture, a bronze star is mounted on a pedestal while an eternal flame serves as a constant reminder of the sacrifices made for freedom. Before the memorial’s official opening, residents of Myshkin would visit Moscow to lay flowers at the Tomb of the Unknown Soldier at the Kremlin Wall. When creating their own monument, a spark of this sacred fire was ignited in their own city.

A granite wall with bronze bas-reliefs serves as a Book of Memory. On it the names and personal recollecations of Myshkin’s fallen soldiers are engraved in an emotional memorial. Trees planted on Victory Square are designed to symbolize tears for the fallen soldiers as well as strength and hope for the future.

Myshkin’s main square is located in the city center between Nikolskaya and Rybinskaya Streets, a section of town which was intensively built up in the classicist style in the early 19th century. All of these buildings would later be formed into a single architectural ensemble.

On August 15, 1805, the construction of Assumption Cathedral in Yaroslavl Region was begun in the neighborhood. Construction lasted until 1820, with the date of comletion engraved on a medallion on the southern wall of the church. The cathedral formed the backbone of the main city square and was primarily funded by two local merchants.

Assumption Cathedral was built by Yaroslavl masons and painted by a native of the village of Teykovo. In order to make the church appear as luxurious as possible while still being frugal, the artist used the grisaille technique in which a tonal gradation of color is used to imitate columns, cornices and stucco. Stories from the Bible are depcited in framed pictorials, while images of evangelists can be seen under the central dome. The altar is decorated with references to the Trinity, and Old Testament scenes are depicted on the walls and ceiling of the refectory.

In Assumption Cathedral, an inscription states that on August 11, 1866, the cathedral was visited by Tsarevich Alexander (the future Emperor Alexander III), to whom Archpriest John Nicholas presented an icon of his patron Saint Alexander Nevsky.

After the Russian Revolution of 1917, Assumption Cathedral suffered the fate of most churches and monasteries in Russia – after being looted, it was used for secular purposes for decades. It was returned to the Orthodox community only in 1992, at which time restoration work on it began.

St. Nicholas Cathedral is the oldest stone builing in the city. It was built in 1766, 11 years before Myshkin was granted city status.

The story of Alexander Petrovich Berezin, a merchant of the first guild and the city head of St. Petersburg, is closely connected with Nikolsky Cathedral. Berezin was born near Myshkin in the village of Yeremeytsevo to a poor peasant family. Circumstances led his father to place an icon of St. Nicholas in the Myshkin tavern. But Berezin bought back the icon more than a quarter of a century later. He was deeply impressed by the fact that his ancestral relic had been miraculously preserved and returned to his family. In memory of this event, Berezin built Nikolsky Cathedral, along with a church in St. Petersburg and Church of the Ascension in Kruglitsy.

In 1830 Nikolsky Cathedral was rebuilt and in 1860 the bell tower was reconstructed, only to be destroyed again some years later. In Soviet times the cathedral was repurposed as a House of Culture and was only restored as a church in 2003 - 2004. In 2010, in connection with the celebration of Yaroslavl’s 1000th birthday, Nikolsky Cathedral was visited by his Holiness Patriarch Kirill of Moscow and All Russia, who petitioned God for help in the restoration process and donated an icon of St. John of Kiev to the church.

Currently there are museum exhibits in the basement of Nikolsky Cathedral and in the house just opposite the church.

In the 19th century, the city of Myshkin was served by several mills. The largest of these was owned by the city’s wealthiest merchant, Timofey Chistov. His mill regularly churned out grain for the city and the Yaroslavl markets until the 1970s. The mill's mechanisms, all of which are still in working order, were initially powered by steam, then oil, and most recently by electricity.

When visiting the mill you can see each stage of the transformation of grain into flour and tour several interactive expositions, including "Barn Mice", "Merchants’ Shops" and "Tree of Life".

Not far from the embankment, several interesting museums line the main thoroughfare of Myshkin, most notably the Miller's House, Flax Museum and Museum of Russian Valenki (felt boots). The latter, located on an estate that once belonged to the merchant Chistov, is one of the most visited places in the city.

Russian Valenki Museum opened in 2000 after the Russian Valenki Fair was held in honor of Myshkin. The exhibition is separated into two halls in a pretty two-room wooden house with a covered porch and beautifully carved architraves.

In the first hall, hundreds of felt boots of varying colors and sizes are displayed, each of which reveals the diverse and talented embroidery employed to make each boot beautiful and unique. This hall also contains machines for hand felting and old felt boots from the 19th- 20th centuries, as well as photos of the production process.The second hall is dedicated to artwork created by using the felting technique, including toys, sculptures, panels, tapestries and the giant Tsar-Valenok boot.A special corner of the exhibition is dedicated to Myshkin’s city symbol, the mouse.

If you plan to visit Russian Valenki Museum, be sure to ask for a guide, who can supplement the displays with fascinating details and background information. You will also have the opporutnity to buy beautiful felt boots which will make great souvenirs, keep you warm in wintertime and, if rumor is true, protect you from many ailments.

A visit to Myshkin in Yaroslavl Region promises relaxation, natural beauty and a wealth of historic sites which invite you to step into the past to discover Russian history for yourself.