Cult of silk in China

There is a beautiful legend about the beginning of the art of silkworm breeding in China. According to it the wife of Great Yellow Emperor Shi Huang , Lei Zu, sat under the shady crone of mulberry enjoying her herbal tea. Suddenly, a silkworm cocoon fell in her fragrant beverage. The angry empress took the cocoon out from her bowl and found that it started to unwind and the thread was endless … In no time the beautiful Lei Zu reckoned that the thread could be used to make a wonderful yarn … Since then the empress has been called “the Silk Goddess”. On holidays in her honor the altars of temples are decorated by gifts of silkworm cocoons.

The history testifies that the first cocoons of silkworm and their surprising properties were discovered by Chinese almost five thousand years ago. During the excavations in different areas of China the cocoons of silkworm were found in the cultural layers dating the 3rd millennium BC. The discovered inscriptions on tortoise shells and bones contained the hieroglyphs designating the notions of “silkworm”, “mulberry”, “silk” and “silk fabric”. 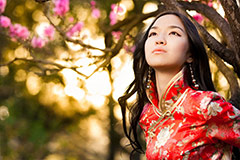 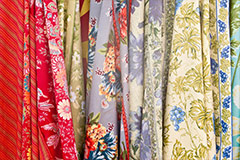 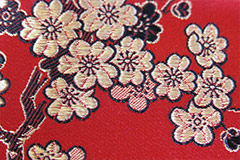 It is known that by the 5th century BC mulberry worms were bred in six provinces of the Celestial; the basic center of sericulture was Hangchow. In spring the empress opened the season of sericulture which lasted for six months; the work was done mainly by women.

First the rare fabric was worn only by the members of imperial family. In palace rooms the emperor, his wife and the heir were dressed in white silk clothes; during their solemn appearances they wore yellow. But with the silk manufacture expansion the precious clothes became accessible to the court and then to ordinary people as well.

The silk cult in China reached unprecedented heights. Old Chinese texts mention sacrifices to the God of silkworm, Jung-Jui, as well as sacred mulberry groves or separate mulberries as the places of special cult rituals.

Besides, the material was used for manufacturing of fishing lines, bowstrings, strings for musical instruments and paper. During the epoch of Han dynasty (3rd century BC – 3rd AD) silk became the universal equivalent in China: peasants used it for paying taxes, the state paid officials in silk.

In Warring States Period (475 - 221 BC) silk and silk products became accessible to the population masses. The technologies connected with sericulture, embroidery, fabric dyeing were widespread.

In Ancient China each province made its own kind of silk which was named in the honor of the province. However, the major advanced centers of sericulture in China were the lands lying along the Hwang Ho, the Chang Jiang and Sichuan province.

In the days of Han dynasty (the middle of the 2nd century BC) the silk production volume considerably increased; the brightness of dyes, the riches and perfection of embroidery were amazing. Soon the historical process of sericulture expansion to neighboring territories began. In the homes of the nobility there were workshops which copied the imperial ones. 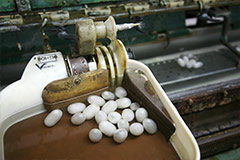 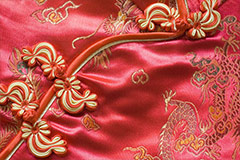 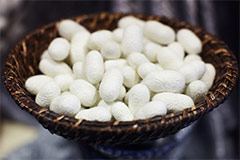 After the enthronement of Tang dynasty the palatial weaving workshops called “Weaving and Dyeing Department” were established. Initially the workshops produced ceremonial headdresses but later began to make multi-color silk fabrics. Specialized workshops were engaged in gathering of dyes: flowers, leaves, bark and roots of plants. In the end of the 6th – the beginning of the 7th century the main silk-weaving centers of China were situated on the territory of present day provinces of Henan, Hebei, Shandong and Sichuan.

Chinese silk from the period of Tang dynasty (618–907) was discovered on the territory of Xinjiang, in Turfan, in Tajikistan, and in the North Caucasus. The found fabrics prove that that was the time of active trade and Chinese silk in big volumes was taken out to Europe via the Silk Road.

For the first time silk crossed the border of China in the 2nd century BC when Chinese ambassador Zhang Qian opened the countries of Central Asia for China. Caravans loaded with valuable fabric went to the West and gave the ancient route its name - the Silk Road. Gradually silk trade extended to the neighboring countries: Korea and Japan, and later – to India and Persia. Silk was sent by ships and caravans going across mountains and deserts to Europe.

But despite the development of trade Chinese managed to keep the silk production in secret for centuries; any attempt to take out butterflies, caterpillars or eggs ended in death penalty.

There were numerous attempts to explain silk origin. Notable European grandees admiring the matte shine of wonderful fabric could not understand how it had been made. Vergil, the Roman poet, believed that silk was combed from leaves; Dionysus, the Greek historian, thought that it had been made from flowers.

Other Europeans believed that glittering soft threads “grow” on special trees or that silk was made by huge beetles. Other assumption was that silk was produced from the down of special birds. Ammianus Marcellinus, the Roman historian of the 4th century, declared: “Silk fabrics are made from soil! Chinese soil is soft as wool, - he asserted - After watering and special cultivation it can be used for silk threads formation!”