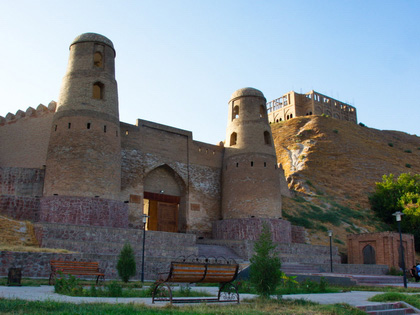 Learn more of the history and culture of 6-day tour in Tajikistan around the cities of Dushanbe, Istaravshan and Penjikent. You will also enjoy the beauty of the Pamir Mountains and Lake Iskanderkul on the way.

Hissar Fortress used to be a palace of one of Bukhara Emirate becks. The fortress with 1 m walls and loopholes for guns and cannons towered on a high hill's slope and was carefully guarded. Inside there was a pool and a garden. Across from the fortress there was a noisy market square with a caravanserai and a variety of shops.

Big staircases and brick-lined terraces led to the main entrance. Unfortunately they haven't survived. So hasn’t the entire palace building. The only remaining part is a monumental gate made from burned bricks with two cylindrical towers with the arrow-shaped arch between them; that was the way the majority of Bukhara gates were built in the 18th the 19th centuries. But even this fragment looks majestic and impressive. 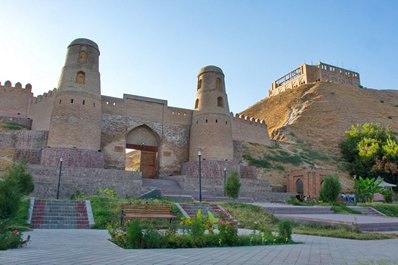 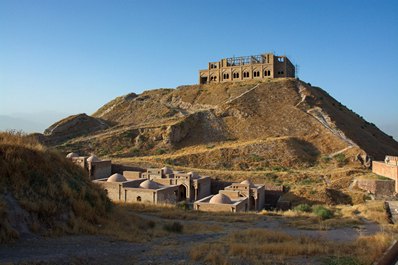 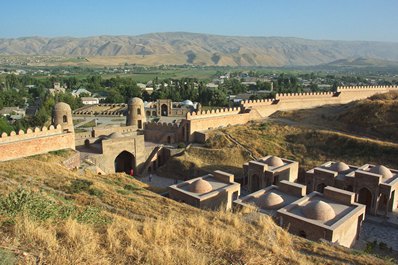 There are many fortress-related legends which are supported by local residents. On one of them runs that the fortress was built by Afrosiab for the purpose of protection from Rustam's armies (both are notorious heroes of Firdausi’s "Shakhname'). According to another legend the righteous caliph Ali came to these places on his horse Duhl-Duhl to preach Islam and camped on a mountain which today is called Роi-Duhl-Duhl (to the west of Hissar). Disguised as an acrobat-rope-walker he made his way from the mountain to the fortress. Someone recognized him there so he was caught and jailed. But his noble steed brought him to sword of Zulfikar. With the help of the sword he managed to defeat all his enemies including the malicious wizard who owned the fortress at that time. Two huge 500 to 700-year-old plane trees stand near the fortress.