About 50% of the glaciation area in Central Asia relates to Tajikistan. There are more than 8,000 glaciers in Tajikistan with the area of 8.5 thousand sq. km. which is more than the area under crops in the Republic. Comparatively large amount of precipitation and low average annual temperatures create in the mountainous regions of Tajikistan such conditions, under which the accumulated winter hard precipitations cannot melt during summer and are collected as snow fields and glaciers; significant differences in physico-geographic conditions stipulate varieties of glaciation types.

Along with compact snow sheets and neve (snow fields) on the slopes of some ranges, as well as large glaciated areas, various types of small glaciers are widely spread. The main part of glaciation is concentrated on the territory adjoining the highest Central Asian peaks: the peak of Communism and the Lenin peak, comprising more than two-thirds of all the glaciation area. In the western regions of the Republic the ranges are not high enough, therefore, though being well moistured, they do not expose developed glaciation. Few glaciers are registered in the Eastern Pamirs due to small amounts of precipitation. A vast area of glaciation is noted in the place of the highest ranges joining: the Range of the Academy of Sciences, the Darvaz, Peter the Great, the Vanch and the Yazgulem ranges. This area is notable for the highest peaks, too, among them are: the peak of Communism, the peak of Eugenia Korzhenevskaya, the Revolution peak. From the Revolution peak to the north, the Fedchenko glacier slides down, it is the largest glacier in Central Asia. (its length is 77 km, the area with the tributaries is 651.7 sq. km. The upper reaches of the glacier with about tributaries are at the 7,480 m height, while its tongue lowers down to 2,910 m. The glacier ice thickness in some places is over 800 m, the ice volume is about 130 sq. km. To the north-east, the Grum-Grzhimailo glacier (142.9 sq. km.) flows down.

In the region of the Communism peak, at the junction of Peter the Great and the Academy of Sciences ranges, a complicated system of large radiating plain glaciers and a vase neve massif, known as "The Pamirs neve plateau" is situated. From the peak of Communism to the south-west, the Garmo glacier which is 114.6 sq. km. slides down; to the north-east, the Bivachni glacier which is 37.1 sq. km. is located, a tributary of the Fedchenko glacier; and at the foothills of the peak, in a narrow deep valley the Fortambek glacier is bedding. 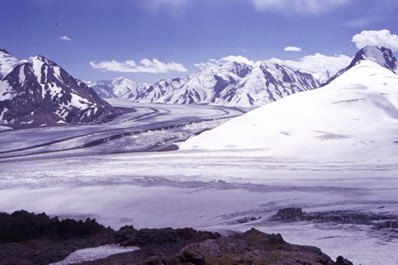 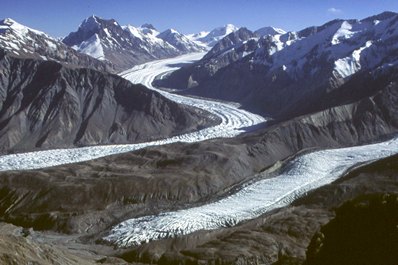 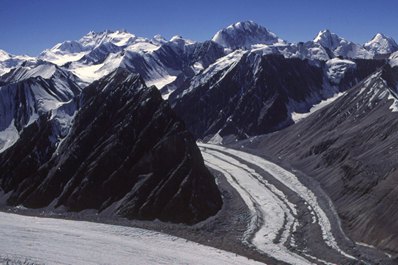 Thttps://www.advantour.com/uzbekistan/adminka/fckeditor/editor/images/spacer.gifhe second significant glaciated area is at the junction of the Zaalai and Zulumart ranges where the Lenin peak is situated. On the slopes of the Lenin peak, a number of glaciers take their origin, the largest of them are: the October (88.2 sq. km.), the Great Sauqdara (53.0 sq. km.) and the Uisu (49.9 sq. km.).

The altitudinal location of the glaciers is not similar and depends both on the climatic conditions and the glacier dimensions. As a rule, the larger glaciers slide down lower than the smaller ones. The averaged altitudes of the glacier lower boundaries are increased from west to east which is connected with the decrease of moisture content in the same direction. The glaciers in the Kafirnihan basin slide the lowest of all (3,650 m), in the Karakul lake basin (4,860 m) their border is the highest.

The glaciers in Tajikistan influence greatly the formation of flow and regime of rivers, as they are, first of all, the moisture accumulators for numerous rivers feeding; and secondly, they are natural flow regulators, giving up, in the process of melting, their water stock to the rivers in hot season when the need for water for agricultural purposes is especially high.