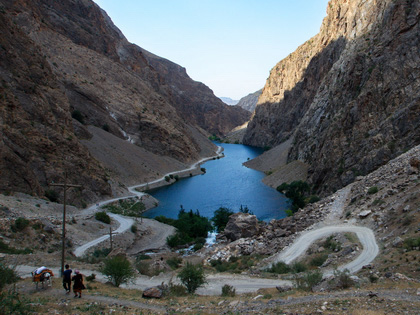 Fascinating tour to the land of mountains where top of the ridges are always covered with snow and where narrow gorges hide small lakes with an amazing color of water. Do not miss your chance to dive into the world of peace and beauty of Tajikistan. 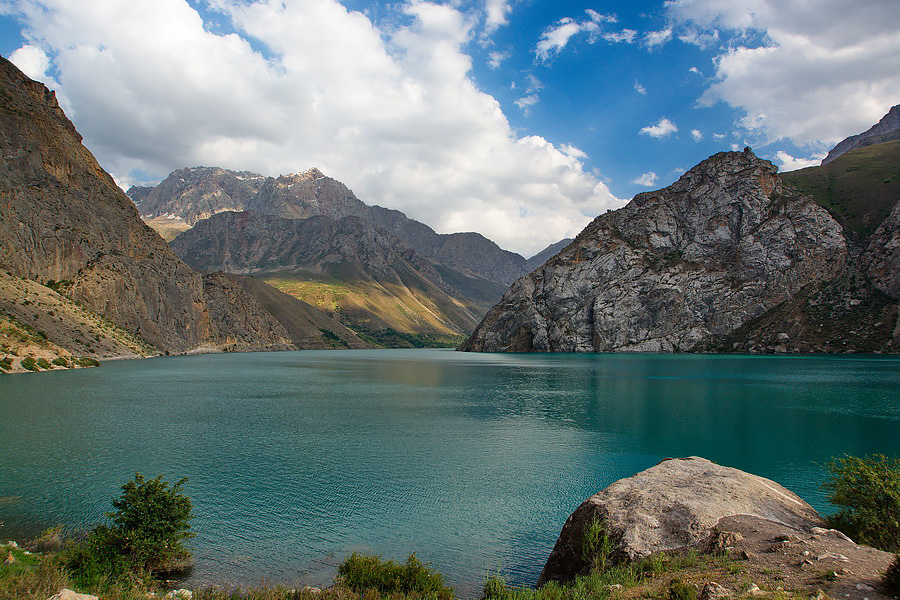 The Seven Diamonds of the Fan Mountains

In western Tajikistan, near the city of Penjikent, a series of incredible and interconnected mountain lakes which amaze visitors with their vibrant colours which constantly change. The lakes are called the Haftkul (which means “Seven Lakes” in Tajik) - sometimes they are also known as Marguzor Lakes (the largest lake in the group). Each lake has its own name and unique stories. Starting from the lowest of the lakes, they are: Nezhigon, Soya, Gushor, Nofin, Khurdak, Marguzor (the largest), and Hazorchashma (the highest).

The Seven Lakes are in the Fan Mountains, in the Shing River gorge. Ancient petroglyphs discovered on the shores of Marguzor indicate that the lakes are very old. The lowest lake is at an elevation of 1,640m while the highest is at 2,400m. The total change in elevation between them is 760m, over more than 14 km. All of the lakes, apart from the highest lake, Hazorchashma, were actually formed through rock falls and landslides damming up the narrow gorge over time.

The lakes are easily accessed through serpentine road passing by all seven lakes and through several villages. The drive from the first lake and last one takes about an hour non-stop. However, due the challenging terrain on the last segment, between lakes six and seven, many visitors opt to hike this part by foot – taking about 30 minutes to do so). It is also possible to hike the distance of the lakes over two days – with the possibility of continuing to more lakes and valleys, discovering the untouched countryside of the Fan mountains.

In recent years, several small villages have developed community-based tourism (CBT) programmes to create guest houses and basic facilities for tourists – particularly around Nofin Lake. These guest houses, though simple, allow visitors to immerse themselves in the local life and atmosphere. It is also popular to camp in many beautiful places along the river and lakes.

Four of the lakes contain small fish, not large enough for catching and eating. Additionally, the lakes are fed by many smaller mountain rivers, and so they become full only around mid-July. In other seasons, the water level can low. 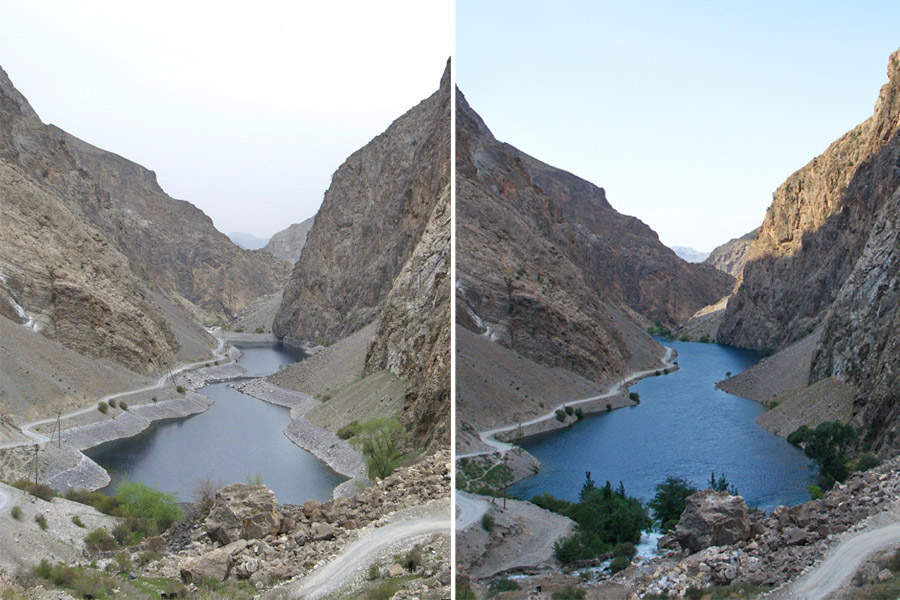 The lowest lake, and most often the first you see as you approach – is Nezhigon, at an elevation of 1,640m. Its name is probably related to a Tajik word for eyelashes, although the connection is not clear. Other names for this lake include Nezhegon, Nezhigok, and Mizhgon. It is up to 20m deep, with an area of just 0.05 sq km.

Nezhigon is especially well known due to its vibrant, seasonally changing colours. Daylight and season, can make the water turquoise, blue, or even purple. This is all thanks to high mineral (sodium and calcium) content of the water. In summer, the water warms up nicely, and visitors can plunge into this mystical lake. 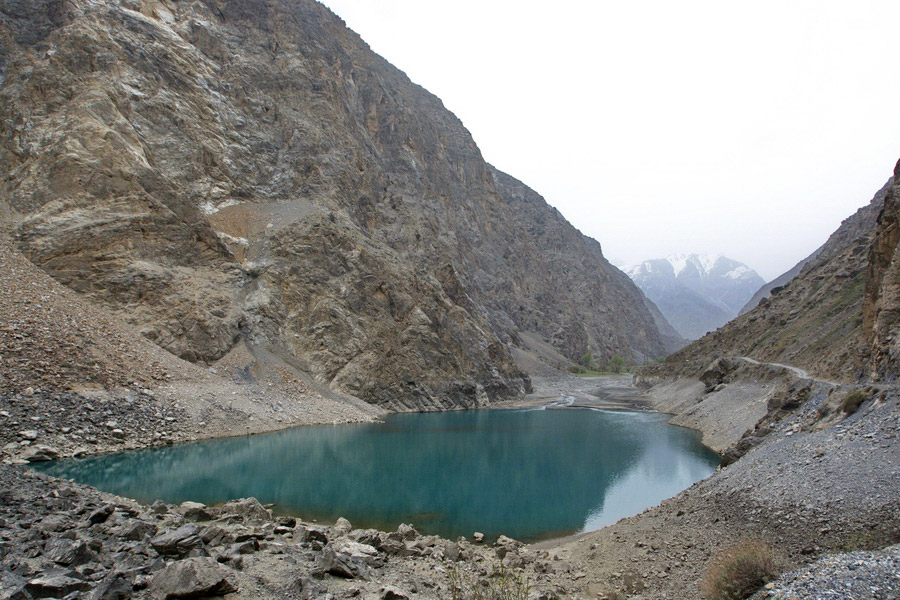 Continuing on from Nezhigon, up the serpentine road, you’ll cross a natural dam separating Nezhigon from the second lake, Soya. Here you can turn back for a stunning view of Nezhigon. The word soya means ‘shadow’ in Tajik, an apt name for a lake wedged between high cliffs, in the shade most of the day.

Like Nezhigon, the water in Lake Soya also changes colour depending on the weather and time of day. The lake is at an altitude of 1,701m and is twice the size of Nezhigon, with an area of 0.1 sq km. 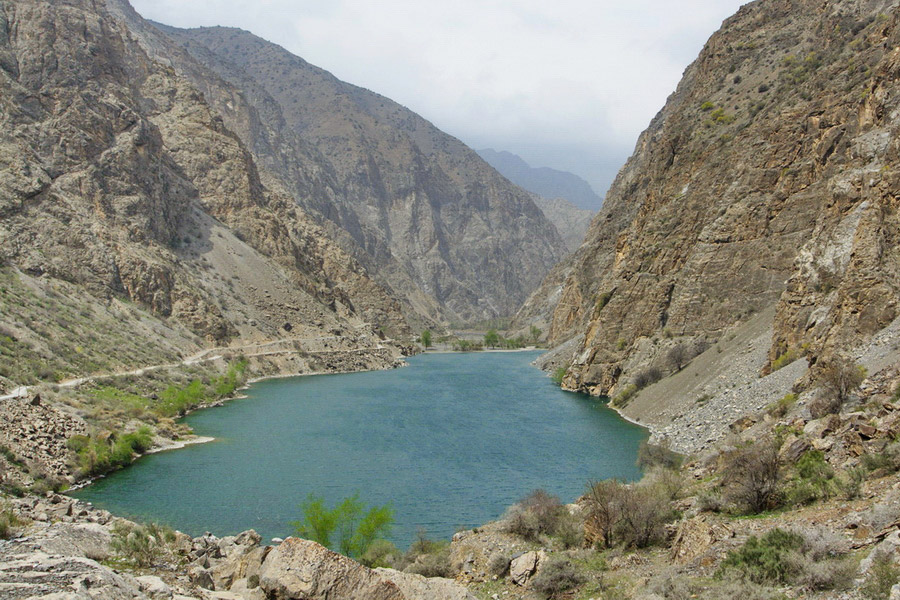 The third lake, Gushor, is only 400m from Soya, and as you approach it you encounter the mighty current of the river between the lakes. At an altitude of 1,771m above sea level, it is more than double the surface area of Soya at an area of 0.23 sq km.

The other names include Khusher and Ishore. These are all connected to the word for “watchful”. Gushor is surrounded by steep cliffs and was once the home of poisonous snakes, which may explain the origin of the name.

In Soviet times, a campsite for the Seven Lakes was located next to Gushor. However, a landslide destroyed the camp leaving only traces. However, the lake and surrounding area is very safe and in good weather one can enjoy schools of fish swimming quietly in the clear water. 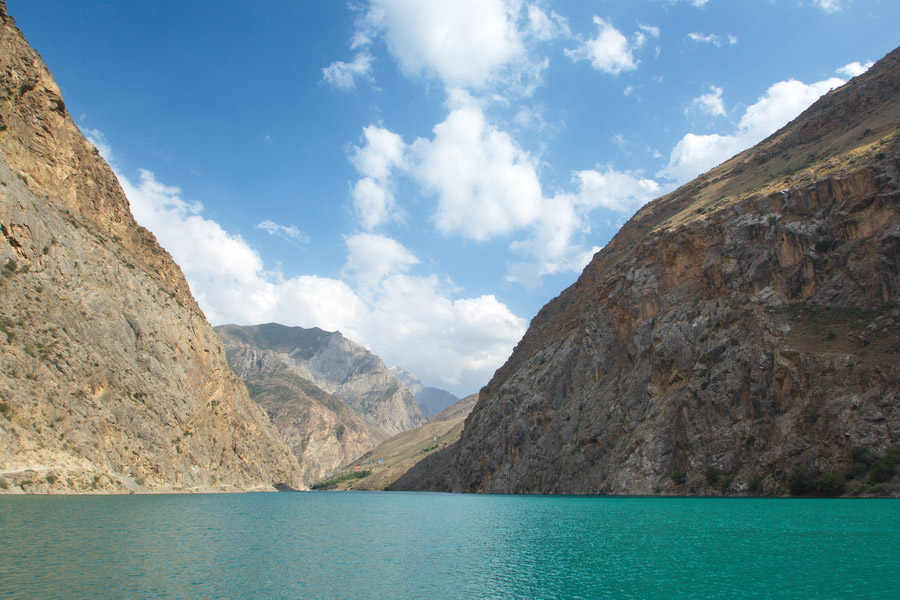 Though the distance between Gushor and the fourth lake of Nofin is only 400m, the route winds along to a full km. Nofin is very elongated: more than 2.5 km long and only 200m wide. This does make it again about twice the size of its lower cousin at 0.48 sq km. The elevation is 1,820m above sea level.

Nofin is an intriguing name, referring to an umbilical cord, possibly because it is in the middle of the seven lakes and very elongated, almost like an umbilical cord. Locals love to tell visitors about the legends and secrets of the lake. The road runs along the eastern shore and sometimes floods in summer, making it difficult for cars to pass. At the far end of the lake is a small village with guest houses run by the local community. 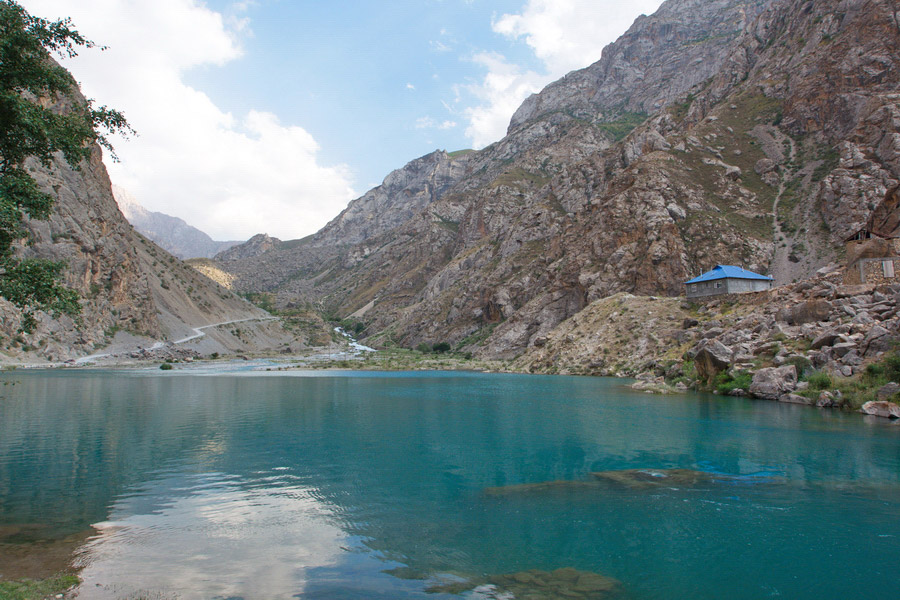 This lake is the smallest of the Seven Lakes, having an area of only 0.025 sq km. Thus it is no surprise that Khurdak is a colloquial word for ‘baby’. Khurdak is at an altitude of 1,870m, and is 1.5 km from Nofin. The village of Padrut is between the lakes and once had a small microhydropower station at providing electricity to Padrut and surrounding areas. 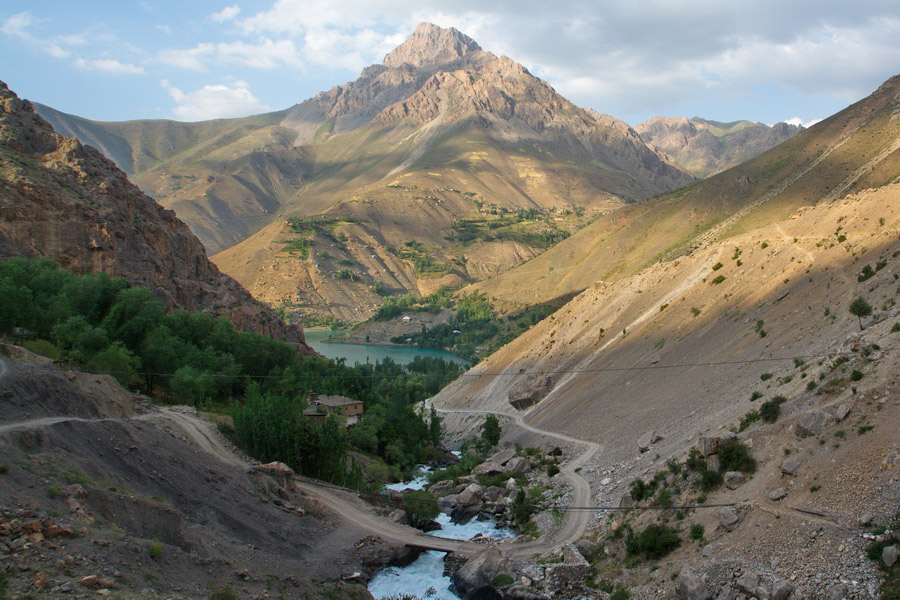 This is the largest and, to many people, the most beautiful of the Seven Lakes. To reach it, you need to continue for more than 2 km along the serpentine road from Khurdak and climb to a height of 2,140m. Marguzor Lake is 2.7 km long, with a total surface area of 1.16 sq km and a maximum depth of 45m. The expanse of brilliant jade-blue water and the majestic mountains in the background create a magnificent landscape for every visitor.

Petroglyphs of early inhabitants have been found on the shores of Marguzor and historical evidence suggests in the Middle Ages semiprecious stones were mined nearby. Today, a small village thrives on the southern shore where locals love to tell legends and fairy-tales about Marguzor.

The road along its eastern shore sometimes nearly reaches the water-level. As a result, the lake can then flood the road, making it hard to pass without a truck or a robust jeep. A trailhead to the Tavasang Pass (3,307m) begins at the southern tip of the lake. This hiking trail is one of the most popular and scenic ones in the Fan Mountains. 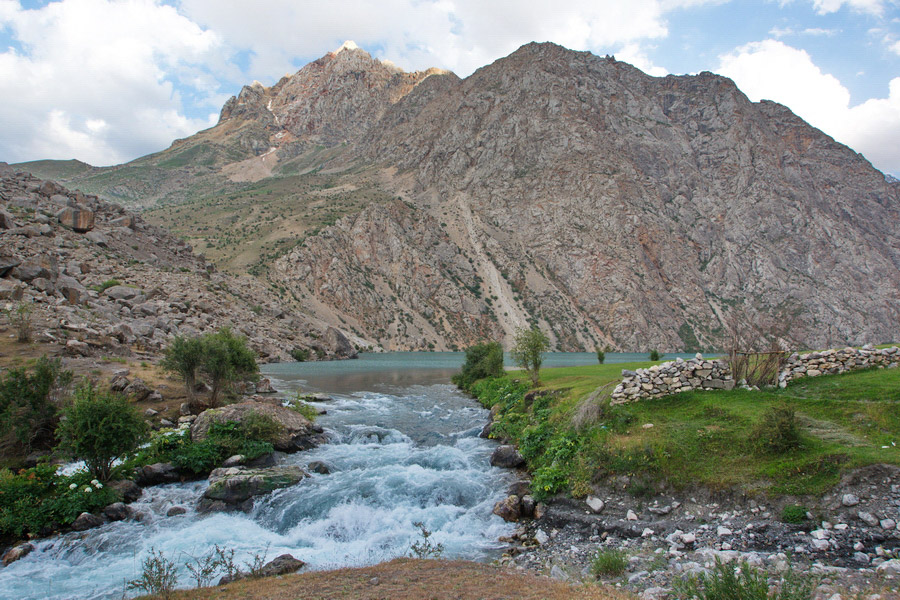 The highest of the Seven Lakes is located at around 2,400m above sea level. Hazorchashma is the second-largest of the lakes, almost the same size as Marguzor, with a length of 2 km and a total area of 0.92 sq kms. The name comes from hazor and chasma, literally: “a thousand springs” referring to the numerous sources of water that feed the river both on and under the ground.

Hazorchashma is the last lake in the Shing River gorge where the Seven Lakes are found. The road ends here and beyond this there are no further human settlements, and all you find after this is only the amazing wildlife of the Fan Mountains. Because of the road ending at the northern shore, most people stay here and only see the one side. However, if you manage to reach the south side of Hazorchashma through hiking, what you will get is simply a magnificent view of the lake and, behind it in the distance, Marguzor and – possibly the other lakes.

How to Get to the Seven Lakes

The only way to reach this spectacle of the Fan Mountains is by car from Penjikent. After a few kms on the main road to Dushanbe, you turn onto a smaller paved road which eventually becomes a dirt road. This journey takes about an hour. Additionally, due to the proximity of the Uzbek border, it is possible to visit the Seven Lakes via Penjikent, but the border crossing will add time to the 100km distance it takes to cover from Samarkand via the Jartepa-Sarazm border crossing.

It’s best to set aside at least a full day to visit the Seven Lakes from Penjikent or Samarkand. Although the distance to the lakes is short, you will likely want to stop at each lake for at least 10-20 minutes, and up to an hour in some places. If you have more time available, the local community-based tourism projects offer great value and insights into the local way of life. Staying overnight also gives you the opportunity for incredible hikes in the mountains with stunning views of these incredible Seven Lakes amidst the Fan mountains.