Anau city, the center of Akhal velayat in Turkmenistan is located not far from Ashgabat. Up to date the city’s population size is about 30,000 people. Anau was awarded the status of a city in 2008. Today it is a fast-growing modern city with a well-developed infrastructure.

The Anau history numbers over 7,000 years. Not far from the modern city there are the ruins of ancient settlements belonging to the Anau culture. This civilization existed approximately in the V-I centuries BC and is a contemporary of Sumerian civilization. The Anau culture was mentioned for the first time in 1904, when Rafael Pampelli, an American archeologist stumbled across the ruins of ancient settlements in the desert of the southern Turkmenistan.

Full-sized exavations were started only in the 70-s, when Soviet archeologists made an amazing discovery: these ruins represented not just a settlement, but a system of several settlements, scattered in the territory of 161km. All the buildings inside the settlements were located several meters from one another and represented premises measured from 100 to 150 m in length, divided into small rooms. Fragments of the structures and household articles found enable us to claim that the Anau civilization was one of the most developed in the territory of Central Asia in the ancient period. 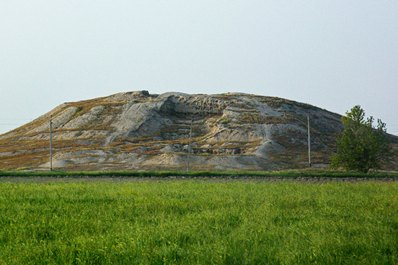 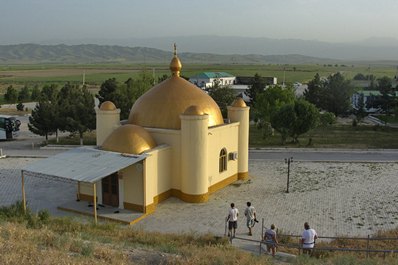 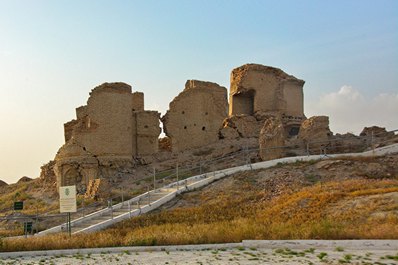 Ceramic and crockery-ware, bone pipes, knives and hatchets with handles shaped in the form of birds were found in the settlement territory. All these artifacts are kept in different world’s museums, including that of Anau city. It is still possible to identify the images of people with an inward slant of the eyes as well as various ornaments, half-erased by time on the walls of some extant houses.

According to some archeological data the Anau civilization was destroyed by the nomads, who came to the Central Asian region late in the II millennium BC, but as early as in the antique period (the III century BC) not far from the ruins of the ancient settlements there sprang up the Anau fortress well preserved and survived up to date. The fortress, erected on a 10-m hill, represents an irregular circle. The fortress with the diameter of about 300m, is surrounded with the fragments of fortress walls with towers and also with the moat filled with earth over several centuries.

The early finds in the fortress confirm the Parthian origin of Anau, in the VIII-XII centuries the fortress was in hands of the Arabs, then it was destroyed by the Mongols, but as early as at the end of the XIII century it was restored again. In the Middle Ages the fortress developed to a small town. Several ancient buildings, the best-known among them is the Seyitdzhemaliddin Mosque, have only survived up to date.

This medieval mosque was constructed in the 15th century, but Ashgabat earthquake in 1948 ruined it. Nowadays we have only its restored pieces. However, the mosque has preserved its significance and is still of a great interest for tourists and researchers. The complex before consisted only of the mosque, tombstone of the burial place of sheikh Jemaliddin and two big blocks with tall domed halls. Restorers managed to bring back the foundations of the portal, brick laying on the square and the grave. The greatest success in their job was restoration of the mosaic picturing dragons twisting by the apple trees and an inscription saying that the mosque was called "House of Beauty".

Images of dragons are not typical for mosques and this painting does not have anything similar in Central Asia. Researchers had been puzzled over this unusual painting located in such an "inappropriate" place. The more convincing decoding of the plot was offered by a well-known archaeologist and arts critic Galina Pugachenkova. She presumed that a dragon is a totem of the main Turkmen tribe who populated the district Anau in the 15th century, and most probably Sheikh Jemaliddin belonged to that tribe, who was also buried in Anau. There is, of course, a beautiful legend explaining appearance of yellow dragons on the mosque: they say that once village dwellers saved a dragon (ajdarha) and were awarded with gold that they spent to build a mosque. Since then, dragon became the totem of the village, locals worshipped it and passed the legend from generation to generation.