Monument of Neutrality – an Architectural Symbol of Modern Turkmenistan

Some people consider the Monument of Neutrality to be one of the world’s most magnificent structures; the others believe that it is an architectural nightmare. But they all call it one of the brightest symbols of modern Turkmenistan.

The 95-m structure like a giant lighthouse dominating over white-marbled Ashgabat is the tallest monument in Turkmenistan. The structure rests on three pylons forming a trivet – a Turkmen hearth stand, symbolizing the strength of the state. The pylons are interconnected with disks and rings of different diameter and thickness to support sky decks. Two pylons are fitted with funiculars, bringing the visitors to the monument first level. At the height of 21.5 m there is a café-bar greeting an excellent panorama of the city. A transparent elevator lifts the visitors even higher – at the height of 50 m to reach an upper sky deck. The structure is crowned with a 12-m sculptural composition – a golden statue of the first president of Turkmenistan Saparmurat Niyazov, raising the arms to the sky on the background of a waving flag.

The Monument of Neutrality is lined with white marble; its pylons and lower cylinder are decorated with bas-relief fragments depicting Turkmen history. The vertical part of the pylons is hooped with five, according the number of Turkmen tribes, bronze rings with national ornaments of Turkmen carpets. Earlier, this gigantic structure was slowly rotating around its axis, making a complete rotation for a period of 24 hours, and today it just faces the city. 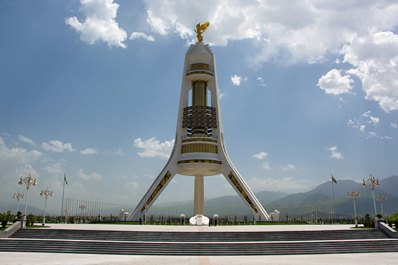 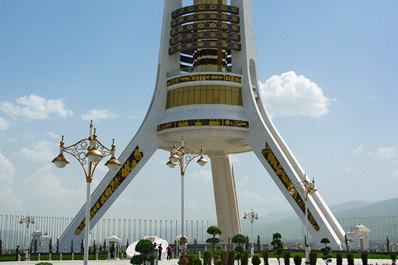 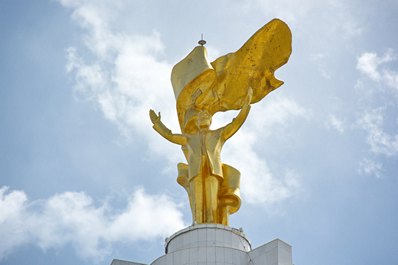 Inside the monument there is the Museum of Neutrality devoted to pages of recent history of Turkmenistan. The Monument of Neutrality is surrounded with a landscaped park zone with fountains, summerhouses and cafes, and in the evening the gigantic structure shines in the lights of color local lighting.

History of Monument of Neutrality

The history of the Monument of Neutrality, initially named as the Arch of Neutrality, started with the gaining an international status of permanent neutrality by Turkmenistan on 12 December 1995. Thus the 50-th session of the UN General Assembly declared Turkmenistan a neutral state, conducting a policy of non-interference in the internal affairs of other states and non-involvement in any military armed conflict.

Since that Turkmenistan began to celebrate 12 December as Day of Neutrality and the same year an idea of construction of the monument in honor of this event was born. In 1996, by decree of Saparmurat Niyazov, the Turkish company “Polimer” launched the construction of the Arch of Neutrality. And as early as December 12, 1998 a ceremonial opening of the 75-m Arch of Neutrality took place in the very center of Ashgabat where it stood up to 2010. In 2010, it was decided to move the arch to the southern part of the city. Over the next two years the arch was reinstalled and moved to the modern highway – Bitarap Turkmenistan Avenue. The Arch of Neutrality was renamed as Monument of Neutrality and its height became 95 m or 2 m higher than the famous Statue of Liberty in the United States.