Tours, Attractions and Things To Do in Dashoguz

Dashoguz is located in the northern part of Turkmenistan. The territory of Dashoguz area hosts the capital of ancient Khoresm - one of the strongest medieval empires in Central Asia - the city of Keneurgench. From 995 when Gurgandzh was the capital of Horezmshakh state and the second-largest and important after Bukhara - a diamond crown of Samanid, this city has preserved its magnificent architectural monuments - il Arslan and khorezmshakh Tekesh mausoleums dated the 12th century. Especially significant 14th century monuments of Keneurgench are Tyurabek-khanym with a mosaic panel on the inner side of the dome which is considered a masterpiece of Oriental art which has no analogues in entire medieval architecture and the grandiose 60-meter Kutlug-Timur the highest in the Central Asia. There are also magnificent ancient fortress cities Devkesen, Shasenem, Zmukshir, Kenevas and a lot of others. 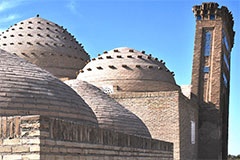 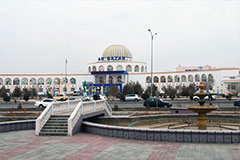 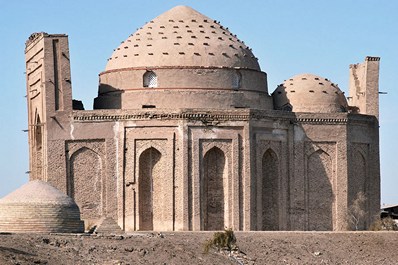 Almost 100 kilometers from the city of Dashoguz (480 km from Ashgabat) is located the ancient city of Kunya-Urgench (Old Urgench). Today this ancient settlement is the state historical and cultural reserve with the area of about 640 hectares (created in 1985).

The name of the city of Urgench is stated in the history of Central Asia with gold letters. In the end of the 10th century Urgench ( formely Gurgandzh) was the capital of the huge and prospering Khorezmshakh state which occupied the entire area of the Amu Darya delta in northern Turkmenistan and western Uzbekistan.

Kunya - Urgench stood on the extremely favorable geographical location - the crossing of two major caravan routes: to the east, to China, and from the south - to the northwest, to the Volga. Such position inevitably influence the city's growth rate and it did grew, quickly expanding turning in to a true center of civilization. In the beginning of the 11th century Gurgandzh became so well-known that eclipsed the glory of Bukhara. Scientists and poets, who glorified the city as "the capital of thousand wise men", flocked there. The ingenious scientist , doctor and philosopher Abu Ali ibn Sina (Avicenna) and the great encyclopaedist Abu Reikhan Berunyi used to live and work there.

During entire 13th century Gurgandzh had been a heart of "the Islamic World" until its governor rebelled against Genghis Khan. Mongols completely destroyed the famous city, razed it to the ground. That is why contemporary Kunya - Urgench is considerably wrecked. Many historical buildings of Kunya-Urgench have remained from the times of Khoresmshakh dynasty. They can serve as examples of the variety of Islamic architecture of Central Asia. Various types of contruction designs, rare dome shapes, tremendous purity of colors - they all cause admiration.

Urgench reached its particular bloom during the rule of Kutlug Timur and his wife Tyurabek-khanym. During this period the most magnificent architectural monuments of Urgench were erected.

The first of them is a jewel of ancient Khoresm - the mausoleum of Tyurabek-khanym and the minaret of Kutlug-Timur. There are also majestic ancient fortified cities like Devkesen, Shasenem, Zmukshir, Kenevas and many others.

Kunya-Urgench is a unique place on the globe. The magnitude and value of its monuments are indisputable. The architectural masterpieces of the city have been entered into the list of the World's Legacy of UNESCO.