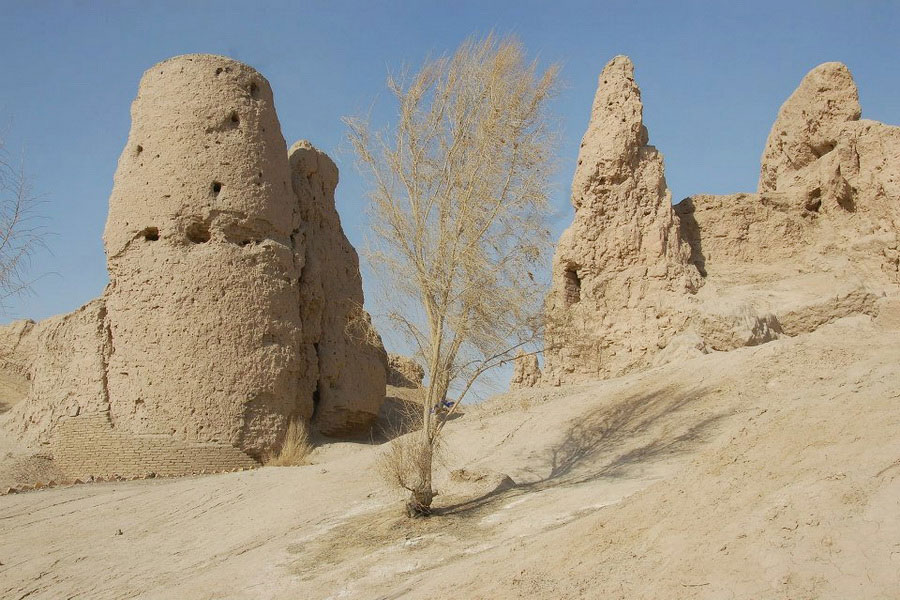 Izmukshir Fortress - under the sands of ancient ruins

Not far from Dashoguz city, 25 km to the south-west, in a desert there are ruins of ancient fortress city Izmukshir (Zamakshar), surfaced with sands. The fortress ruins are located in the territory of the historical and cultural reserve museum Kunya-Urgench, the ancient capital of Khorezmshah's State.

There preserved only vallum fragments and some buildings from the whole fortress once being huge, but even destroyed it strikes with its monumentality and beauty. The length of the vallum that survived up to date amounts to 1,500 m. Right in front of the fortress’s entry, there is a deep town ditch, called as “Gala Kendegi” by the Turkmen. The town ditch was of crescent shape, therefore its depth varied from 1 to 16 m, and width – from 2 to 15 m.

The first structures are supposed to date from the III century BC to III century AD. The fortress reached its zenith of development in the IX-XII centuries in so-called the Oriental Renaissance epoch. Zamakshar was developing and expanding under the Gaznevids, Seljukids, Karakhanids, and reached the zenith of its power during regiment of the Khorezmshakh dynasty. During the Mongolian invasion, Izmukshir like other Khorezmian cities and fortresses was seized and almost completely destroyed.

The Izmukshir Fortress is famous not only for its rich history, but also for an outstanding figure born there. Abu al-Kasim Mahmud ibn Umar az-Zamakhshari was born on 8 March 1075 in the Zamakshar Fortress. When he was young, he served apprenticeship in madrasahs of Bukhara and Samarkand, after that he lived for a long period in Mecca where he received the nick name “Jaralla”, literally translated as “Servitor to God”. He was a scholar, theologian, philosopher and poet, esteemed in the East. Actually he spent all his life away from home, where he only came back when he was old. Zamakhshari died in 1144 in his motherland in the Zamakshar Fortress (Izmukshir).

The desert did not spare the Izmukshir Fortress. Its major part was destroyed beyond retrieve and covered up with sand, but still several buildings managed to survive, giving us an idea about the grandiosity of this structure. The peculiarity of all the extant buildings is arched niches located in the walls. These niches were used as a place to keep dishware and household utensils. Izmukshir history reckons more than 2,000 years. This is one of the Khorezm’s most monumental fortresses which during its long existence was a part of the great states of Central Asia and outlived more than one dynasty of eastern rulers.