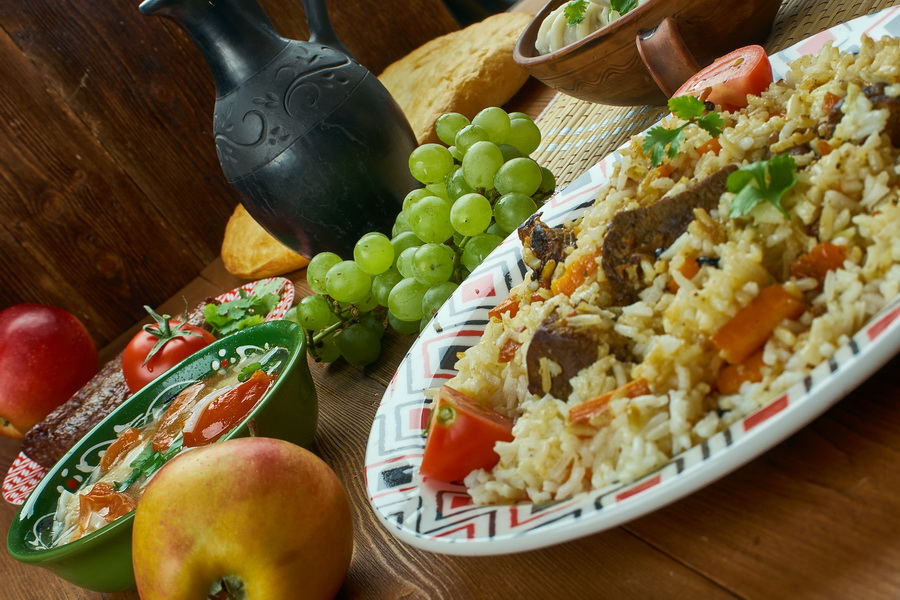 Today in Turkmenistan young camel, mutton and less often goat meat are still consumed. Several notable features of Turkmenistan food set it apart from the cuisines found in other Central Asian nations: In Turkmenistan poultry is more common than beef, and unlike in neighboring Kazakhstan horsemeat is never eaten. Also in contrast with the rest of Central Asia, Turkmenistan is known for its widespread fish dishes, thanks to its long Caspian Sea coastline and the presence of several rivers.

In addition to historical Turkmen recipes and Turkmen dishes, the country is also famous for all variety of melons and other juicy fruits. 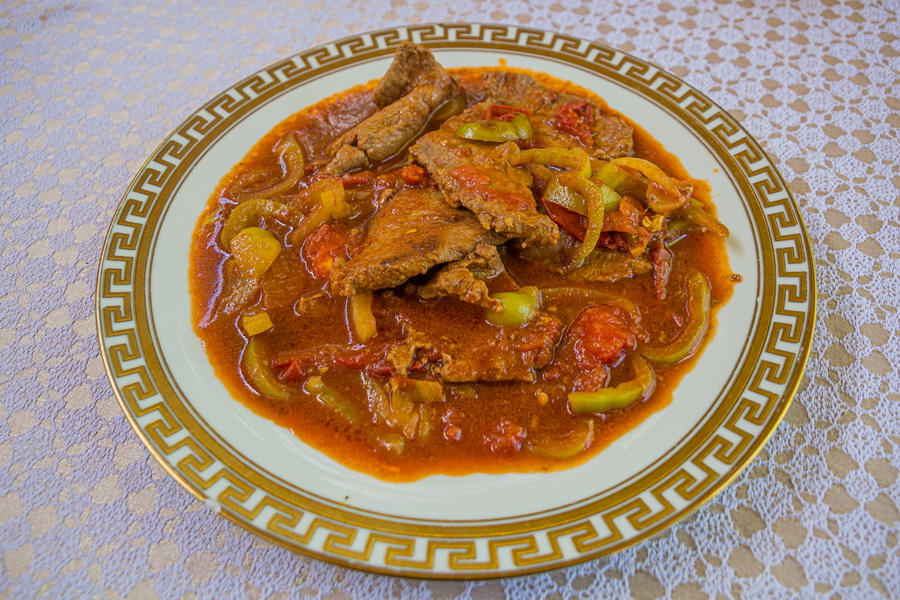 No proper meal in Turkmenistan is complete without meat and meat dishes! Turkmens eat fried, boiled, stewed and baked meat as well as dried and cured meats called kakmach (kokmach) and garyn.

A curious dish for Central Asian cuisine is yshtykma, a stuffed poultry usually made with a duck or goose.

There are dozens of types of kebabs (shashlik). The most famous variety is called keyikjeren kebap and is made from the meat of a young mountain goat.

Turkmen also love a meat and noodle dish called gulak (beshbarmak) and kuurdak, a roasted meat with vegetables. Gazanlama (kazanlama) is meat cooked over hot coals. Buglama is a stew, and tamdyrlama is meat baked in a traditional clay oven called a tamdyr.

But the most popular Turkmenistan food is a rice dish called ash (pilaf). In contrast to the pilaf of neighboring countries, Turkmen pilaf is made from poultry and apricots instead of red meat and raisins.

Turkmens also adore a dish called yoke as much as pilaf. Yoke is a crushed grain and wheat porridge cooked in meat broth. 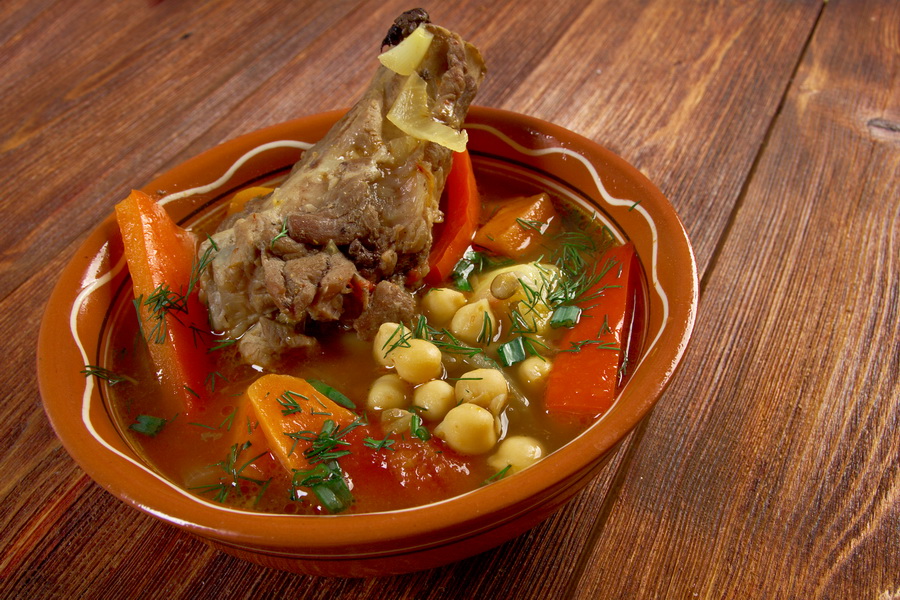 Soups abound in Turkmenistan and are served for both everyday and festive events.

Chorba is a lamb broth flavored with spices. Gara-chorba is a tomato soup and kovurma-chobra is a soup in which the meat is fried and then boiled.

Bean soups are very popular as a Turkmen national food and include gainatma (pea soup); unash (bean soup with noodles); chorba-mash, made from green mung beans; and nohudli-chorba (nokudli chorba), made with chickpeas and lamb.

There is also a dumpling soup called etli-borek chorbasy and a sausage soup called kyufta shurpa.

Dogroma chorba consists of mutton, offal, chunks of bread (chorek) and sour plums. Mastava is a rice soup, umpach zashi a soup made from toasted flour, herbs, onions and spices and naryn a soup made from thinly chopped noodles, meat and broth. 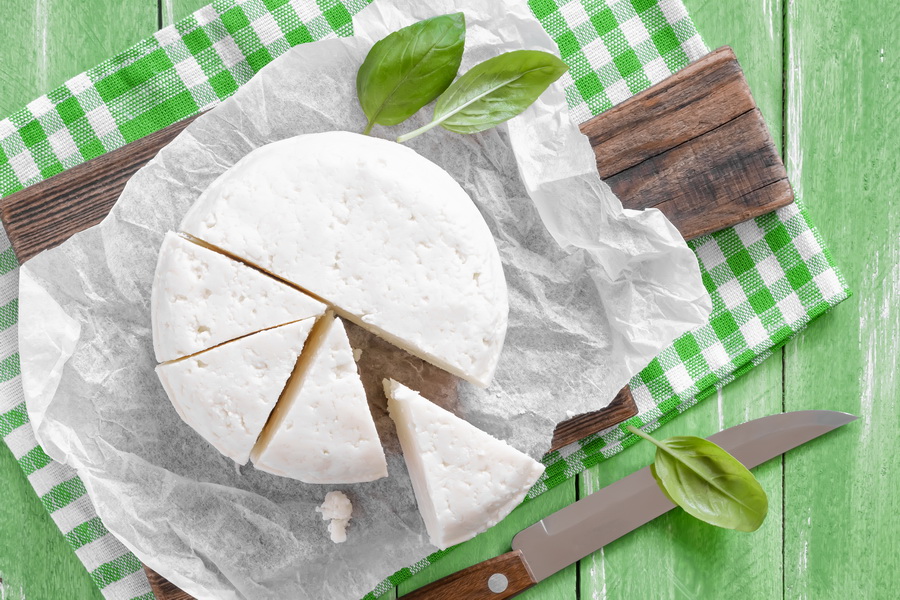 Turkmens drink a lot of sheep and camel milk and are known for their many dairy and fermented milk products.

Gatyk is served in almost every home. This thick kefir can be eaten with soup, meat dishes or simply with a hot flatbread.

Katyk is a thick yogurt.

Sary Yag is a ghee made from camel milk.

Herd is a round dried cheese.

Teleme is a cheese made from sheep's milk which has the consistency of curds.

Turkmen dough products have won the heart of the locals and of many a tourist.

Among the most common dough dishes are dumplings called etli-borek and manti (berek). Unlike in other Central Asian nations, these dumplings are made not just with minced meat but also with spinach and an herb called purslane. In the Lebap Region they even love to eat these dumplings with raw eggs.

Savory pies are often made in Turkmenistan. Ishlekli is a festive meat pie baked between two frying pans in the ashes of a tandoor oven. Gutab (gutapa) resembles the Russian cheburek in shape and is filled with greens or spinach. Atli-nan is a meat pie and fitch a type of mutton pie.

Squirrel is a dish made from unleavened dough which is rolled into small squares, boiled and laid out on a plate. A hot meat broth and dairy products are then poured on top.

Hagenek is a batter made from flour, eggs, milk and salt which is poured into a pan and baked.

Jazhyly bukche is a dough dish made using the insides of a ram.

In northern Turkmenistan they love to eat byzmyk, a semi-liquid dough squeezed by hand into boiling meat broth.

Dograma is a dish made from boiled meat, onions and pieces of flaky bread. The ingredients are mixed together and covered in a hot broth. 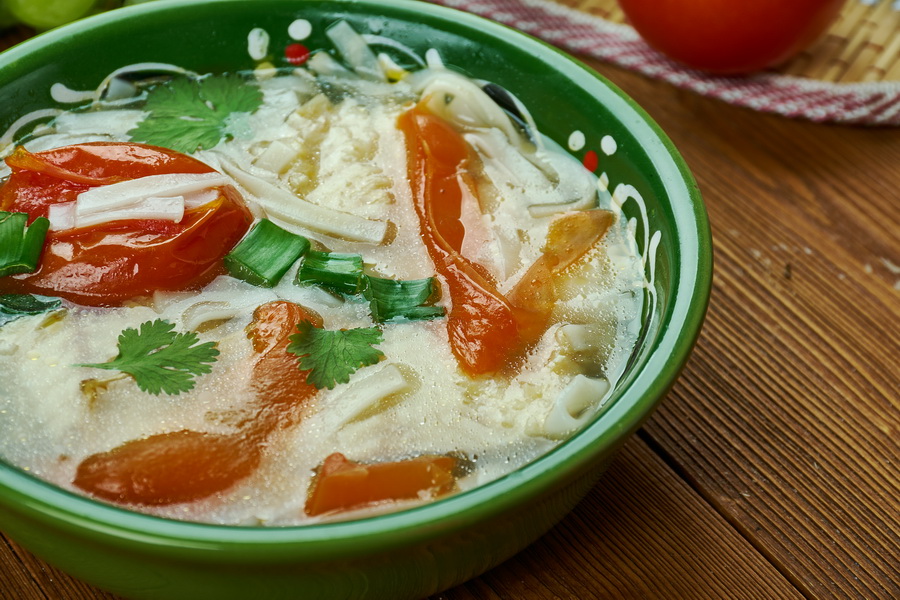 The best fish dishes are prepared by Ogurdzhali residents along the Caspian coastline, who make various roasted and fried fish dishes along with kebabs and even fish pilaf. Pilaf from fish is called balikly yanahli ash. The fish for pilaf is first boiled in broth with herbs and then stewed in sour cream.

Balyk berek - manti with fish - is a very popular food in Turkmenistan, as is ogurdzhalinskaya shorba, a noodle soup with fish. 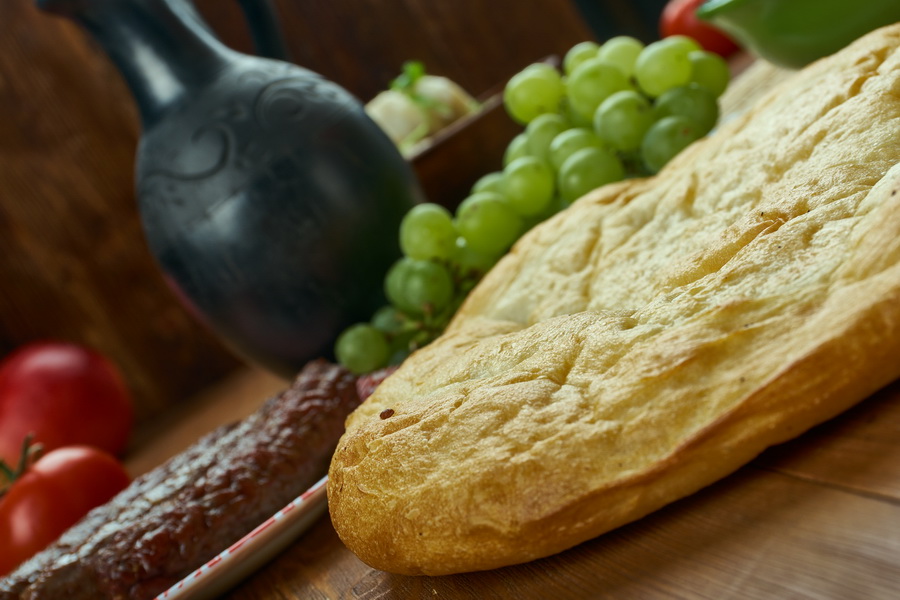 Bread in Turkmenistan is the second most popular product after meat. As in ancient times, today it is customary to bake it in a clay tamdyr oven, also called a tandoor.

Although most local breads are made from a sour yeast dough, unleavened bread can also be found.

Tea is the main drink of Turkmenistan, and locals can literally drink it by the liter. In some regions of the country they like green tea (gok or gek chai) and in others black tea (gara chai).

The curious chorbo tea is made from camel thorn and includes chunks of meat and butter.

Agaran is a drink made from camel milk and sourdough which is stirred occasionally as it is left for two days in a dark place.

Wines such as Yasman-Salyk, Kopetdag and Dashgala and the brandy President are also very popular. 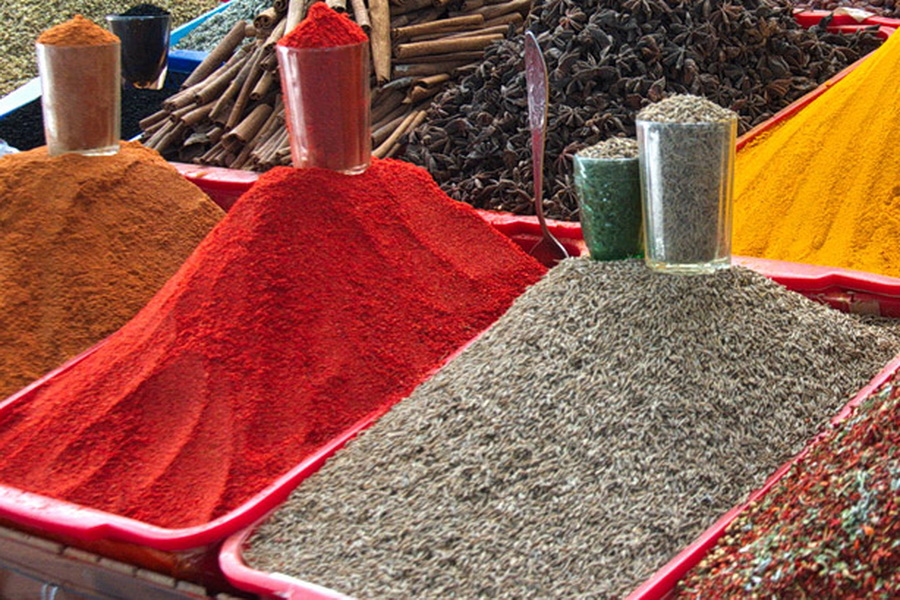 Food in Turkmenistan is not complete without spices! These include pepper (red and black), parsley, mint, cumin, saffron, garlic, uzhgun or buzhguctu (pistachio galls), sesame seeds and more.

Seasonings are added not only to meat but also to fish dishes, soups, drinks and even sweets. 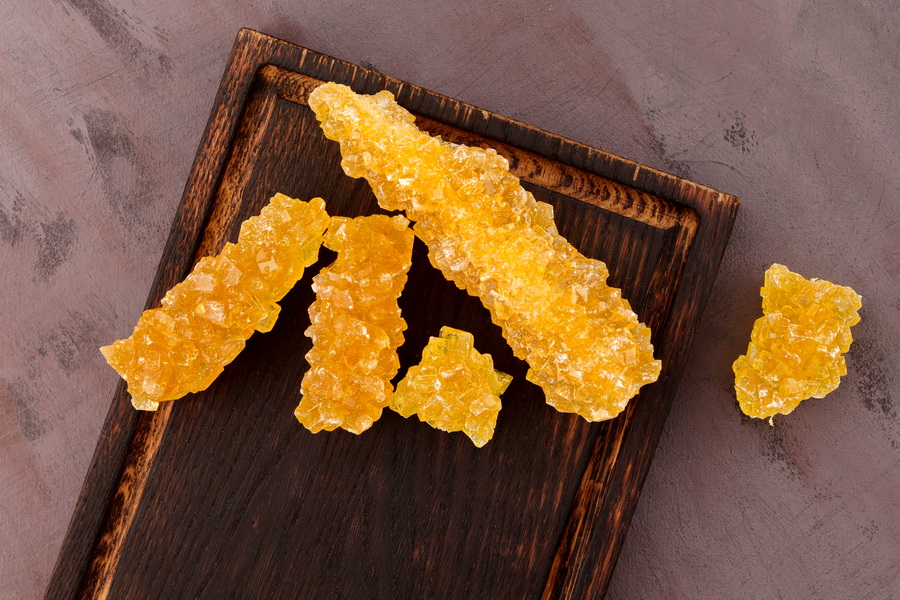 World-famous Turkmen melons are the country’s finest dessert, although its honey, halva and dried fruits are also very delicious.

One of the most famous desserts in Turkmenistan is a jam made from the roots of a lily tree. Pies stuffed with persimmons also offer an unusual sweetness.

In Turkmenistan they like various square pastries made from yeast dough as well as shortbread cakes called kulche. No meal is complete without bakhlava (pastries with nuts and honey) and nabat (yellow crystalline sugar).

Syumelek is a dessert made from sprouted wheat which is prepared once a year for Novruz (Persian New Year).

Turkmenistan food, whether in the form of a meat or dough dish, a hearty soup or a hot loaf of bread, is a chance to experience the culture of this unique land. 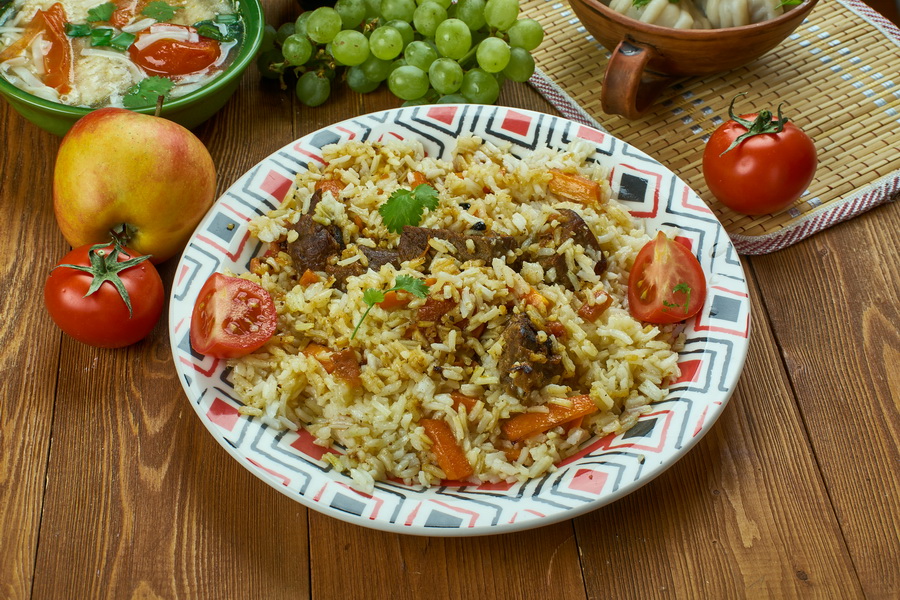 Although it is commonly understood that Central Asian people regard pilaf as the ultimate festive food, this is not entirely true. In addition to pilaf, the Turkmen have been preparing many other celebratory dishes for generations. To be a guest at holidays and special events is a unique and special opportunity. Should you find yourself at such a gathering in Turkmenistan, here are some of the delectable Turkmen holiday dishes you might be served: kazanlama, dzhazhyly bukche, Turkmen pilaf and dograma.

The Trans-Caspian Turkmen are distinguished from their Central Asian neighbors by their love for white meat, particularly waterfowl. Among Turkmen poultry dishes, a stewed stuffed poultry called yshtykma is particularly delightful.