The most majestic architectural monument of Merv is Sultan Sandzhar Mausoleum also known as 'Dar-al-Akhyre" (" The Other World"). It vividly reflects the greatest achievements and prosperity of Seljuks. Sultan Sandzhar Mausoleum is located in the center of ancient settlement of Sultan - Kala. Nearby there are big monumental buildings - the palaces of Seljuk rulers and a mosque.

Sultan Sandzhar Mausoleum is a true medieval skyscraper of cubic shape crowned by a two-level dome with turquoise encasement. Under the dome run three-level through galleries in the form of alternating openwork arches. The dome symbolized the firmament and "floated" in the air. The architecture of Sultan Sandzhar Mausoleum amazes with harmony and symmetry of proportions. Its walls are thick at the base. The overall wall length is 27 meters . The height of the mausoleum is 38 m. 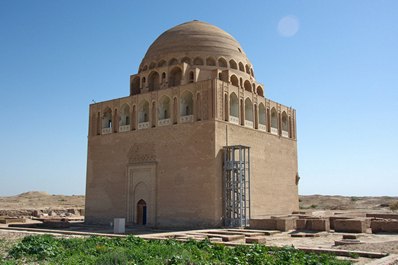 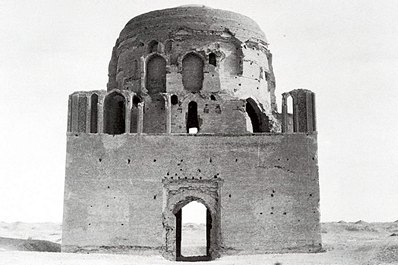 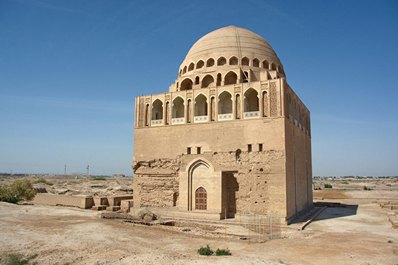 The mausoleum was constructed by the order of Sultan Muizeddin Sandzhar. He was buried in 1157. However, in 1221 when Mongolian armies besieged Merv the remains of the Sultan were reburied in an unknown time and place. So there is emptiness under the tombstone of the mausoleum.

But the Arabian inscription on its facade says: "This place is ennobled by the remains of the one who was called Sultan Sandzhar from the descendants of Turks-Seljuks... He was Alexander the Great of his time; he was the patron of scientists and poets and was accepted by Islamic world in the state of prosperity and happiness owing to sciences and arts".

The mausoleum is a place of pilgrimage of thousands of believers let alone the fact that it is the main attraction for foreign tourists. 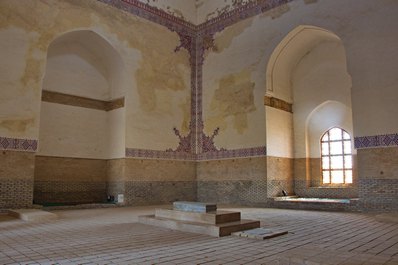 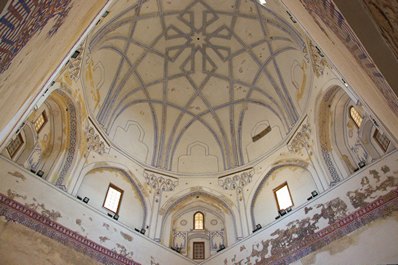 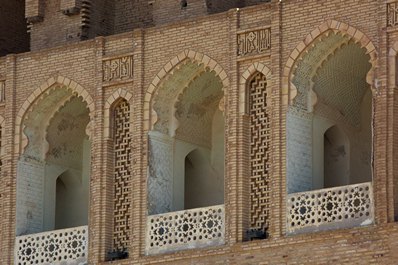 By the way, there is a legend of Sultan Sandzhar Mausoleum… «once upon a time he fell in love with a heavenly magic woman - peri. In reply to his proposal the peri said: "I can be yours on the condition you fulfill my three requests. The first: you can't embrace my waist. The second: you are not allowed to look at my feet when I run. The third: you can't watch me brushing my hair. Sultan Sandzhar accepted the conditions and married the peri. But his curiosity was so strong that he broke all his three promises. When he embraced the fine maiden's waist he found that peri had no bones. When he looked at her feet when she was running the sultan understood that peri was flying above the land and finally he discovered that the magic woman had to remove her head in order to brush her hair. Having learned about the broken promises the peri got terribly; she turned into a white bird, and soared high in the sky. Sultan Sandzhar tearfully begged her: "I shall die if I don't see you again". Disappearing in clouds the bird replied: "If you want to see me, you should build the highest and the most beautiful building in the center of the city. Do not forget to leave a hole in the dome. Every Friday I shall look inside and you will see me". So it was because of the peri that this mausoleum was built.