Historical and Cultural Tourism in Turkmenistan 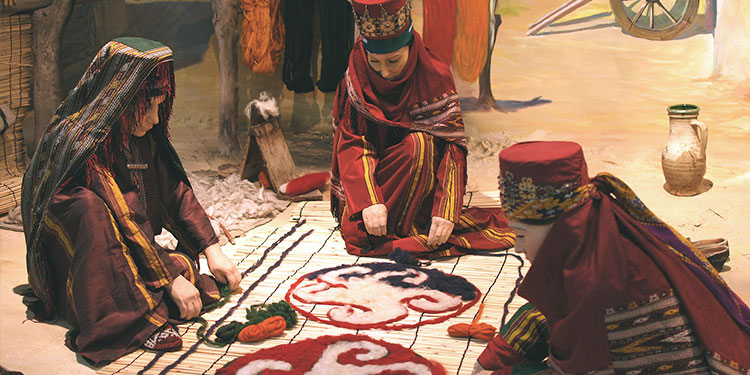 Historical and cultural tourism in Turkmenistan will satisfy the curiosity of even the most seasoned of travelers and well-versed history buffs. The country lies replete with grand palaces of the Timurid and Khorezmshah Dynasties, evocative ruins of entire cities and madrasahs once famous throughout the Islamic world. Yet alongside these treasures of antiquity is a well-developed capital city and a modern, uniquely Turkmenistan culture.

Turkmenistan boasts of three sprawling UNESCO World Heritage Sites, namely the cities of Merv, Nisa and Kunya-Urgench. The latter two were ancient capitals of Parthia and Khorezm respectively, while the former was a major Silk Road post. Along with the active archaeological site of Gonur-Tepe (Gonur Depe), each city offers hours of hands-on discovery of pottery-strewn homes, palace foundations, temples and fortresses.

Turkmenistan history has a way of popping up in the most unlikely places. Just when you think you’ve crossed the threshold of human habitation, the desert ruins of Dekhistan appear in all their faded glory, beckoning you to crawl and clamber your way over city walls and up rickety towers. Not far away, arguably the oldest mosque in Central Asia stands guard over a rustic cemetery. On the opposite end of the Karakum Desert, Amul Settlement proudly displays its accordion-style walls and photogenic archways, while the medieval caravanserai known as Dayakhatyn (Bai-Khatyn) still welcomes and amazes sojourners from afar.

If you’re looking for a more rustic setting, Turkmenistan tourism offers the scenic mountain village of Nokhur, where superstition and deep-seated traditions can be traced in everything from clothing styles and cobblestone walls to revered caves and unusual cemeteries. Desert villages and outlying towns such as Mary, Balkanabat and Turkmenabat likewise provide unique opportunities to come face-to-face with the rural Turkmenistan population and a culture bearing heavy influence from ancient warring nomads, Soviet occupation and the present-day impact of a reclusive environment.

No matter which corner of this country you choose to explore, opportunities for historical and cultural tourism in Turkmenistan abound.