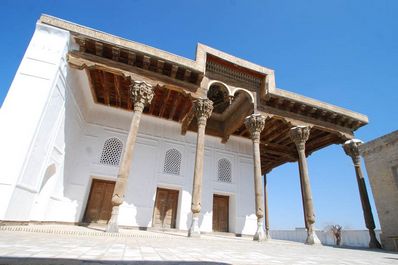 Straight before the entrance into Ark, you can see the ayvan of palace mosque – Djami, it was built in 18 century like type of large quarterly mosque: four-pillared winter garden, surrounded by three-side ayvan. Design of interieur is typical for 19 century – beginning of 20 century. Last repairment was made in 1910-1920 with the participation of famous Uzbek master Usto-Shirin Muradov, making out fretwork on ganch.