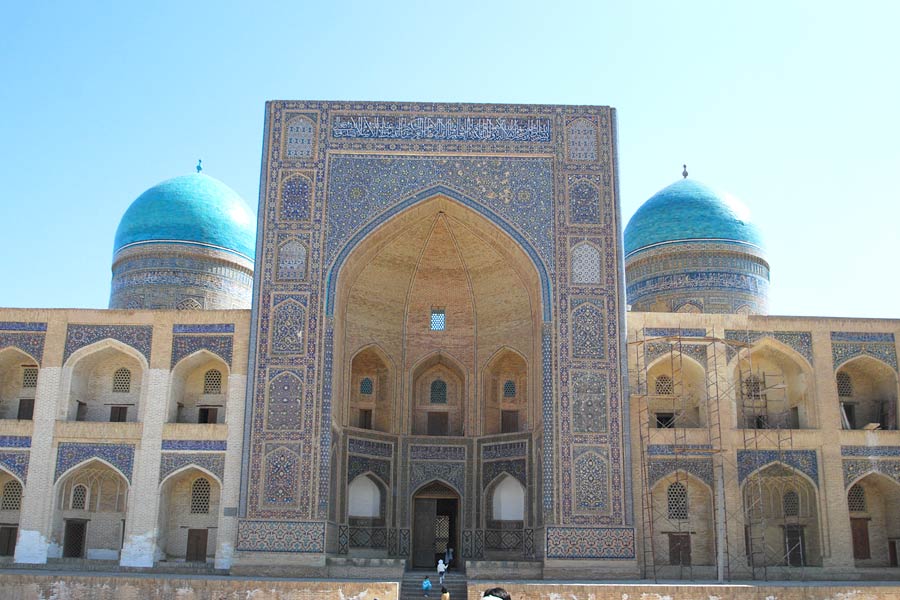 There are two big blue domes of the Miri-Arab madrasah towering above the surrounding buildings in the center of Bukhara. Along with the Kalyan mosque and minaret, this religious educational establishment forms the whole ensemble Poi-Kalyan that is the spiritual center of the city.

Construction of the Miri-Arab madrasah dates back to the 16th century and is related to the sheikh Abdallah Yamani (from Yemen), the spiritual pir (guide) of sheybanids. The exact date of the beginning of the construction is still unknown. According to one version, scientists believe that the building was erected in the period of 1530-1535/1536. The other version states, that the madrasah was built to celebrate the victory of the sheybanid army over the troops of the Sefevid shah Ismail I in the battle of Gijduvan in 1512. It is also supposed that the final construction works were carried out on the funds of Ubaydulla-khan; the money received from the sale of 3000 captive Iranians to slavery.

This madrasah is considered one of the most interesting monuments of Bukhara, and is still an acting institution, where future imams and religious mentors receive their education.

Traditional national architecture is peculiar to this building – a square yard, surrounded with two floors of cells, two big domed halls in the left and right corners. There are two-store loggias adjoining the main façade in the center highlighted with a portal. The inner yard is adorned with composed carved mosaic. In the center of the madrassah, there is a shrine of Ubaydulla – emir of Bukhara, who had ruled the city in the period of 1533-1540. In the head of the building, you will see a burial place of the spiritual guide of the khan – Miri Arab (sheikh Abdallah Yamani), in whose honor the building got its name. The senior teacher of Ubaydulla – MukhammadKasimwas also buried there.

The décor of the Miri-Arab madrassah has dominance of different stone mosaics of exquisite work with geometric, vegetative and calligraphic writings and patterns. The portal, tympanums of loggias of the main façade, tympanums of hujra arches in inner facades and dome drums are adorned with artistic works. External domes are covered with calottes of blue tiles. In the inner decoration of the building, it is important to pay attention to the colorfully arranged mausoleum. Its panels and grates are decorated with carved mosaic from colorful stones and walls and shade are adorned with ganch (ganch – material similar to gypsum building plaster).

Miri-Arab madrasah was the only spiritual educational establishment in the USSR that had begun to function after the WWII. All leading imams of those times had graduated from this religious center.

Décor and architecture of the building are done in exquisite oriental taste. The monuments had gone through many destructions, but restorers managed to reconstruct the large part of the building, returning its initial look. As in the ancient times, grand façade makes any visitor admire its beautiful layout.