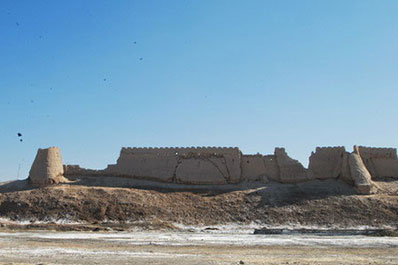 In the 5th century Ephtalites conquered all the cities of Central Asia and created a vast empire that stretched from the Caspian Sea to Kashgar, and from the Aral Sea to India. They preferred not to interfere in politics of Sogdiana, which meanwhile had been divided into many kingdoms, the largest of which was Samarkand. Ephtalits promoted Buddhist traditions, they built many Buddhist temples. Ephtalites carried on active foreign trade through the Great Silk Road. They had good relations with China, India and Byzantine. They traded silk, jewelry and spices. 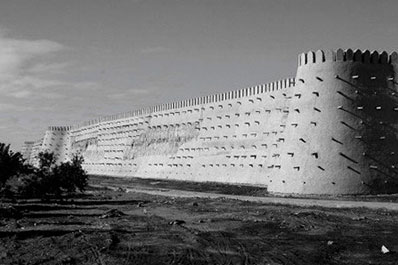 In the 6th century the Ephtalite State was destroyed by the Turks, who in 550-750 through the union of various nomadic tribes and Altai nations established a powerful state, Turkic Khanate, stretching from China to the Volga. Central Asia became its part. Turkic Khanate lived by endless wars, by which it became richer. Captives were settled in special villages and paid to Khagans by products or handicrafts. Sogdiana and Fergana cities under the reign of Turks preserved a relative autonomy and paid only a tribute to kaghans.

The Turkic Khanate took part in political and economic relations of the largest states of that period: Byzantine, Sasanid Empire, Iran and China and struggled for the control on the Silk Road. Cotton and silk production were actively developed. In the early Middle Ages cotton and silk were the main resources of the region; local gold and silver were highly estimated too. 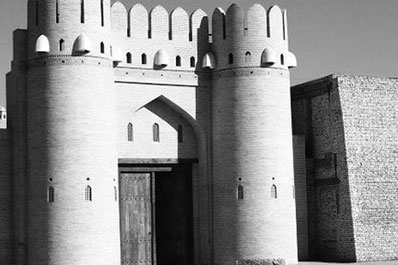 In the 7th century AD a Sogdian fertile land became a subject of keen interest of the Arabs who from 673 started to invade these lands. The Arabs called it Mawarannahr ("that which is beyond the river"). In 709-712 the Arab leader Ibn Muslim Kuteiba conquered the main centers of Mawarannhr: Samarkand, Bukhara and Khorezm. As a result, Uzbekistan and practically the whole Central Asia became a part of the Arab Caliphate under the control of the Baghdad caliphs (Omeiad Dynasty till the middle of 8th century and since 750 the Abassid dynasty). The Arab influence in the Mawarannahr became dominant. The Arabs brought Islam and forcibly converted residents of the conquered lands to this new religion. By the 10th century the entire population of Mawarannahr (the region between the Amu Darya and Syr Darya) adopted Islam. All attempts of local people to resist the invaders were not successful. But such major rebellions as the rebellion of Mukanna and Rafi ibn Leis forever remained in the chronicles of the liberation movements of Central Asian nations. 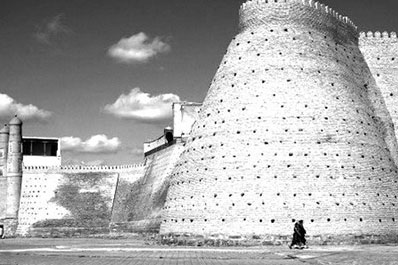 Baghdad caliphs appointed governors in the conquered regions from the Persian officials. In 821 Abdullah ibn Takhir was appointed the Governor of Khorasan. He founded the Takhirid Dynasty, influence of which spread to Chorasan and Mawarannahr. During the Arab conquest economy and culture of the region were almost destroyed. Hundreds of the most precious monuments were ruined. Arabic became a state official language. Takhirids took decisive measures to organize strong power and to order agriculture. They improved water supply and constructed new channels. By an order of Abdallah ibn Takhir, outstanding lawyers of the country worked out standards to use water for irrigations. For two centuries these works had served as the guidance to solve disputes in water consumption matters . 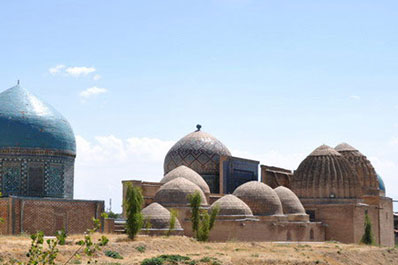 Lest the possession of Chorasan and Mawarannahr do not increase too much the power of the Takhirid Empire, the caliphate began to strongly promote the Persian race of Samanids. The descendants of the founder of the Saman-Khudat kin were appointed the governors of Mawarannahr cities: Nuh in Samarkand, Ahmad in Fergana, Yahya in Tashkent and Ilyas in Herat. In 900, the Samanids attached Chorasan to their possessions. Samanids became the founders of the first centralized feudal state in Mawarannahr with the capital in Bukhara. Their reign lasted till 999. Samanids created new economy based on the reasonable tax collection, organized efficient work of the state apparatus. Samanids contributed to the unprecedented rise in cultural life. Bukhara, Merv, Samarkand, Urgench were worldwide famous centers of science and culture in the early Middle Ages. Trade flourished as never before. Particularly Samarkand paper and glass as well as leather, cloth, silk and wool were in demand.

In the end of the 10th century the Turkic tribes (the remnants of once powerful Turkic Khanate) founded a new state headed by a dynasty of Karakhanids, which in 992-999 won Mawarannahr. In 999 the Karakhanid Dynasty took the place of Samanids in Samarkand and Bukhara. Karakhanids had been ruling for 200 years, almost till the Mongol invasion in the 13th century, with short break in the 11th century, when Seljuks came to the power. State borders were constantly changing at that time.

In the period of Samanid dynasty, Makhmud of Ghazni (city of Ghazni in eastern Afghanistan) was appointed the governor of Chorasan. Taking advantage of revolts in the Samanid State, he began to interfere in the affairs of Mawarannahr and infringe on the heritage of the Samanids. But he could not break the influence of Karakhanids who had already consolidated their position in the conquered Mawarannakhr and moved to Khorezm, which was a separate state at that time. In 1017 he defeated and destroyed Khorezm. Then he decided to conquer India. Makhmud of Ghazni made 15 campaigns to India from 1002 to 1026. In the 12th century Ghaznavid Dynasty was replaced by Ghurids Dynasty.

In 1040 the state, created by Makhmud of Ghazni, was weakened by the nomads, the Seljuk-Turks tribes. Ghaznavids were unable to hold power for long and by 1059 Seljuks had taken over Chorasan and Mawaranahr. As the result of countless conquests these tribes succeeded to create a great empire at the turn of the 11th-12th centuries. This empire included Asia Minor, Middle East and major part of the Armenian-Kurdish highlands. Following the approval of Western domination Seljuks transferred their attention to the east, namely to Mawarannahr. They conquered it in 1097. During the Seljuk reign, territory of modern Uzbekistan was decorated with many wonderful palaces and buildings. Architecture, crafts, arts and culture were flourishing. In the 12th century Mawarannahr was invaded by new nomadic tribes, Kara-Khitan. They conquered the entire Mawarannahr, large areas from Khorezm to Kashgar. Defeating the Seljuk Empire, Kara-Khitan created all the prerequisites for the strengthening of a powerful state of Khorezmshahs in the early Middle Ages.