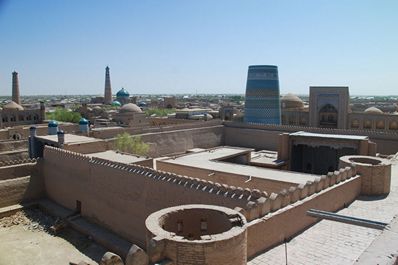 In the 11th century the Seljuk sultan appointed faithful Anushtegin Muhammad to be the ruler of Khorezm and gave him the title of Khorezmshah. Descendants of Anushtegin began their war for independence of Khorezm and soon conquered a vast area, which included Mawarannahr, Chorasan, Herat, Merv and other cities. Khorezm reached its prosperity during the reign of Tekesh. Khorezm was one of the most powerful medieval Asian states. Science and culture were developed.

The invasion of Genghis Khan 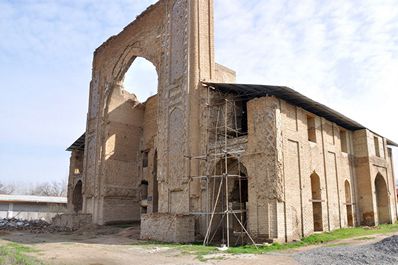 After the conquest of China in 1215 Genghis Khan started the invasion of Mawarannahr. The State of Khorezmshakhs was not ready for the invasion of such a powerful enemy. Khorezm Shah Muhammad beat in hastily retreat to Balkh, taking all valuables. Under the leadership of his eldest son, a talented military commander Dzhalaleddin Manguberdi, local people entered into the struggle against the Mongolian invasion. But forces were unequal, and the Mongols conquered and destroyed Khorezm oasis cities almost without difficulties. In 1220-1221 Mongols ruined Samarkand and Urgench (capital of Gurganj State) to the ground. Many monuments of ancient culture of Central Asia were destroyed in the Middle Ages.

Under the Mongols. Chagatai Ulus

A vast empire of Genghis Khan went to his three sons: Jochi, Ugedei and Chagatai. Possession of Chagatai Khan stretched from Chinese Xinjiang to Samarkand and Bukhara, and from the southern Altai to the Amu Darya. These lands were called the Chagatai Ulus. Mongol rulers appointed Muslim merchants the governors of Mawarannahr, who forced people to pay overtax. Again and again rebellions were stirred up (for example, under the leadership of Mahmoud Taraba in Bukhara in 1238), which were cruelly suppressed. Such instability caused to the break up of Mawarannahr into small possessions, competing with each other. 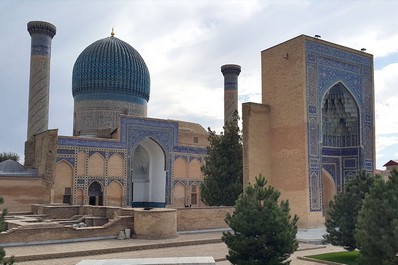 In 1363 a military conqueror Amir Timur seized Samarkand, which later became the capital of his vast empire. In 1370 Timur was declared the supreme ruler of Mawarannahr. In 1388 Amir Timur destroyed Urgench city, a major point on the Silk Road, and then the capital of the Golden Horde, Sarai Berke. Now all the caravan routes passed through Mawarannahr cities: Otrar (south Kazakhstan), Balkh, Tashkent, Herat, Sultan (Iran). In the Middle Ages the capital of Amir Timur, Samarkand, was deemed to be the most beautiful city on the Earth. The best architects created more and more new masterpieces of architecture: palaces, mosques, mausoleums, which still amaze with beauty and size. In the second half of 14th century, Timur started military campaigns against other states, subduing a huge area: from the Black Sea to the Ganges River and from the Aral Sea to the Arabian Sea.

After his death in 1405 the state became to split. Amir Timur’s son, Shahrukh, managed to preserve Chorasan, Afghanistan and Mawarannahr. He made his capital in Herat, and Samarkand was ruled by his son Ulugbek. In 1447 after the death of Shahrukh, Ulugbek became the head of the ruling dynasty, but in 1449 he was insidiously killed by his son Abdulatif. Timurids Dynasty with its rulers Shahrukh, Ulugbek and Babur, was marked by the development of arts, crafts, trade and flourishing of literature and sciences. 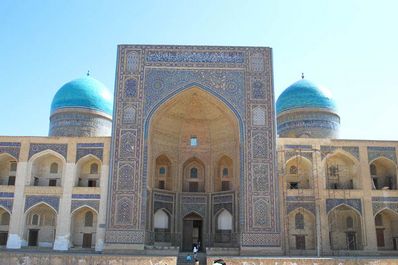 In 1499 the territory of Mawarannahr was invaded by new conquerors, the nomadic tribes Dasht-i-Kipchak. The head of the tribe Muhammad Shaybani Khan won Samarkand in 1500-1501 and founded a new state, which included Mawarannahr, Chorasan and Khorezm, and later other lands. Shaybanid Dynasty had been ruling almost a century and turned Central Asia into an arena of bloody wars. In a series of civil wars for the throne all members of the Shaybanid clan were killed. In 1599 Ashtarkhanids came to the power. Under Ashtarkhanids the centralized state was divided into three separate states: Bukhara Emirate, Kokand and Khiva Khanate. 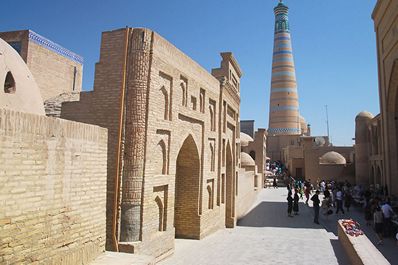 Formation of Khorezm as an independent state is related with Ilbars Khan (1511-1525), a descendant of Jochi. In the beginning of the 16th century the state was ruled by khans from Dasht-i-Kipchak tribes. Khorezm became an independent state and was called Khiva Khanate. It flourished under Abdulgazi Khan.

From the middle of the 18th century Bukhara was under the Manghit Dynasty. Muhammad Rakhim-Biy became the ruler of the Bukhara Khanate. He was called an emir, and since that time the state was called the Emirate of Bukhara. History of the Emirate of Bukhara is the story of constant civil wars and conflicts, which influenced on the economic and cultural life of the country.

The separation of Kokand (1709) from the Bukhara Khanate was promoted by the compactness of the territory and developed economic independence of the Fergana Valley. The Kokand Khanate included North Fergana from Namangan to Pansadgazi. Shakhrukh-biy from the tribe Ming (“Thousand’) was declared the first ruler of Fergana in 1710. Three independent states, appeared in Central Asia during the Middle Ages, were closely related with each other. Political events of one khanate infringed interests of other khanates.

Central Asian khanates in the middle of the 19th century were typical feudal states. Social order had features of settled people as well as nomadic and seminomadic tribes. It was particularly typical for the Khiva Khanate.