The age of this Zoroastrian ancient monument - dakhma Chilpyk (Shylpyk, Chilpak Kala) is more than 2200 years. Chilpyk is a round roofless tower, 15 meters high and 65 meters in diameter, built at the top of the rounded natural hill, 43 km away from Nukus. The Zoroastrians used it for burial of the dead. The remains of the deceased were thrown in the tower to the birds of prey. Later the bones were collected in earthenware vessels-ossuaries and dug into the ground. This way of disposal was connected with the Zoroastrian philosophy, which prohibited defiling the land with corrupted bodies.

Originally the tower had a 20-meter stair with steps cut right in the hill. From the base of the tower there was a passage leading to the river. Around the tower and inside it there were found ossuaries of clay and stone, some of them are displayed today in the museums of Nukus and Tashkent. 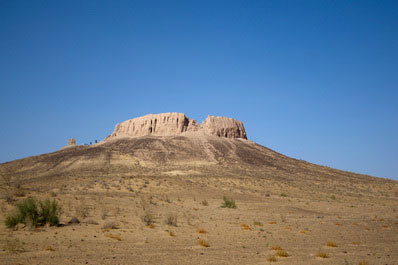 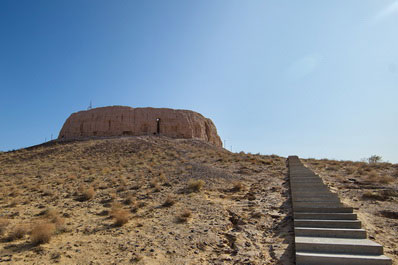 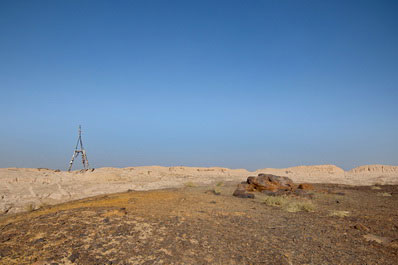 With the advent of the Arabs to these lands (the VII century) the tower was rebuilt for the first time, then during the heyday of ancient Khorezm (the IX-X centuries) again. Some researchers believe that the Khorezmians used Chilpyk as a signal and defense tower along with other fortresses of the Khorezm Shakh State. Chilpyk is one of the bright landmarks of Karakalpakstan - it is even depicted on the coat of arms of the Republic.

It is better to visit Chilpyk early in the morning until the sun bakes. The fortress offers an excellent view of the surroundings: the full-flowing Amu Darya, sparkling and shimmering in the sun, and surrounded by green fields and gardens, as well as immediately adjacent, wasteland dried under the sun and covered with spots of green and reddish shrubs and salt marshes. Chilpyk has a tripod installed to mark the highest point of the countryside; it is fully covered with ribbons of fabric- the locals tied them for luck and happiness.