The time of foundation of the Janbas-Kala settlement dates from the antique period of the history of Ancient Khorezm, so-called the period of the existence of “thousands cities” in the region territory. This period is divided into two stages: Kanguy and Kushan ones (by name of the states to which Khorezm belonged). Foundation of the Janbas-Kala fortress dates back to the first Kanguy stage. The date of the fortress foundation was determined by S.P. Tolstov - IV century before Christ - I century Anno Domini.

Janbas-Kala, a fortress of the “The Lands of Ancient Irrigation” is most protruded one to the north-east. It is situated on the northern-western slope of the desert flat elevation which extends from the north-west to the south-east, locking a chain of hills stretching to the south-east from Sultanuizdag (S.P. Tolstov “Ancient Khorezm”, page 87). 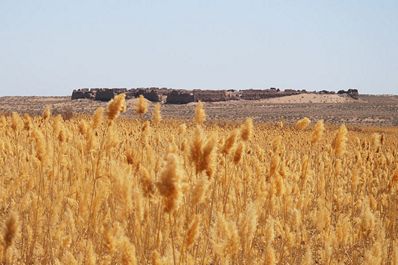 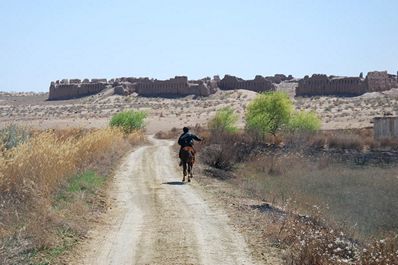 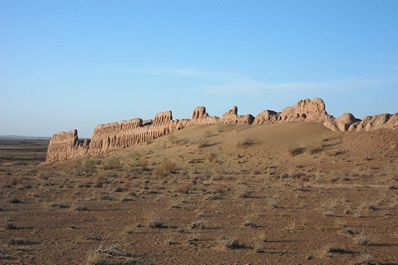 The Fortress represents a rather regular triangle, oriented to the cardinal directions. Its sizes are 200*170 m. A relative preservation of the Fortress can be explained by the fact that over many centuries the Fortress walls were covered with sand-drifts which contributed in a certain way to the building façade remained preserved.

The Janbas-Kala walls are almost 10m high indicating the immensity of the building. Behind the outer wall there was another wall as though backing up the main one, built certainly to strengthen a defensive fortification of the Fortress. The outer wall thickening to the bottom is as wide as 1.30m and the inner one – 1m. The narrow embrasures in the Janbas-Kala outer walls also indicate its military function.

The inner arrangement of the Fortress represents rather an ordinary construction. From the gates in the direction from north-west to south-east there was a main (and possibly the one) city street stretching till a large building located at the southern gates. Residential buildings-blocks were located along the both sides of the street. Every such block was divided into rooms. There were about 150 rooms per block. 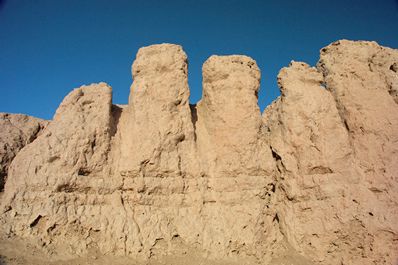 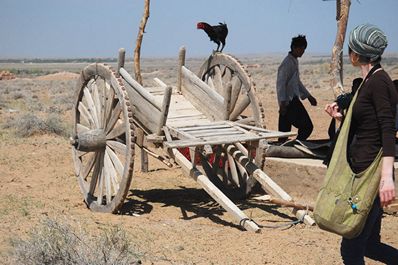 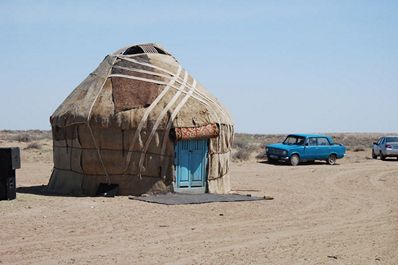 As far as the building at the southern gates concerns, the archeologists believe that it was a sanctuary for fire-worshippers, so-called “The House of Fire”. The building was located at the height of 4.5 m. A vivid evidence of this theory is the residue of ash found by the archeologists in the ruins of a corner room of the sanctuary.

Over several centuries the residents of the Janbas-Kala fortress were rebuffing nomads incursions. However in the I century AD after an ineffectual assault of the catchy fortress gates, new invaders using a battering-ram broke the wall a little bit to the west of the gate. A battle started inside the fortress, this fact was certified by arrow heads found by archeologists. Probably the majority of the residents were killed in the battle, and those who survived were taken captive. After that the fortress was not renovated, it had been gradually destroying by rains and winds for 2,000 years. Today only massive walls remained from its bygone grandeur.