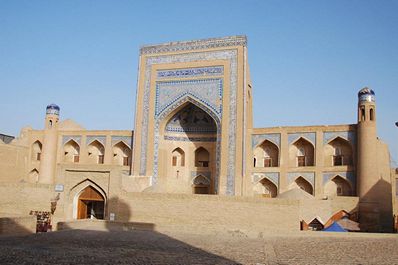 Madrassah of Allakuli Khan was built in the middle of the XIX century. It is considered the richest monument in its decoration. Majolica of Khorezmian type in black, white and blue colors prevails here, images in black contours is in the tambourines and framed double arcade of columns and three-quarters of the portal.

Madrasah has a name of an initiator of its construction, the Khiva ruler Allakuli Khan. In several khujdras on the first floor there was the city library founded by Allakuli Khan. The library provide books for all students of Khiva Madrasah.