This almost a modern complex dates back to the beginning of the XX century. It includes a minaret and a mosque. The complex is called in honour of Islam Khoja, Prime Minister of Isfandiar Khan. Islam Khoja minaret called the symbol of Khiva.

It is narrowed upwards, which dates back to the earliest examples of the architecture of the XIV century. The brickwork alternates with bands of glazed patterns on the minaret. The height of the minaret 56.6 meters, diameter of the fundament is 9.5 at the base. 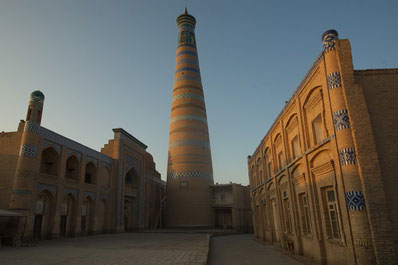 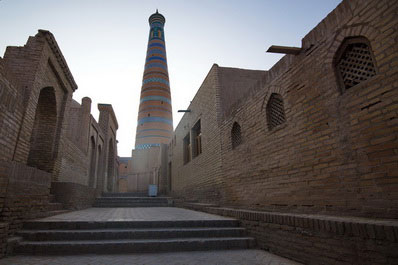 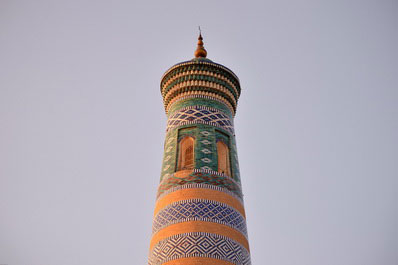 Islam Khoja Madrasah is located behind the minaret. It consists of 42 hujras and a large domed hall. Skills of builders are shown in contrast combinations of architectural forms that skillfully used in a limited space. Mihrab niche is decorated with majolica and ganch. The facade is decorated with glaze.

Islam Khoja minaret, built near the madrasah is the highest structure in Khiva, and has become its symbol. The minaret is 44 m. high; the diameter on the foundation is about 10 m. The shaft of the minaret diminishes in its diameter as it rises, and produces an unusual impression.

Decorative belts of blue and white ceramics alternating with ochre bricks adorn the minaret. It is topped by arched lantern and golden crown.

The minaret dominates its part of the city and concentrates around it thousand of domes and vaulted constructions. The different sizes of the buildings as they approach the minaret of Islam Khoja contrast with its mass, showing off the skill of town planning of the Khorezm architects.