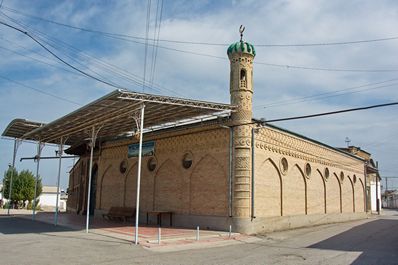 Chakar mosque was built on the site of an old, dilapidated buildings of the cult. Only summer part has been preserved from the building, representing closed on three sides aivan with columns. The ceiling has peculiar painting and dissected into rectangular ceiling beams, each of which contains images of original vases with bouquets of flowers on a green or red background. The high decorative cornice of aivan is covered with floral design - shamrocks with red flowers. The delicate combination of colors and decorative compositions plafonds are an example of applied arts of craftsmen of Fergana.

Toron-bazar mosque was built in the late XIX century near the city market. It has a modest decor. In 1936, the mosque was restored and converted into a house of dehkan.