The Said Akhmad-Khoja Madrasah was built at the end of the XIX century. This is one of the “youngest” Margilan monuments, aged a little more than 200 years. The madrasah boasts harmony of the composition, proportionality of the elements and rational design of the building. The basis of the complex is the madrasah itself and a mosque, consisting of a hall and ayvan with painted ceilings.

The Said Akhmad-Khoja Madrasah does not feature traditional architecture: its design rather combines both oriental and European styles. Thus, its square yard with rows of lancet arches along the perimeter is occupied by the mosque, and surrounded by khujdras – a typical plan for eastern architecture of that kind of buildings. The madrasah was built of brick, but with the local seismic conditions in view, the masters reinforced the walls of the mosque in European style – by two-lane wooden frame, which visually expanded the room interior space. 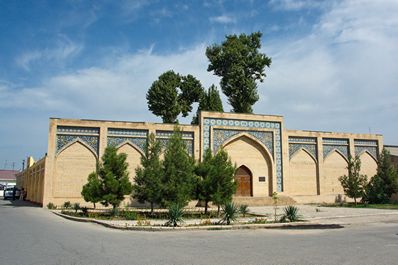 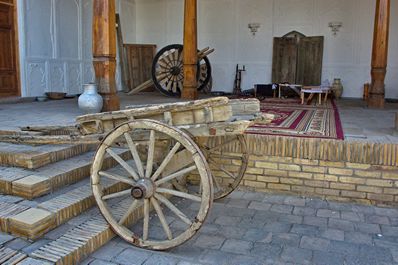 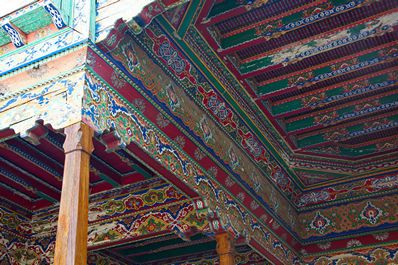 The ceiling of the hall was painted in broad red and green stripes, with flowers and curling shoots applied on them. The interior walls are separated with elegant geometric ganch ornament on rectangular panels with a mihrab niche arranged in their plane.

In 2007, the Said Akhmad-Khoja Madrasah was reconstructed; the complex was added with a broad road and a garden around it. Old sycamores with spreading crowns and wide ditch running through the madrasah courtyard make shadow and shade in hot days.

The Said Akhmad-Khoja Madrasah is still functional; the believers study the Koran and Hadith there. Its 26 hujras, where the madrasah students used to live two centuries ago, are occupied now by workshops of local artisans, engaged in weaving, gold embroidery, wood carving and embossing.