There are ruins of medieval monument of the Karakhanid epoch known under name Rabat-i-Malik in the Golodnaya steppe, few kilometers from Navoi city. The only part of it that survived up to date are its foundation and its entrance portal which bear an ancient inscription engraved by unknown masters “the monument is erected by Sultan of the World and this ruinous place (Malik Steppe territory) became well-furnished…”. By the end of the XIX century the local residents forgot the monument history and they called the survived entrance portal as the Bukhara Gates.

This monument was first outspoken of in the mid-XIX century, when 27-year-old natural scientist by name A. Leman during the Bukhara mission headed by N. Butenyev in 1841-42, took its sketches and also described its courtyard which did not preserve largely by the XX century. 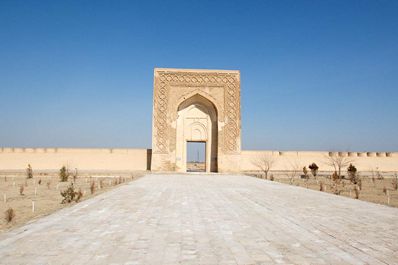 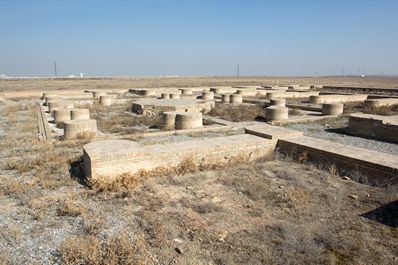 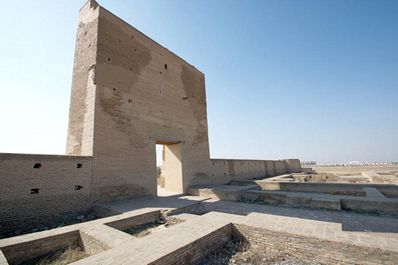 The dig of Rabat-i-Malik revealed two yards, a gallery, small mosque and bath house. All the apartments were richly finished and decorated with ganch and carved non-glazed terracotta. Various ceramic items were found among the ruins: jugs, tagora, khums, pans, flasks, kettles, narrow-necked decanters. Besides, the ruins of two valla, surrounded the monuments were found, which confirm the protective functions of Rabat-i-Malik. The walls around Rabat-i-Malik were almost 1,70-1,80-m wide.

Rabat-i-Malik is an only memorable palace of the Karakhanid epoch survived up today. There is no analogous monuments which can give us an example of every-day life of the Karakhanid rulers in the territory of Central Asia. By this day Rabat-i-Malik is removed from service, but is opened for touristic visits. The ruins of the building leave an indelible impression. Over the last several years restoration works were carried out there, the entrance portal and also parts of the walls adjacent to it were renewed. Now, one can already get an idea of how the monument looked in the XII century under the Karakhanids.

Rabat-i-Malik is a multi-functional monument. It is a summer place of the Karakhanids and securely fortified fortress able to resist a siege. In later periods after dissolution of the Karakhanid state, Timur and then representatives of the Shaybanid dynasty stopped over at this place on their way. 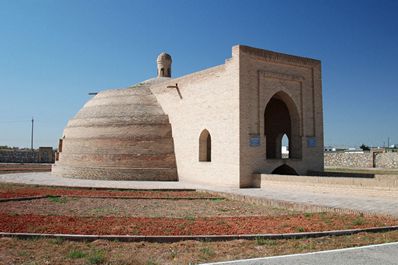 Not far from Rabat-i-Malik there is a giant tank named Sardoba Malik. This is a 13-m storage with a reservoir was built in the XI century specially to supply Rabat-i-Malik with water. Water to the tank was fed by the Zaravshan River through an underground canal and was kept there for the whole summer. The water there was clean and cold owing to a 12-m dome, protecting it from sun heat. The climbdown to the sardoba is located at the entry. Located on the caravan route, Sardoba Malik was a source of potable water for passing travelers and caravans.