Akmal Nur. The Dervish in Love

Akmal Nur (Nuriddinov) one of the best-known artists of Uzbekistan during his 35–year-old career has won his spurs both in Uzbekistan and abroad.

He was born in 1959 in Namangan city (Uzbekistan). Having graduated from the Republican Art School named after P. Benkov in 1978 and the Tashkent State Institute of Arts named after M. Uygur in 1984 he started his work mastering his artistry in the best Tashkent arts studios. In 1997 Akmal Nur became an academician, active member of the Academy of Arts of Uzbekistan. And in 2003 he was awarded the title of People’s Artist of Uzbekistan.

Actually, the artist needs no regalia and awards. “Only in search, we comprehend the whole raison d'etre of our life journey”, Akmal Nur is convinced. Akmal Nur tells about his career in the exclusive interview to Advantour.com.

- «Once a dervish was asked what he was looking for, roaming in the world so long, what he was trying to find? “Me, myself, something what is destined to us”, he answered. Akmal Vakhabjanovich, tell, please, if this phrase finds its reflection in your creative work?

- I am spending all my life in search of myself and these pursuits generate my works. Generally speaking, I believe that every creative person should be in search. Unfortunately, at times, we are rather splitting hairs in each other instead.

- What are you working at now?

I have finished one work most recently. It depicts a couple expecting a baby. They are depicted as an organic whole and there is a pomegranate growing inside their womb, because the pomegranate is a symbol of family and fertility. The sun-lepeshka is shining from the right. The lepeshka, the bread is a symbol of the sun and God's grace. The baby birth is a bright event preceded by the history of its parents’ relations, and the baby itself is given by God. I made an attempt to express it in my picture, which has no name yet.

Now I am working at the picture, depicting a woman with a child. This woman is pure and innocent like an angel. She is imploring God, but what exactly about? She asks for Dei Gratia to deliver the child, healthy and gifted. And the surahs from the Koran written in the picture are expressing this.

- Your work constantly sounds with love subject. It is not accidentally, is it?

- Love can be spoken about infinitely. Any creator should always be in love. As Al Arabi says: “Wherever you are, in any environment you found yourself, keep yourself in the state of love”. As an artist I am looking for God in a female image. For example, I never take portraits, but I always try to have a look deeper insight the image to be created. The exact exterior details and features are not important for me. All these may be delivered by a photographic camera. I need to express my perception. God has created the world so perfect, that trying to repeat it exactly, seems stupid to me. 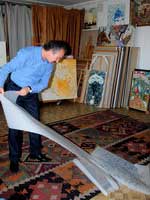 - Every artist has his own certain secret symbolic in works, which his hand is recognized by. Please, share your secret of symbols with us.

- Symbols in my pictures are coming by intuition, not as such, but having their basis. Thus, in the East, the bread is a symbol of God’s grace and the main attribute of food, an apple is a forbidden fruit, you may see this symbol in some of my works, and the fish is a symbol of purity. The picture “The World in Me”, for example, depicts a fish, more exactly a fish silhouette, confining a young girl; this picture symbolizes beauty and purity for me.

- I see dreams very seldom, but even in my rare dreams there is a woman who is always present. Once in my sleep I saw an image of a beautiful woman, and then I wrote a picture: a woman was laying, naked, and a white bird flying by. The name of the picture is “Tushlarimdan Utgan Kush” (“The Bird Flying Over in my Dream”).

Perhaps it illustrates the legend about the dervish, every person is looking for himself, for his God, and some people see God in a female image.

Perhaps, this is the case with me. If studying my works, it can be seen that all of them are devoted to love and relations between a man and a woman, their first meeting, wedding ceremonies, expecting a baby, birth of a new man. The whole human life is built by the laws of nature. A picture does not appear so simple, even if you are taking still life; it has to do with some feelings and emotions too.

- Who was your teacher, schoolmaster?

- I remember Sokolov Ivan Yakovlevich with thanks; he is my first teacher in the Benkov School. Ibrokhim Mamadaliev, the master of traditional folk painting in Namangan was my teacher before him.

I came to Tashkent specially to receive training in traditional folk painting but when I filed my documents to National Painting Department, my pictures were shown to Kuzybaev Nigmat Mirzabayevich, the People’s artist of Uzbekistan, academician . He asked me: “Why do you submit your documents to this Department? “I want to learn folk painting”, I answered. He said “No, you should take up pictorial art”. I tried to refuse, but he practically made me apply to Pictorial Art Department. This is how I became an artist. After the School I entered to Art Institute.

In the beginning of my career I was carried away with work of Sandro Botticelli, Rafael and later on that of Henri Matisse, I was enthusiastic very much with Gauguin. But in course of time the approach to work and art changes and I took interest in René Magritte, I still like his philosophical attitude towards life and if to speak about the classics – this is Pieter Bruegel.

- Do you often go abroad? What country does impress you most?

- I do not go often abroad. I remember especially a trip to Venice. At that time Venice seemed to me to have the name of a beautiful girl. I was writing the picture devoted to Venice almost a year. The main Venice channel I depicted in a form of a female silhouette. I saw it this way.

When I was Director of the National Gallery of Uzbekistan I visited Rome, Florence. At that period I was busy with practical arrangements in connection with construction of the Galley building. I visited Italy several times to study this matter from all aspects.

Speaking of the eastern countries I was most inspired by India and Morocco. In 1992 I visited India and created a whole series of works dedicated to this country. By the way, it was India from which I came back as Akmal Nur. Before this I was Akmal Nuriddinov.

An art-critic happened to come round to my personal exhibition in the ART Heritage Gallery in India. He together with his wife came to the inauguration of the exhibition. They also visited other exhibitions and then they decided to make acquaintance with me. We sat down and fell into talk. He began asking me “Why is your surname Nuriddinov? According to oriental rule your name should sound like Akmal Nuriddin or Akmal Nur. There are religion and light in your works that is why I think you should be Akmal Nur. Your creative work unites all these”. I was thinking about it. In fact, I had a lot of religious works. And from1992 I began to sign my pictures as Akmal Nur.

Of course, Morocco made a great influence on my creative work. I produced a considerable series of Moroccan pictures. But India inspired me most of all, it is so bright and sunny. I think that after India my picture acquired a facture. In my perception, India looks like large gems. An artist must go to such places. Why did Paul Gauguin, Henri Matisse lived in the East in due time? They were getting inspiration there.

- And where are you deriving your inspiration?

- Only here in Uzbekistan. I came from Namangan. The people and language are special there, and they are dressed differently. It was there, where I started creating the images of women in white kerchiefs. For me, white kerchief is a symbol of purity.

Until recently, I lived in a shell, in my own world. This world is very pure and the real life also seemed the same to me, but it turned out that it was far from being like this. The world in me does not absolutely coincide with the external world. There are other values and other requirements there, the people communicate differently, speak differently, they tell one thing and think another and do the third…

- The world is imperfect. But the great labor yields the great fruits, doesn’t it? For example your contribution to the development of fines arts will always be appreciated...

- Almost half a year ago I became Chairperson of the Academy of Arts of Uzbekistan. This position of responsibility takes me much time and requires much attention, significant moral and physical devotion, which means, that less time is left for creativity and ordinary rest.

At the same time, I would like to note that we have a good school of painting here in Uzbekistan. This fact is recognized not only in our country but also throughout the world. Nowadays we are orienting to the European art school but we have to establish our national Uzbek school. The sources of the oriental painting school date back to deep antiquity. For a certain period we lost contact with the sources and began orienting to the European academic school. As Chairperson of the Academy of Arts, I am fighting for revival of the oriental school of Fine Art, which will give Uzbek artists the possibility to receive academic knowledge in the field of restoration of ancient oriental traditions.