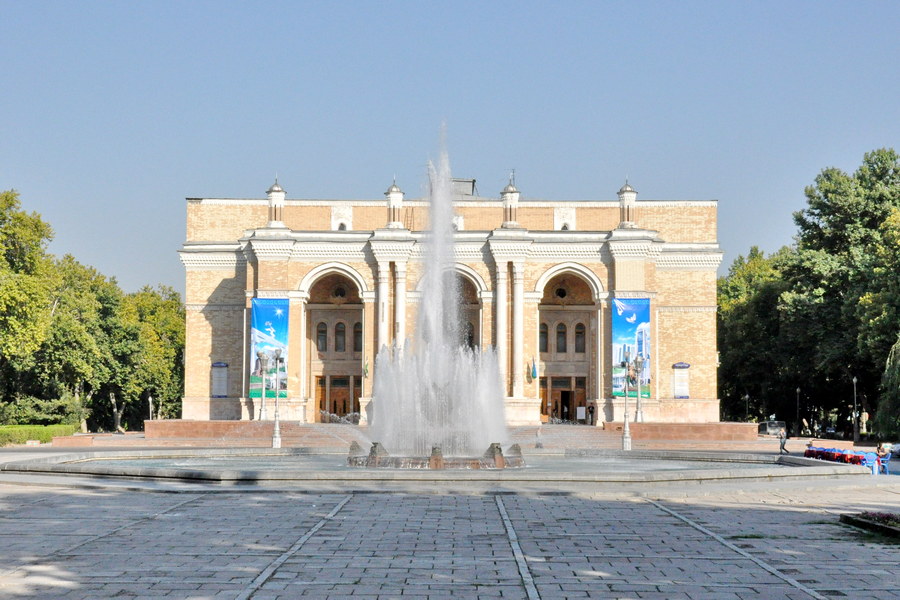 The history of the theatre started in 1929, when amateurs of concert-ethnographic group began to work under the leadership of M. Kari-Yakubov and founded the professional theatre. In 1939 it was renamed to the Uzbek State Opera and Ballet Theatre, and in March of 1948 it was united with Russian theatre and called as the State Opera and Ballet Theatre named after Alisher Navoiy. Later, in 1959 the theatre obtained the status of Academic theatre and in 1966 – the status of Bolshoi Theatre.

The unique building was built by the project of academician-architect V.A.Schusev. Each of six side foyers of the theatre has the feature of architectural décor, inherent to this or that region of Uzbekistan (Tashkent hall, Bukhara hall, Khorezm hall, Samarkand hall, Ferghana hall, and Termez hall). For example the Bukhara hall is decorated with ganch carving, applied on mirror surface as in the palace of Bukharan emir. Halls and foyer of the theatre are decorated with mural painting of scenes from poems by A.Navoi and of landscapes of Uzbekistan.The repertoire of the theatre mainly consists of staging of world classic. And also various concerts and tours of foreign artists are held here. 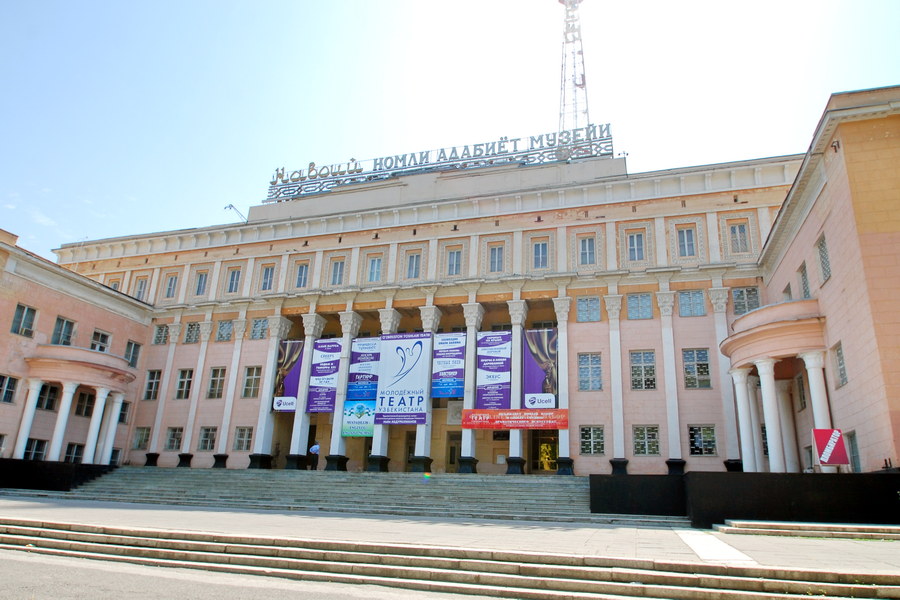 The history of Youth Theatre of Uzbekistan (the former Theatre of Young Spectator) began in 1928 when the doctor S. Etien and the artist S. Malt decided to create the theatre and with the group of enthusiasts performed the play “Uncle Tom's Cabin” by motifs of famous novel by Harriet Beechet Stowe.

Today the repertoire of the theatre offers plays: - for young spectators: “Three Little Pigs”, “Terem-shok”, “Adventures of Funtik”, “Cat’s house” - for school children: “Cinderella”, “Fire Stricker”, “Thumbelina”, “Cherry Red Flower”, “The Gift to Beloved Princess” - and for adults: “The Fiddler on the Roof”, “Ecvus”, “Tartuffe”, “Creeps” and other.

The Youth Theatre of Uzbekistan represents our country in numerous international festivals and forums in various countries of the world. 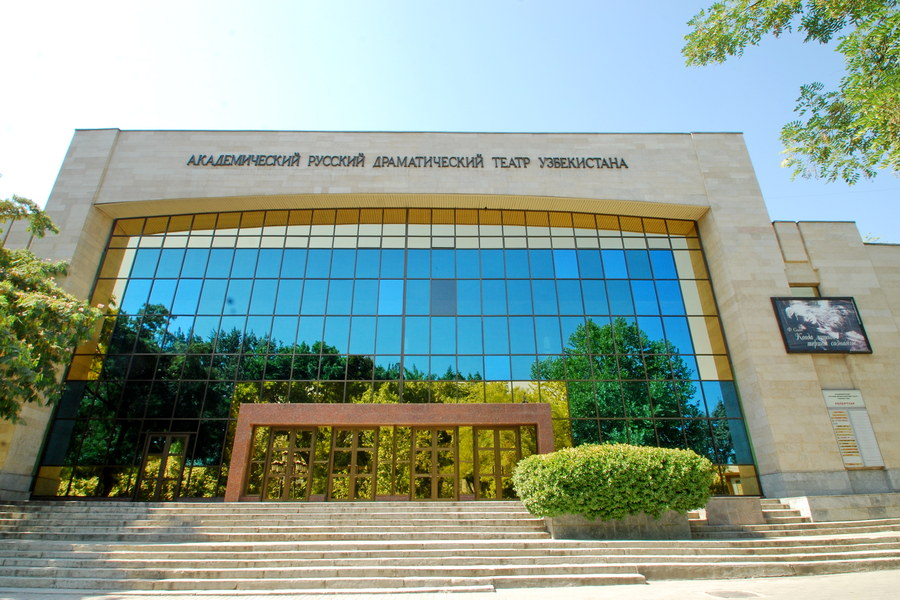 Academic Russian Drama Theatre of Uzbekistan was founded in 1934 by Vasiliy Chirkin and Michail Vulkonskiy. They invited to the theatre troupe such famous actors of their time as A. Zagarova, E. Lenina, A. Shestakov, N. Firsov, L. Petrova, G. Zagurskaya, O. Andreeva and others.

The repertoire of Russian Drama Theatre was based on works of modern playwrights. Most plays of this Tashkent theatre became the “golden fund’ of achievements of theatrical art of 1930-1950. These are “Boris Godunov”, “Peter I”, “Masquerade”, “Three sisters”, "Wit Works Woe", “In a Busy Place”, “Summer Residents”. In 1967 the theatre obtained the status of Academic theatre. In 1990 the leader of the theatre became Vladimir Shapiro, who produced more than 45 performances and is the creative director of this theatre up till now.

Today the group of actors consists of such famous actors as V. Verjbidskiy, I. Avdyushkina, A. Dubrovin, O. Volodina, N. Ivanov, L. Mikhailova and others. The repertoire of the theatre offers various plays of modern foreign and Russian playwrights. 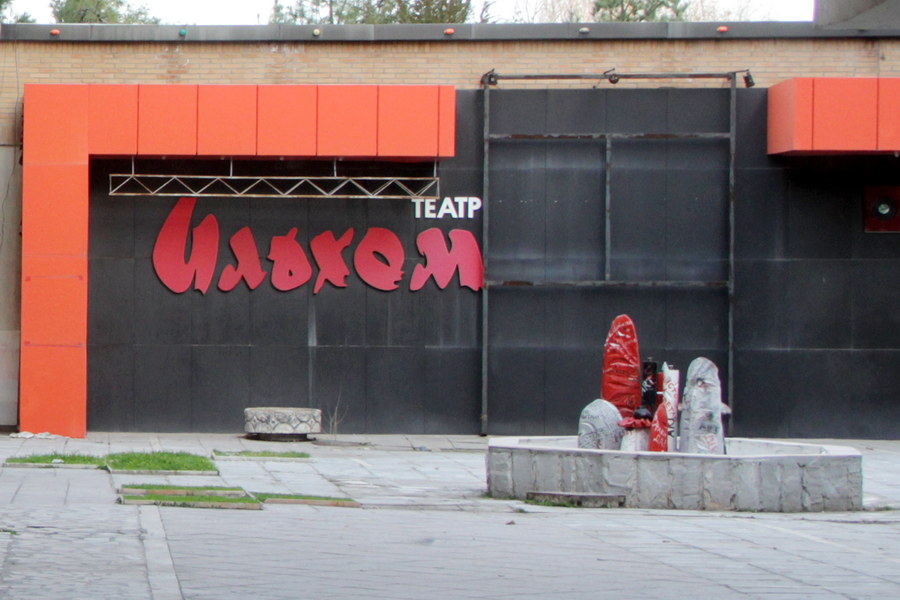 The Theatre "Ilkhom" is the professional non-state theatre of Uzbekistan. The theatre was founded in 1976 by the director Mark Weil and a part of the group of Tashkent Theatre Institute graduates. Initially the theatre had the name of ESTY the "Ilkhom" (Experimental Studio of Theatrical Youth-actors, artists, musicians, theatricals). Theatre team did plays based on works of modern and young playwrights of Vampilov, Zlotnikov, Bashkbekov, Guseynov, Razumovskaya. Plays of the theatre outstripped time. Thus after the period of Perestroyka, when other theatres obtained the freedom, "Ilkhom" lost interest in traditional plays and sank into the miming theatre. From 1989 this Tashkent theatre was called, simply, The "Ilkhom" Theatre. It was the year of founding of its own drama school at the theatre. The graduation project of the 1st studio became the fantasy play based on C. Gozzi’s «Happy Beggars», where director of the play could assimilate the traditions of dell’arte comedy with traditional national Uzbek comedy «Maskhoroboz». This play is still popular among spectators even today.

The repertoire of "Ilkhom" theatre is notable for the width of range: plays of this theatre never leave their spectators to be indifferent. All plays are distinguished with its non-triviality. ILKHOM is the little Tashkent theatre, and the division between the stage and auditorium is quite relative. In some plays the auditorium becomes the place of action and audience turns into immediate participants of the show. So in the Aeschylus’ drama of “Orestaya” an audience acts as the jury and decides “whether to execute or to give the pardon”. In addition “ILKHOM” holds various exhibitions, concerts and festivals. The theatre with great success took part in many international theatre festivals in the United States, Norway, Denmark, Poland, Germany, France, Russia, Lithuania, Israel, Japan and other countries of the world.

Unfortunately the high-minded inspirer, director and creative director of the theatre Mark Weil was killed on September 07, 2007. But his deed goes on living and the theatre team does everything that to preserve the priceless cultural heritage, left by the Master.