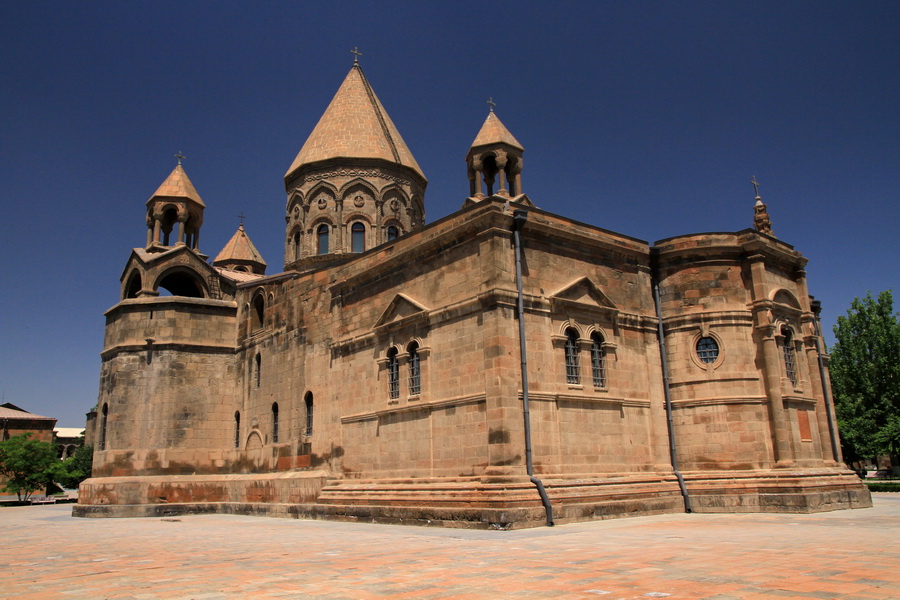 One of the main attractions of the Echmiadzin is the Cathedral — the oldest Christian temple in Armenia, and one of the first in entire world. The first stone of the temple, as the legend goes, was laid in 30 CE by the first Catholicos of the Armenian Church.

The main Armenian temple's construction, which began in the 4th century, continued for a long time. The cathedral was built in several parts, with the additions like extra naves and frescoes being built on top of older parts. Some of the crosses carved in the 5th century are still visible in the walls.

The interior decoration of the Cathedral was finished in the 18th century, and is an impressive example of Byzantine luxury and various floral ornaments of orange-red and blue-lilac shades. The frescoes are more recent, done by Armenian artisans were were taken by Shah Abbas to Esfahan. Besides the ornaments and other decorations, the artist painted various scenes based on the Holy Scriptures, and more than 120 portraits with the images of saints and apostles. During the following years many frescos were destroyed. In the 20th century thorough restoration was carried out. The columns and the arches supporting the dome were reinforced and the dome itself was jacketed with lead. The new marble altar was constructed. Marble was also used for the church floor. The old frescoes inside the temple were renovated and new ones added. A number of khachkars were installed in the niches.

The distinguishing feature of the cathedral is that here are three more altars besides the main one. Two of them are located in the northern and southern niches. The other is in the center and marks the holy site where Christ descended and ordered St. Gregory the Illuminator to build the temple on that particular place.

In 2001 when Armenia celebrated the 1700 th anniversary of adoption of Christianity, Pope John Paul II brought the relics of the first Armenian Catholicos there. For five hundred years, the relics of St. Gregory the Illuminator had been kept in Naples, but now are in the Cathedral of Etchmiadzin.