Echmiadzin boasts by three more ancient monuments. According to the legend these temples were erected in the honor of the martyrs - the first Christian women who escaped from prosecutions of the Roman Emperor. The temples of St. Hripsime, St. Gayane and St. Shogakat were built on the places where the holy maidens were executed. 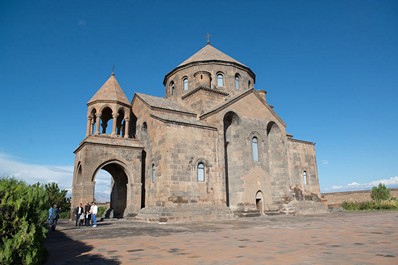 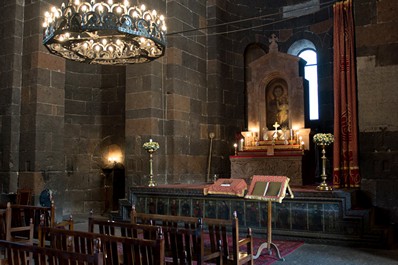 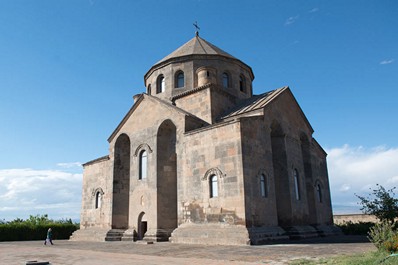 The stories of these three martyrs are familiar to every Armenian. In 301 33 Christian women from Cappadocia (historical territory of Georgia ) were hiding in Armenia from the prosecution of Romans. Among them was beautiful Hripsime who escaped accompanied by an elderly hegumenness named Gayane. Tsar Trdat struck by the girl's beauty proposed to her but enraged by her refusal ordered to torture her, Gayane and all the nuns. Their bodies were fed to wild animals afterwards. After the execution he fell seriously sick. It was St. Gregory the Illuminator who helped him. He buried the remains of the maidens and cured the tsar. The grateful Trdat adopted Christianity and ordered to build temples on the execution places.

The St. Hripsime Temple was constructed in 618 and is the masterpiece of early Christian architecture. This harmonious majestic structure is beautiful in its simplicity. The four semicircular niches form a cross on the rectangular basis of the temple. Under the altar there is a crypt where according to the legend Hripsime was buried. The decoration of the building is very modest. In 1790 the two-level belfry was attached to the temple. The temple stores the magnificent patronal gate of 1741 encrusted by nacre. St. Hripsime temple is a popular place for wedding ceremonies.