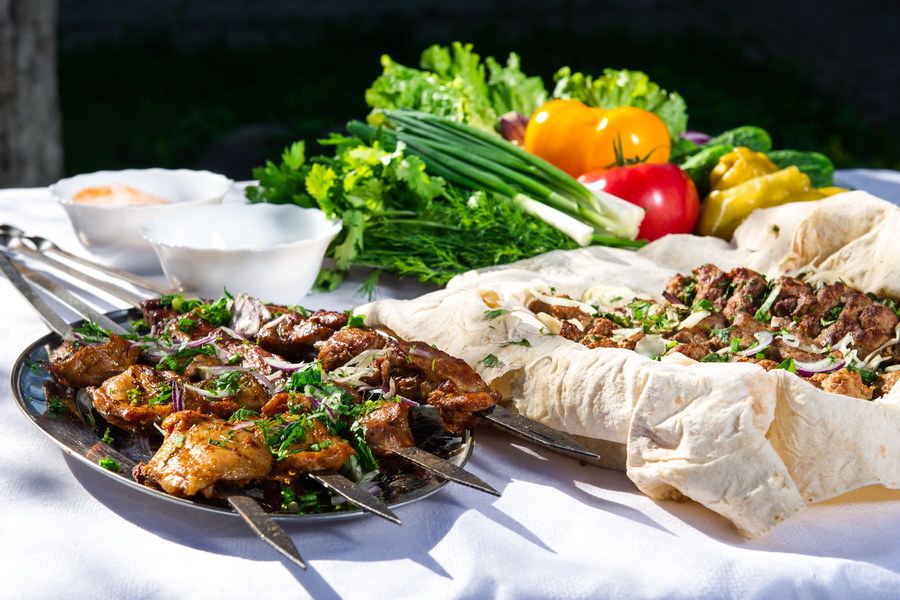 Armenian food consists of many ancient recipes reflective of the people’s rich culture and traditional lifestyle. Most main dishes in Armenia involve meat: Juicy khorovats, tender dolma, rich kufta and other scrumptious meals are regularly found on the dinner table and at special gatherings.

Other key ingredients in Armenia include greens, dried fruits, fish and dairy products. Armenians are very fond of spices and add them to their dishes in every combination and amount to create one-of-a-kind tastes. Meals are always accompanied by fresh lavash bread, while Armenia’s famous brandy is served at every evening gathering.

Read on for a closer look at what is eaten in Armenia, including many dishes which have been a part of Armenian cuisine for centuries. 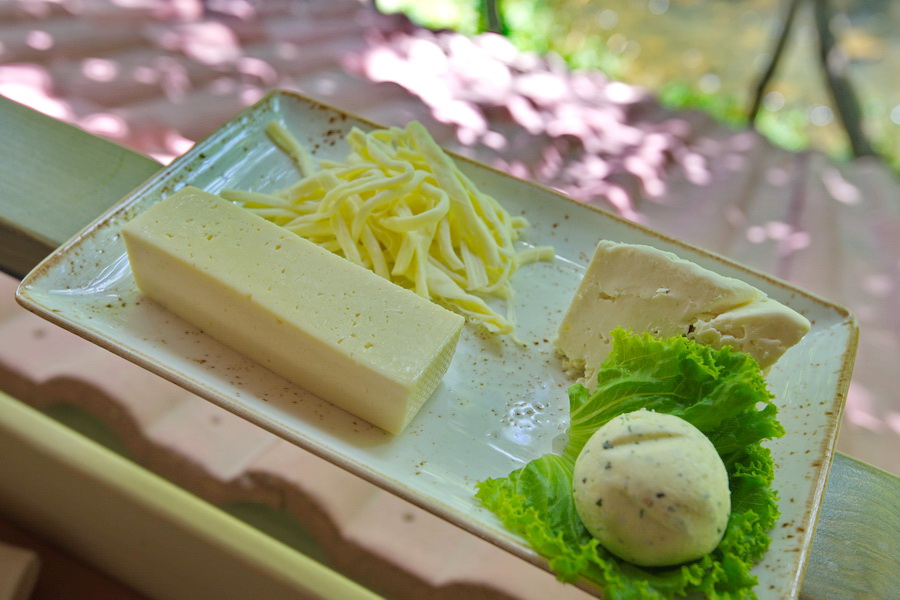 Armenian dairy products have always been central to the local diet. In Armenia you will discover a rich variety of cheeses that are made from different types of cow, goat and sheep’s milk. The pride of local cuisine, be sure to enjoy Armenian cheese and milk products while in country!

Try the soft and tender lori cheese made from natural pasteurized milk. Get to know the salty and slightly spicy chanakh cheese, often eaten with Armenia’s famous lavash. Pay attention to the uniquely soft motal cheese made with many finely chopped herbs.

From goat or sheep's milk comes the famous chechil, a cheese rope which surprises with its soft, stretchy texture. The rich and mildly salty taste of the delicate, feta-like white sheep's cheese is a great addition to any meal or light snack.

Perhaps the most famous Armenian dairy product is a thick kefir called matsun. This fermented drink has been consumed in Armenia for hundreds of years and is used in many dishes, including the wildly popular spas soup. In the heat of summer a soft drink made by diluting matsun with cold water is also enjoyed. 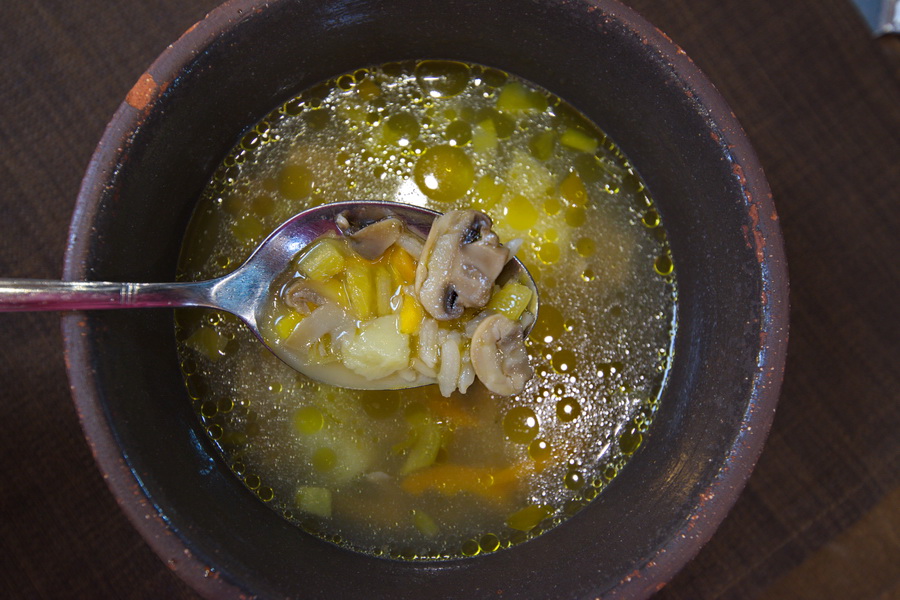 Armenian food includes many soups which can be prepared from seemingly any product: vegetables, meat, offal, herbs, legumes, dairy products, mushrooms, fruits, fish… A variety of spices are usually added to accentuate the natural flavor of the soups, which are known to make hearty and delicious first courses.

One of the most famous Armenian soups is khash, a filling dish prepared by boiling pork, lamb or beef legs in vegetable broth for several hours. Greasy and rich, it is customary to eat khash the morning after a night of partying, as it is widely believed to cure a hangover and restore the balance of sodium and water in the body.

Another equally famous Armenian soup is bozbash, a thick stew made from young lamb, vegetables and chickpeas. Cherry plums are often added to bozbash, giving the broth a slightly sour kick.

Another common soup is aveluk, a lentil sorrel soup. Cooked with lentils, nuts and flour, it is thick and incredibly filling. This soup is definitely worth trying while traveling in Armenia, for it is a symbol of local cuisine which every Armenian has fond memories of from childhood.

The sour-milk soup called spas is prepared with matsun, making it beneficial for the digestive system. Additional ingredients in spas include bulgur, egg and flour and the secret ingredient – flavorful fresh greens. In summer the soup is eaten cold and in winter hot, making it a popular option in any season. 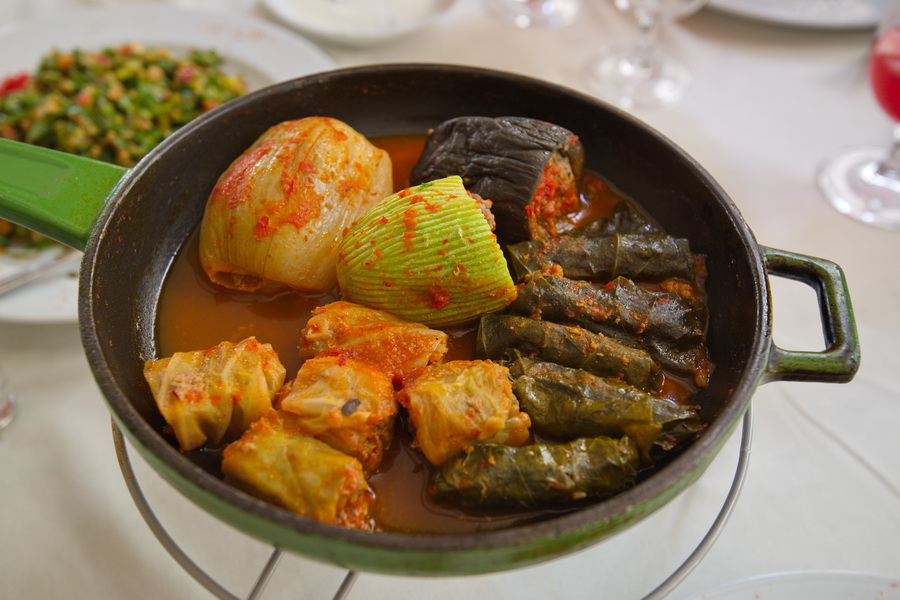 Armenian national food largely hinges on meat. Meat dishes in Armenia are prevalent throughout the country and take on many variations. There are soups with meat, main courses with meat and more than a dozen dishes in which meat is the main ingredient.

Khorovats are juicy, melt-in-your-mouth shish kebabs cooked on the grill. Kufta are tender, delicious cutlets. Try tzhvzhik (tjvjik), a unique mix of offal and vegetables flavored with spices. Taste boraki, original Armenian dumplings made by frying minced meat and wrapping it in layers of thinly rolled dough. Admire the aesthetics and unforgettable taste of amich, a unique pilaf baked inside a whole chicken.

In every region of the country you will be able to taste meat dishes prepared with love, skill and a respect for traditional Armenian recipes. 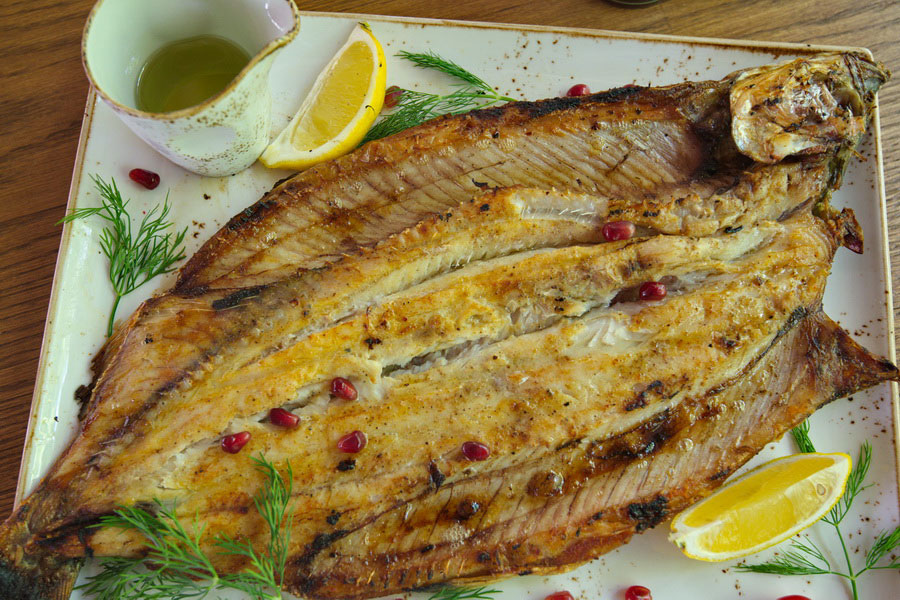 A common symbol of Armenia is Lake Sevan, whose waters are rich in numerous species of fish. Armenians have long honored Sevan and enjoyed its gifts with gratitude. Through the centuries Armenian households have prepared fish dishes according to recipes inherited from their ancestors. Delectable Armenian fish dishes remain prevalent in most local restaurants and at special gatherings even today.

The most popular fish in Armenia is ishkhan, a trout native to Lake Sevan whose name means “prince” in Armenian. Shish kebab prepared from ishkhan on a spit is called ishkhan khorovats. This fish is often poached in wine or in its own juice, which makes it especially juicy and tender. Another popular way of preparing ishkhan is to stew or fry it in oil and serve it wrapped in lavash bread.

In Armenia you can try a fish kebab prepared from catfish or other fatty fish. The boneless fillets are marinated, skewered and cooked over coals. As many Armenian families have their own secret recipe for fish kebab marinade, which usually includes a unique combination of spices, this dish will taste a little different each time you try it.

Do not pass up the chance to try Armenian fish dishes, as each one is a real delicacy! 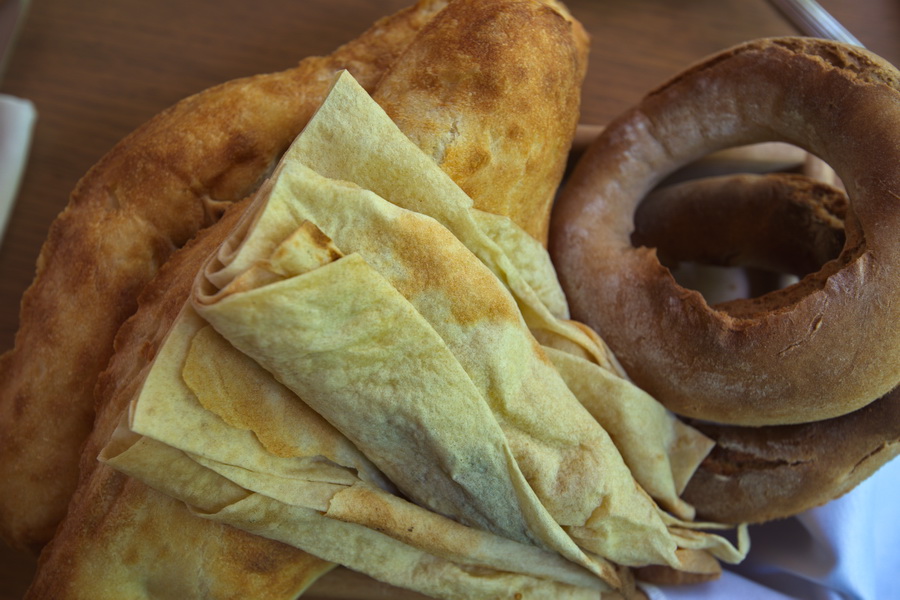 Armenian bread is synonymous with lavash, a traditional unleavened flatbread served at every meal. Lavash is more than food, for it also makes a great impromptu spoon or plate. Meat, vegetables and herbs are often wrapped in it, and Armenians traditionally use small pieces of lavash to spoon up foods which are smothered in thick sauce. Lavash is used to make everything from delicious stuffed rolls to quick snacks and Armenian street food. As it is impossible to imagine local cuisine without lavash, this easy-to-prepare but tasty bread is sure to be a staple in your diet while you travel the country.

Armenian pastries are baked in many different forms and are loved by many. Taste the delicate gata made from sugar, matsun and butter. Try the appetizing baburik with ground walnuts and cinnamon. Enjoy the taste of honey-drenched baklava. Taste crunchy Armenian cookies called nshablit, which are akin to crumbly macaroons. The recipes for these and many other national pastries have been passed down for generations, and no tea party is complete without these Armenian desserts. 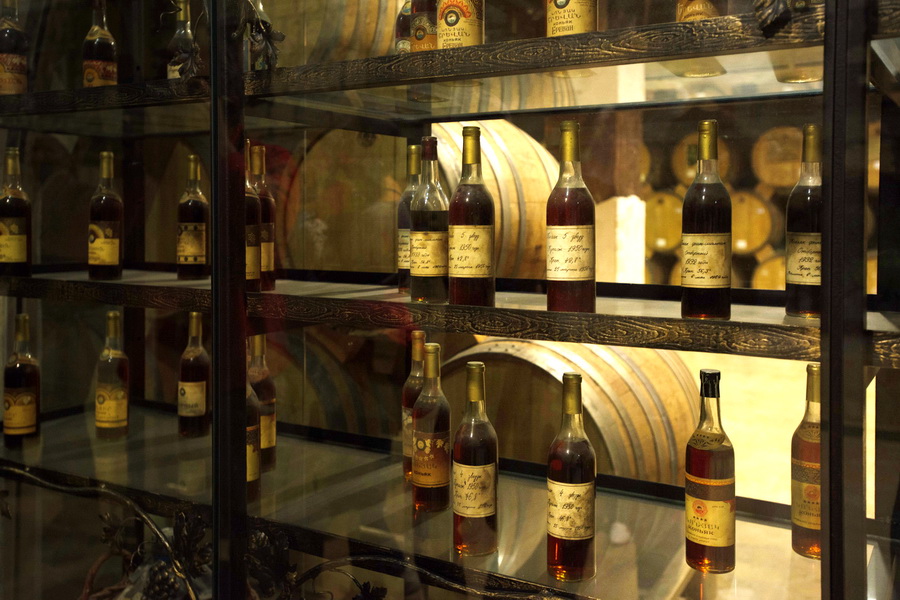 Food in Armenia should always be enjoyed with a beverage. Armenian drinks include several alcoholic and non-alcoholic options in which the whole country takes pride.

The well-known Armenian cognac (brandy) began winning awards at international exhibitions more than 120 years ago. You will come across this drink everywhere in Armenia, for no host will let their guests leave the table without offering them a glass or two of this excellent aged cognac.

High-class wines are also produced in the country. Since Armenian grapes have a high sugar content, the wines made from them are fortified. Another well-known Armenian alcoholic drink is Artsakh vodka, made from mulberries, grapes, cornelian cherries, plums, apricots and other fruits. Despite its strength, Artsakh is known for its mild taste and the absence of the smell of alcohol.

Among non-alcoholic beverages, Armenia is known for its mineral waters hailing from the mountain resort town of Jermuk. The waters of Jermuk are famous for their healing properties which are said to cure numerous ailments of the digestive tract and to improve overall body health. The mineral waters near Jermuk are quite hot, averaging 50-60 ° C. Many Armenians come to Jermuk to taste these healing waters, and bottled versions are commonly sold in shops and supermarkets.

The thick and fermented milk product matsun can also be enjoyed as a drink, particularly in summer when it is diluted with cold water and drunk to quench thirst. Matsun has a high nutritional value and is believed to be beneficial for the digestive and immune systems due to the presence of lactic acid bacteria.

Armenians are also passionate about coffee, which is served to guests, enjoyed as part of an Armenian breakfast, drunk at work, shared with friends and present in nearly any social setting. As a rule, coffee in Armenia is prepared Turkish-style and is served strong with a thick foam. To quench thirst, cold water is usually served alongside the coffee.

Armenian food satisfies with its many variations of beverages, soups and meat, fish and dairy dishes. One trip is hardly enough to try them all, so you may just have to return to Armenia again and again to discover all that Armenian cuisine has to offer. 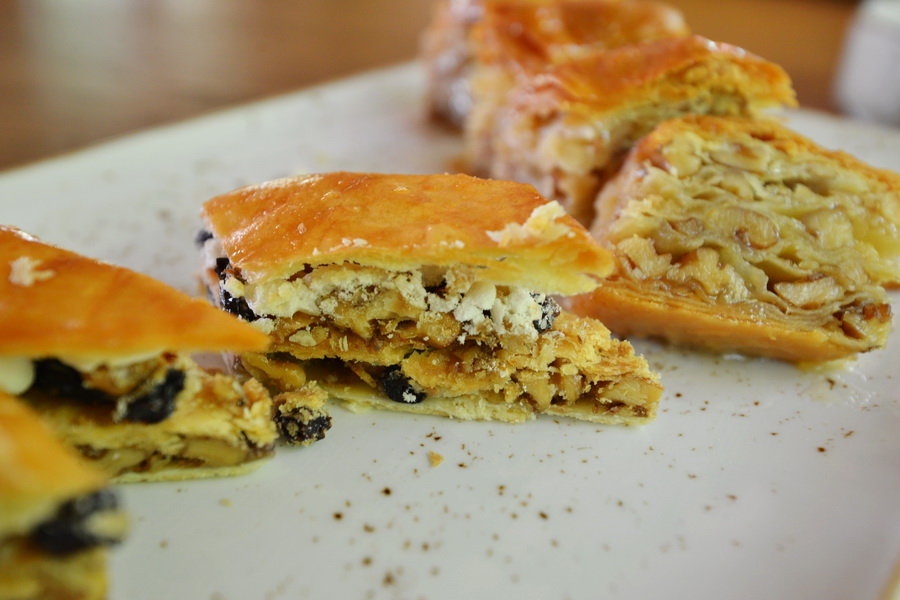 The most known Armenian sweets are kyata and nazuk - original multilayered pies with stuffing. Each layer is soaked with drawn butter and sugar – as a result kyata and nazuk have such melting dough and mild taste.

Everyone has heard of baklava – delicious puff honey cookie with a thick nut stuffing. This and other sweets came to Armenia from Turkey and Arabian East.

Vegetables and Fruits in Armenia 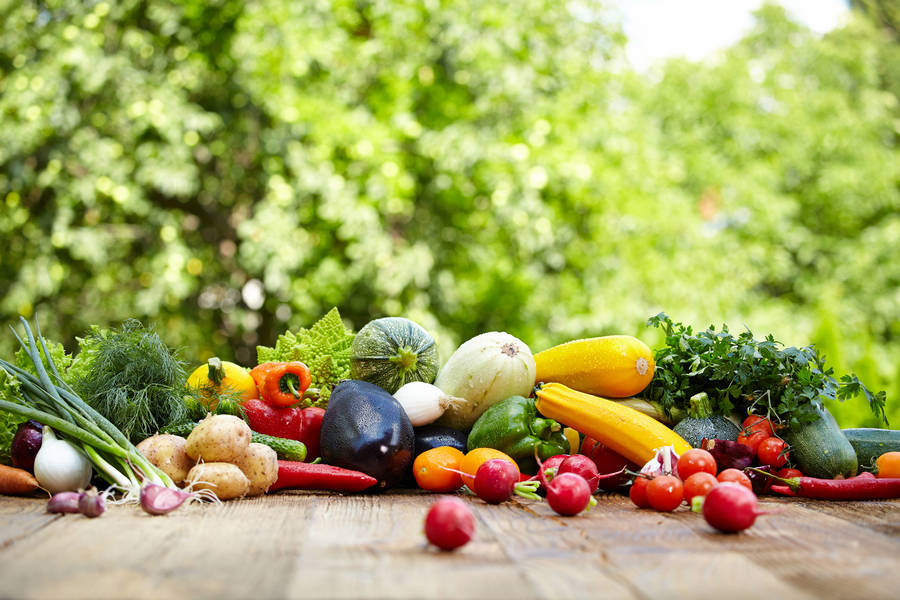 Armenians are very serious about using vegetables and fruits. Like everywhere in Transcaucasia they are eaten raw, dried, pickled and marinated; besides, they are obligatory ingredients for making soups and main dishes. Not only vegetables but fruits (quinces, cherry plums, lemons, pomegranates, raisins, dried pitted and halved apricots) are also widely used when cooking meat and fish which results in their original taste.