The main tourist sights around Baku

60 km to the south of Baku there is a place called Gobustan - the largest collection of rock paintings. The entire 100 sq. m complex consists of more than 4 thousand unique rocky sites, caves, rocky fortresses and burial grounds. Covered with 10,000-year-old petroglyphs these monuments of history are united into historical and cultural reserve.

Gobustan's petroglyphs are unrivalled by no other in terms of historic periods coverage. Over 6 thousand ancient masterpieces describe real events from 10-8 millennia BC to Middle Ages. Right here at the foot of Mount Beyuk-dash a Latin inscription was found testifying about Roman armies stay near Baku.

30 km to north-east of Baku is the settlement Surakhany where the unique fire-worshippers temple complex Ateshgah is located (17-18th centuries. The first structures were built in 2 nd century BC). Ateshgah is a place of sacred "fires" – burning natural gas outlets. For millennia Ateshgah being the worship center was also used by the Great Silk Road merchants as caravanserai or as one of the important visiting places. 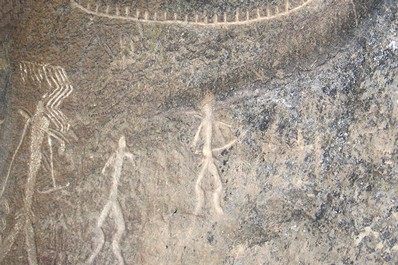 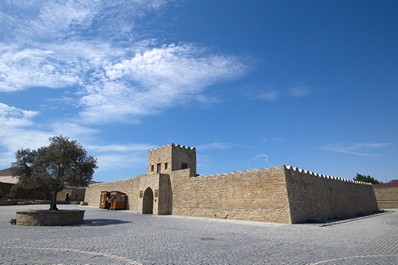 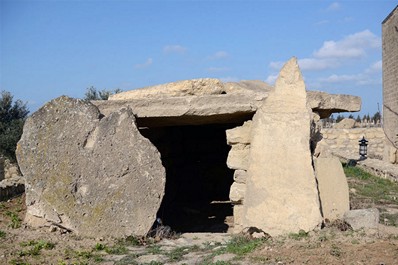 Forty kilometers from Baku there is Gala, the well-known open-air historical and ethnographic museum. The museum, founded in 2008 at an archaeological site located in the same-name village, is dedicated to the history of the Absheron Peninsula. There, you can see how the Azerbaijani lived, what they ate and drank and how they managed a household over the period from the XVI to XIX centuries.

In the northern part of Absheron by the sea stretches the zone of resorts and recreation facilities: Mardakyan - a well-known seaside resort where holiday makers in addition to rehabilitation programs can take a walk to Tuba-Shakhi Mosque ( 15th century) and enjoy the sight of two ancient castles. Resorts Buzovna, Bilgyakh, Pirshaga are well-known for their therapeutic muds and mineral water. Resort Shikhovo constructed on hydrosulphuric wells is also very attractive. Bailovo settlemetnt mighr also be considered as a tourist's attraction. There you can witness the sunken ruins of “Baiyl hesri” (13th century) – one of Baiyl castles. In the northeast of the country is located the city of Shabran which once was a part of Middle Ages Derbent defensive installations.

There in a narrow Dzhalgan corridor between the ridges of Major Caucasus and the Caspian Sea coast the entire system made of walls and defensive installations has survived. Along with that the area's system of fortifications includes Ghilghilchai fortresses (Shabran, 7th century), Beshbarmag (3rd-5th centuries), Chyrag-kala mountain fortress (5th century), etc.